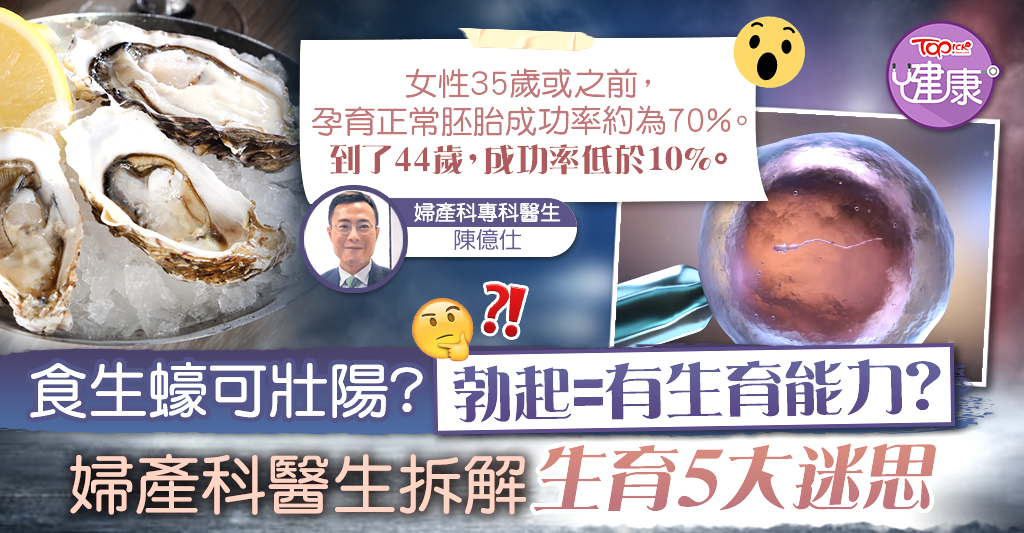 To be able to get pregnant successfully, the process can be described as “passing five barriers and six generals”. To be successful, men must eat more oysters? The radio program “Healthy 100 Mistakes” invited Chen Yishi, a specialist in obstetrics and gynecology, to dismantle 5 major myths about fertility, such as whether eating raw oysters can aphrodisiac, whether erection means fertility, and using designated sexual intercourse can improve the chance of pregnancy.

Dr. Chen said in the program that if you want to have a successful childbirth, you need to have enough healthy sperm, enough speed, and a normal body. Because after ejaculation, the sperm has to swim through the cervix, uterus, and then to the fallopian tube, which is quite a distance. If the sperm morphology is abnormal, such as two heads, two tails, no head and no tail, or “contracted tail”, it will not work. In addition, sperm DNA needs to be sound, otherwise, even a successful conception will increase the risk of miscarriage.

Dr. Chen said that this statement is not entirely correct. Because many trace elements, such as zinc, vitamin C, vitamin E, vitamin B12, vitamin D, coenzyme Q10, copper, iron, etc., are also beneficial to sperm and help improve sperm quality. Oysters are indeed rich in zinc, but eating 2 to 3 a day is enough. If you eat more than 6, it will exceed the daily intake and may cause diarrhea.

Does a successful erection indicate fertility?

Many men think that it is enough to successfully ejaculate semen, but semen and sperm are two different things. In addition, it also depends on the female reproductive age. He pointed out that the saying “you have a young boy while you are young” is correct and you can’t wait too long. Because women are 35 years old or before, the success rate of each egg producing a normal embryo is about 70%. By the age of 44, the success rate will be less than 10% and become single digit.

Read Also  Is it difficult for F1 drivers to leave the country by contract if they boycott the race? / F1 Saudi Arabian Grand Prix[F1-Gate .com]

Does the acidity and alkalinity of food affect the gender of the baby?

It has been circulated on the Internet that the acidity and alkalinity of food have the opportunity to affect the gender of the baby. Why would anyone choose a gender? Dr. Chen pointed out that from a medical point of view, some genetic diseases are passed on to males but not females. If you can choose to have female babies, you can avoid certain genetic diseases. In addition, many people think that the sex of the baby is determined by the sperm, but in fact it is the egg that determines whether the X sperm or Y sperm is allowed to enter.

Does using specific sexual intercourse increase your chances of getting pregnant?

It has been circulated on the Internet that women are more likely to conceive if they lie down when they have sex. Dr. Chen pointed out that there is currently no scientific research data, and it is difficult to ask a large number of couples to do experiments to confirm. However, in terms of artificial insemination, there are related studies that put the sperm in the back of the uterus, lie down for 20 or 30 minutes and then get out of bed, the chance of pregnancy success will increase by about 5% to 10%.

Is “Semen Storage” more likely to get pregnant after one use?

Dr. Chen said that many studies have shown that the longer the sperm is stored, the worse the quality, including motility and morphology, and the probability of DNA breakage will also increase. He advises couples who want to have children to ejaculate about every 3 days.

Intercourse time also affects the success rate of conception? Dr. Chen said that a study compared the morning and afternoon time, and men ejaculated better before 7:30 in the morning, and the sperm count was 30% higher than that in the afternoon.

The hket App has been fully upgraded, and TOPick has launched a series of parent-child, health, entertainment, Hong Kong news and leisure life information and videos for everyone. Download now: bit.ly/34FTtW9

The Yomiuri Shimbun is in the process of coordinating the Foreign Ministers’ Meeting on the occasion of the G20
Posted onJuly 5, 2022July 5, 2022

Shohei Ohtani “The backside of the top of the Buddha” … The truth about the transfer information that the famous reporter said now is “The team is holding back with all its might” | Smart FLASH[光文社週刊誌]
Posted onJuly 5, 2022July 5, 2022
Menu