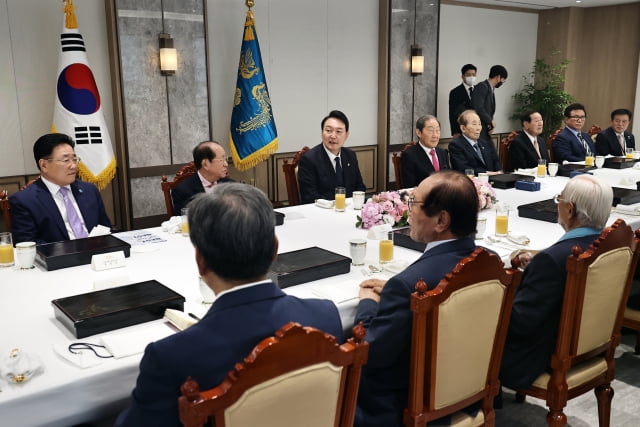 President Yoon Seok-yeol speaks at a luncheon meeting invited by the People’s Strength Standing Advisory Group held at the reception room of the presidential office in Yongsan on the 21st. / Photo = News 1

President Yoon Seok-yeol met with the People’s Power Standing Advisory Board on the 21st and joked, “Ah, I thought it was a bit wrong to say that I should just work there (the Blue House) and go to Yongsan.”

President Yoon said this at a meeting with about 20 standing advisors for the People’s Power, including former Deputy Prime Minister Hwang Woo-yeo, at the Presidential Office in Yongsan, Seoul on the same day. It is the first time since the last presidential election that President Yoon and the People’s Strength Standing Advisory Group met.

First, President Yoon greeted, saying, “Thanks to the seniors who have dedicated themselves to the country and watched our party for many years, it is difficult, but they have regained government power and are fighting hard in the face of the economic crisis.”

President Yoon continued, “I feel a bit late today (for luncheon),” he said.

President Yoon Seok-yeol speaks at a luncheon meeting invited by the People’s Strength Standing Advisory Group held at the reception room of the presidential office in Yongsan on the 21st. / Photo = News 1

President Yoon also joked about the relocation of the Oval Office.

President Yoon said, “There are many people who worked at the Blue House, so how about coming to Yongsan?” “I also went to the Blue House a few times during meetings and visited the official residence once. I was like, ‘Is it wrong?'” he said. Then laughter erupted among the attendees.

He continued, “After working here for over a month, the view is cool, and anyway, since it is a space where 700 to 800 people can comfortably use one building, the chief secretary, secretary, and administrator all come and go to each other.” “If there are urgent issues in my room without a reservation in advance, I can come in right away and have a meeting, so it’s good to work.”