The 2021 P4G Seoul Green Future Summit ended on the 31st. P4G (Partnering for Green Growth and the Global Goals 2030) stands for green growth and solidarity for the UN’s Global Goals 2030. At this P4G meeting, carbon neutrality was the central theme for overcoming the climate crisis. It is carbon-neutral to increase renewable energy such as solar and wind power and minimize the use of fossil fuels, but absorb the greenhouse gases emitted at that time to make the net emission’zero’.

The first environmental multilateral summit held in Korea was attended by 68 domestic and foreign top and high-level personnel, which was much larger than the first meeting held in Denmark in 2018. The Korean government has succeeded to some extent in showing off its green leadership in a situation where the sense of crisis about climate change is heightening. South Korea and President Moon Jae-in took part in the 2050 Carbon Neutral Declaration announced in October last year by holding this meeting. As stated by the International Energy Agency (IEA) at the meeting, 44 countries, which already account for 70% of global emissions, have declared carbon neutrality, but it cannot be said that Korea, the P4G chairman, will withdraw. 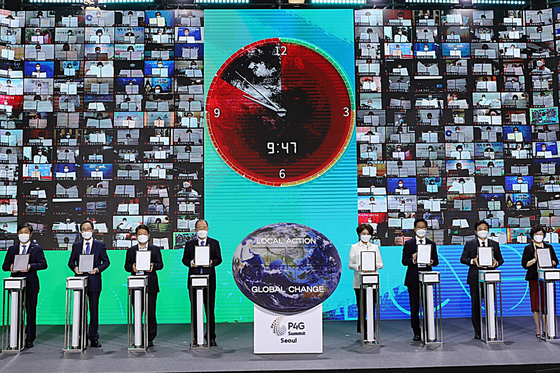 However, Korea, which is less prepared, is under intense pressure from both developed and developing countries. At the Climate Summit hosted by US President Joe Biden on April 22, developed countries announced that they would cut emissions in 2030 to half of the previous highest emissions. President Moon announced that he would come up with a new reduction target only then and this time in November. On the 28th of last month, the National Pension Service declared that it would not invest in domestic and foreign coal power plant projects, and the government launched the Carbon Neutrality Committee on the 29th, a weekend, was an urgent package ahead of this meeting. Environmental organizations also held demonstrations criticizing the P4G event for this reason. He pointed out that the government does not make substantial efforts to respond to the climate crisis, but only does’green washing’ pretending to work hard.

Anyway, the feast is over, and now there is only a bill to pay for showing off green leadership. First of all, the reduction target is raised. Korea’s current reduction target is to decrease by 24.4% compared to the peak in 2017. Considering the fact that the target for 2030 as announced by Mongolia, a country affected by climate change, is 27.2%, the Korean target should be more than 30%. This means that as of 2030, more than 40 million tons per year should be further reduced, and even if a reduction cost of 20,000 won per ton, which is the transaction price of emission permits, is applied, additional costs of more than 800 billion won will be incurred. 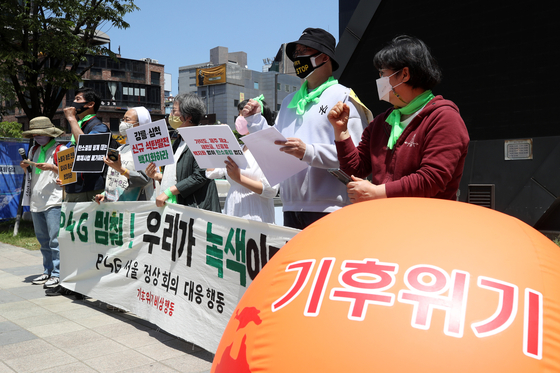 Members of a civic group are holding a press conference at Hanbit Square in Cheonggyecheon, Jung-gu, Seoul on the 30th of last month. [뉴스1]

The European Union has also raised a carbon border adjustment tax. It is a kind of trade tariff applied to avoid disadvantages of the country when importing goods and services from countries with weak greenhouse gas emission regulations. Even if we do not expand the supply of new and renewable energy or introduce a carbon tax, we have to pay for exports.

Developing countries have called for a $100 billion annual funding commitment promised by developed countries in the signing of the Paris Climate Agreement. From the perspective of developing countries, Korea is also an advanced country that must be shared. President Moon also promised to expand official development assistance (ODA) in the opening speech of the conference. It also announced that it would provide an additional $5 million to the Global Green Growth Organization (GGGI) and $4 million to P4G. Since it is a yard that has taken on the role of a bridge between developed and developing countries, there is no choice but to keep opening the pockets.

The domestic situation is also absolutely challenging. The plan for cutting 300 million trees and afforestation of 3 billion trees by the Korea Forest Service for carbon absorption is controversial. Although similar policies are being promoted in the United States and Japan, it is inconsistent with the public sentiment to consider cutting 30-year-old trees as old trees just to speed up carbon absorption. The government’s policy to expand new and renewable energy is also experiencing difficulties due to controversy over environmental damage, opposition from local residents, and unemployment problems due to the coal and nuclear power plant policies.

If carbon neutrality is an unavoidable trend, we must squeeze wisdom. As pointed out by the leaders of each country at this meeting, there is no choice but to break through with new technology development, system innovation, and international cooperation. But more important is domestic communication. If the government pushes, carbon neutrality does not just come true. It is imperative to achieve a great transformation that everyone can accept through tough dialogue with industry, labor, civil society, and local residents. Even opposition lawmakers participated in the National Climate Environment Conference, which was established in 2019 to resolve fine dust, but there was no such attempt at the formation of the Carbon Neutral Committee this time. The National Assembly has not even started to discuss the details of the climate crisis bill.

President Moon said that it is possible to achieve carbon neutrality in 2050 at the inauguration ceremony of the Carbon Neutral Committee, but considering the term of office, it will be up to the next regime to tighten the belt. Like the Lee Myung-bak administration, which gave up a pile of coal power plant permits at the end of the regime after promoting green growth, and the Park Geun-hye administration, which postponed to replace 11.3% of emissions by overseas reductions, the Moon Jae-in administration seems to be incapable of criticizing the criticism that it is only contemplating and throwing away bombs.

May 30, 2021
We use cookies on our website to give you the most relevant experience by remembering your preferences and repeat visits. By clicking “Accept All”, you consent to the use of ALL the cookies. However, you may visit "Cookie Settings" to provide a controlled consent.
Cookie SettingsAccept All
Manage consent