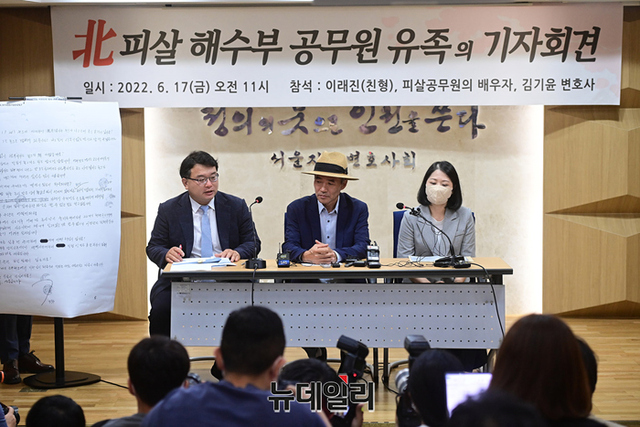 The family of a public official who was killed by the North Korean army decided to file a complaint with the then-Chief Kim Hong-hui and other officials of the maritime police following the Blue House.

In a telephone interview with New Daily on the 20th, Lee Rae-jin, the older brother of the late Lee Dae-jun, a public official who was murdered in the West Sea, said, “The subject of further accusation is the Coast Guard.”

Lee said, “At 3:40 pm on the 22nd, the results of the request for information disclosure targeting the National Security Office will be released by the High Court.

Mr. Lee argued that his brother’s murder case was “a state-run nongdan and spy manipulation case” and that “the (Moon Jae-in) government defined it as a defection to North Korea.”

Regarding the last week’s apology to the media by the Coast Guard, Mr. Lee continued to show distrust, saying, “Isn’t it a gesture?” Lee continued, “Now that a fact-finding committee is formed, it will be revealed soon.”

In particular, with regard to former President Moon Jae-in, Mr. Lee raised his voice, saying, “In the beginning, I sat still and held a press conference about four times, but all the statements including the announcement were lies.”

When asked, ‘This case has only just been resurfaced, but will it be buried again?’, Mr. Lee said, “I don’t think it will be buried.” “Breakfast the next day with the fact-finding committee led by Representative Ha Tae-kyung and the People’s Power floor leader Kwon Seong-dong. We will talk with you about the direction of the specific investigation,” he explained.

Kim Ki-yun, a lawyer for the bereaved family, pointed out that, regarding Secretary Lee Kwang-cheol, “the accusation includes former secretary Lee.”

At a press conference on the 17th, Attorney Kim said, “Ex-President Moon died three hours after receiving a report on the murder of a public official. ” has been said.