[단독] Issuance of 1,000 trillion won in real estate development profits in the metropolitan area… Sharing profits with the public

“Conversion of real estate and virtual assets to digital financial infrastructure based on real value”
“If the U.S.-led digital key currency competition begins, it will be a stepping stone for G2”
“Virtual assets based on 1,000 trillion won development profit, rivals US Bitcoin and Ethereum”
“Real estate-based virtual assets, the subject of issue and transaction is the Blockchain Authority”
Captain, preparing for promise of virtual asset that connects energy

▲ In addition, Democratic Party presidential candidate Lee Jae-myung speaks at the ‘Youth Talks About Virtual Assets’ meeting held at the National Assembly Hall on the morning of the 10th. (National Assembly Photo Reporters)

The opinion of an expert group delivered to Democratic Party leader Song Young-gil, which was obtained exclusively by E2day on the 23rd, contains the concept of a ‘real estate-based virtual asset’ targeting such a digital key currency.

The statement said, “If we convert the real estate problem, which is one axis of social inequality, into virtual assets through blockchain technology, we can find a breakthrough.” “If we can have a creative next-generation blockchain payment network unique to Korea, we We can have a world-class digital financial infrastructure that does “If we can find a way to do that, we will be able to confidently jump into the competition for hegemony of digital financial key currency in the metaverse world (led by the United States) in the future.” It could be G2 in the world.”

This is connected to the policy idea presented by Candidate Lee as the proposal of Chairman Song. Candidate Lee announced at the Election Countermeasures Committee meeting on the 8th, “The National Assembly is supplementing the related system to recover unearned income from real estate development, but it is not perfect. Then, at the ‘Youth Talking About Virtual Assets’ meeting held at the National Assembly on the 11th, he said, “I will give the whole nation an opportunity to invest in real estate development profits and issue and pay coins. It is also the right to take a profit compared to the investment amount generated from the development profit, and when it is used as a transaction method, it itself functions as a currency. That’s what we’re designing for.” 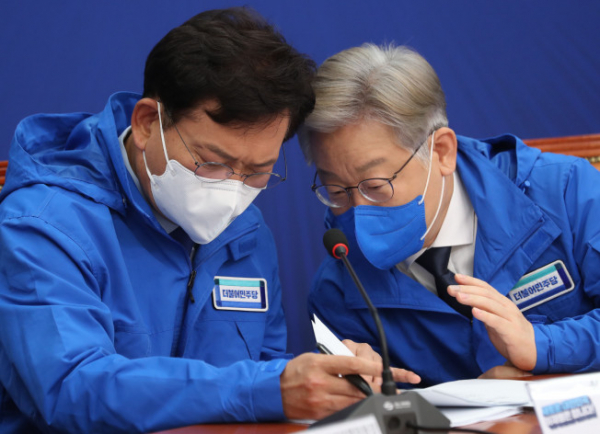 US politicians are devaluing virtual assets over concerns about the threat to the dollar’s position. However, recently, AMC, the largest movie theater chain in the United States, is also taking the lead in digital currency preoccupation with the private sector, such as launching an online payment service using Bitcoin (BTC) and Ethereum (ETH).

This expert emphasized that the subject of the issuance and transaction of the virtual asset is the ‘blockchain agency’, not the government. He said, “Since last year, we have prepared a draft bill to establish a new blockchain agency under the Ministry of Science and ICT,” he said. “It is completely different from CBDC (Central Bank Issued Digital Currency),” he added. In fact, at a press conference in Busan on the 18th, CEO Song insisted on the establishment of a blockchain agency and announced that he would discuss making a promise with Lee.

The Election Commission is not yet at the stage of making promises. Rep. Lee Jae-myung-gye said, “It is not a stage to make a concrete promise, but it is unavoidable to think about the promotion of virtual assets.” Another lawmaker said, “It is true that candidate Lee is considering the direction of special promotion of virtual assets.” Furthermore, a promise to link energy with blockchain is also being conceived. Candidate Lee previously made a pledge to build an ‘energy highway’ that would open a power grid where anyone could freely produce and sell new and renewable energy. The expert said, “I was asked to prepare a pledge to link energy with blockchain from the candidate’s side.”

Small business owners who cannot compensate for their...

The director of SABO reveals that the bonds...

Ford launched its own charging pile, but Tesla...

The shortage of chips urges new automakers to...

Global pharmaceutical companies such as Pfizer and Moderna…...

The millet vehicle plant is located in Yizhuang,...