SK Hynix CEO Lee Seok-hee (pictured) received a special commission for normalization after acquiring Intel’s NAND flash business unit in the US. It is to stay in the US for more than half a year and focus on stabilizing Intel’s NAND flash business. SK Group, which is strengthening its North American business, is strengthening its flagship semiconductor business following batteries.

According to industry sources on the 28th, it is known that the Chinese competition authority’s approval for a business combination related to SK Hynix’s acquisition of the US Intel NAND business is in the final stages.

SK Hynix signed a contract to acquire Intel’s NAND business for $9 billion (about 10.3 trillion won) in October last year. Since then, the competition authorities have been reviewing the merger approval for the past year. It has received approval from 7 of the 8 countries subject to review (US, EU, Korea, Taiwan, Brazil, UK, Singapore), and is currently awaiting approval from China.

SK Hynix initially expected the completion of the approval by the competition authorities at the end of this year, but the review is delayed due to the deterioration of US-China relations. If the regulatory approval is completed by the end of this year, SK hynix plans to pay $7 billion to Intel for the first time and transfer Intel’s NAND SSD (solid state drive) business and assets from its Dalian plant in China to SK hynix. After that, in March 2025, the remaining $2 billion will be paid to Intel and the remaining assets such as Intel’s NAND flash wafer design and production related patents (IP) and R&D personnel will be taken over.

See also  [US market conditions]Stocks have fallen sharply since June-dollar rises due to escape demand, yen is strong-Bloomberg

SK Hynix hopes that the Chinese competition authorities will approve the merger related to the acquisition of Intel’s NAND business. If approved, SK Hynix’s difficulties are expected to be largely resolved. First of all, because of the relationship with the United States, the family is threatening Korea, but there are also analyzes that NAND is highly likely to be approved by the Chinese government because there are many suppliers and competition is fierce.

Along with the acquisition of Intel’s NAND business, SK Hynix plans to establish a separate company to manage it. As the CEO of the new company, the current senior vice president of Intel and general manager of NAND products has been hired.

With the appointment of the person in charge of NAND flash at Intel as the CEO of the new corporation, industry analysts say that SK Hynix is ​​a strategy to keep Intel’s existing customers as they are. The new corporation will be headquartered in California, USA, and it is known that it will conduct business not only in the United States, but also in China, Taiwan, Poland and the United Kingdom. 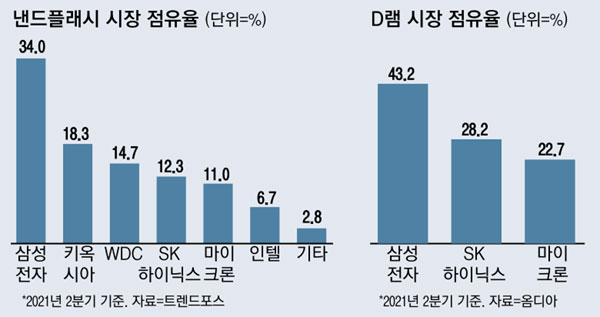 If SK Hynix acquires Intel’s NAND division, it will jump to second place in market share after Samsung Electronics at once.

According to TrendForce, a market research firm, as of the second quarter of this year, Samsung Electronics ranked first with a market share of 34.0%. The combined market share of SK Hynix (12.3%) and Intel (6.7%) is 19.0%, slightly ahead of Kioxia (18.3%), the second-largest company.

After the acquisition of the business division, SK Group entrusted all powers for stabilization to CEO Lee Seok-hee. President Lee is an Intelman who worked as a process expert at Intel in the United States from 2000 to 2010. It is also known that President Lee led the process of acquiring Intel’s NAND business last year. It is reported that SK Hynix Vice Chairman Park Jung-ho will take over the existing business of SK Hynix for the time being with President Lee traveling to the United States.

SK Group is also strengthening its North American business, including SK Hynix. SK Group Chairman Chey Tae-won, who went on a business trip to the United States on the 27th, is also known to meet with major political figures, including local politicians, to request support for SK Group’s local business.

As the group’s core businesses, such as semiconductors, batteries, and energy, are being developed centered on North America, SK Group plans to create a dedicated organization that closely communicates with the US government. It is expected that Yoo Jung-joon, Vice Chairman of E&S, will move to the current general vice president. In addition to SK Hynix, SK Group is also rapidly expanding SK On’s battery business in the US.

More than 800 firefighters have been put into the fire fighting work in Zayu County, Tibet

Yoon Yeo-jeong, the first Korean to receive an Academy Award, receives the Order of Cultural Merit

Merger view between DTAC and True