[도시재생뉴딜 개편] 5 years of introduction of urban regeneration, Myeong and Am… ‘Regional economic base’ development transition

◆Since its first introduction in the 2000s, support has been sluggish…What is an urban regeneration project?

According to the report of the Ministry of Land, Infrastructure and Transport’s Urban Regeneration Information System Portal and the National Assembly Legislative Investigation Agency, urban regeneration refers to a city that is in decline due to a decrease in population, changes in industrial structure, indiscriminate expansion of cities, and aging of the residential environment, etc. It refers to economic, social, physical, and environmental activation through utilization and introduction and creation of new functions.

In simple terms, it can be said that it is a policy or project to revitalize urban functions by reinvigorating a declining city.

In particular, in the case of Korea, the need for urban regeneration is further emphasized because urban decline such as population decline, industrial stagnation, and deterioration of living conditions is deepening in two-thirds of all cities due to the low birth rate and the rapid aging of the population, threatening the future competitiveness of the country. have.

However, the history of urban regeneration in Korea is not long. Since 2000, examples of foreign urban regeneration have been introduced to the general public through the restoration of Cheonggyecheon and the New Town project in Seoul. The term “Urban Regeneration” itself has been adopted in Korea as it is, since the concept that was used in England was translated and introduced in Japan in the 2000s as ‘urban regeneration’.

This is because, despite the need for maintenance projects, redevelopment and reconstruction did not proceed in areas where it was difficult for low-income indigenous people to resettle and urban vitality had significantly declined as housing prices soared after the maintenance project.

According to Kim Ye-seong, a legislative investigator at the Economic and Industry Investigation Office of the National Assembly Legislative Investigation Office, the government selected the urban regeneration R&D project as one of the ‘VC (Value Creator)-10 projects’ at the time of the Ministry of Land, Transport and Maritime Affairs (currently the Ministry of Land, Infrastructure and Transport) in 2006 to solve these problems. A budget of about 100 million won was invested, and in 2008, the Urban Regeneration Division was established in the National Land Policy Bureau. 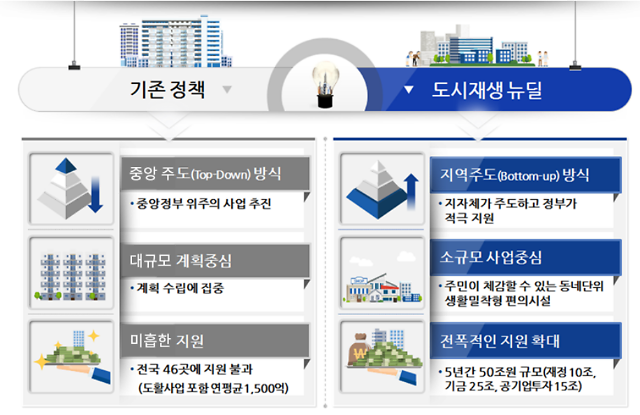 What differentiates the Urban Regeneration New Deal project from the existing urban regeneration projects is that the central government or local governments are less involved and the local community takes the lead. In particular, unlike existing policies that focused on improving the physical environment of a declining city center, the Urban Regeneration New Deal comprehensively dealt with the government’s major policies from rental housing supply to welfare policies, industrial development, and job creation for youth.

Based on this, the types of projects to which financial resources are invested were also divided into five categories: △Economic-based type, △Central city area, △General neighborhood type, △Residential support type, and △Innovative district.

However, such an urban regeneration New Deal project was engulfed in criticism five years after its inception. It is because of the lack of clear concrete results despite a huge investment of 50 trillion won over five years. A number of local governments applying for the project also relied on the tourism industry as a way to revitalize the city. In response, some criticized exaggeratedly that they spent 50 trillion won over five years to create a mural village, and argued for abolition of the policy along with a change of government.

However, such concerns have already existed since the time when the Urban Regeneration New Deal project was selected as a key policy of the Moon Jae-in government. This is because, unlike the existing total demolition type redevelopment, the prevailing outlook was that it would be difficult to achieve results in a short period of time to emphasize the supply of living SOC (social infrastructure) and the participation of residents.

◆Government major reorganization of policy direction… Supports only ‘businesses that can be done’, such as regional economic bases

The new government decided to maintain the urban regeneration project policy itself, contrary to the existing concerns about disposal. However, the direction of the previous urban regeneration New Deal project was drastically revised.

The ‘New Government Urban Regeneration Project Promotion Plan’ announced by the Ministry of Land, Infrastructure and Transport on the 27th will focus on the creation of an economic base, regional specialization projects, and public-private cooperation. In other words, the direction was chosen to promote regional development by creating a large-scale economic base in a declining city.

Accordingly, the project types that were previously classified into five will be consolidated into two types, △economic regeneration and △locally specialized regeneration, and about 40 new projects will be selected every year.

In particular, the government is planning to actively promote the ‘innovation district project’ to create a base facility with a large economic ripple effect in the decaying original downtown with an emphasis on economic regeneration. This is a project for complex development of urban functions such as residential, business, and commercial, and provides financial and fund support, and grants special urban and architectural exceptions such as reduction of floor area ratio.

In addition, it will promote urban branding using local resources such as history and culture, and revitalize central and alley commercial areas by creating specialized streets. The plan is to support the Housing City Fund for rental shopping malls and start-up spaces.

The evaluation method also directly evaluates development projects and project effects rather than local community-led urban vitality restoration effects that are difficult to measure quantitatively, such as urban regeneration revitalization plans, and decides whether to expand or reduce government subsidies according to the progress made. It is intended to provide ‘incentives’ to revitalize urban regeneration projects.

The Ministry of Land, Infrastructure and Transport will hold a briefing session on the 28th to discuss the direction and future schedule for each local government. After that, the competition will be held in the following order: pre-consulting in August-September, project submission in September, feasibility/feasibility evaluation in September-November, consultation with related ministries in November, and deliberation and project selection by the Special Committee on Urban Regeneration in December.

Kim Sang-seok, head of the Urban Regeneration Project Planning Team of the Ministry of Land, Infrastructure and Transport, said, “According to the new urban regeneration promotion direction, we have focused on supporting large-scale projects such as the creation of economic bases from the existing SOC supply-oriented projects. We will do our best to select only high-quality projects,” he said.