Former lawmaker Kwak Sang-do, who has been mentioned in the so-called ‘5 billion club’ in connection with the Daejang-dong development lobby and suspicions of preferential treatment, is leaving the Seoul Central District Court after completing the interrogation of the suspect before arrest on the afternoon of the 1st. Reporter Park Jong-minOn the 1st, the court dismissed the arrest warrant for Kwak Sang-do, a former member of the People’s Power, who was involved in the controversy over his son’s 5 billion won severance payment from Hwacheon Daeyu. After two days of being summoned as a suspect, there was an attempt to secure a new recruit, but the arrest failed, and some analyzes suggest that there was not enough basic investigation to support the allegations raised.

As a result, the prosecution’s investigation into the so-called ‘5 billion won promise club’ of Hwacheon Daeyu, which has recently started in earnest, is expected to have some setbacks. This is because, among the people mentioned in relation to this club, the investigation of former lawmaker Kwak, who seemed to have progressed the most, failed to substantiate the charges, and additional investigations such as collecting evidence and reinforcing logic to prove the charges are inevitable.

At around 11:20 pm on the same day, the Seoul Central District Court’s deputy chief judge in charge of warrants dismissed the arrest warrant requested by the prosecution for Kwak, a former member of the National Assembly who is charged with mediation under the Specific Economic Aggravated Punishment Act. Judge Seo explained the reason for the dismissal, saying, “There is room for contention over whether a crime has been established, and while it seems that the suspect’s right to defend is necessary, there is a lack of explanation for the reason, necessity, and relevance of the arrest.”

Rep. Kwak received a request from Kim Man-bae, the major shareholder of Hwacheon Daeyu Asset Management (Hwacheon Daeyu), a private enterprise in Daejang-dong, along with a proposal to distribute the profits from the business. He is accused of receiving 2.5 billion won (5 billion won before tax) in the name of severance pay through his son Byeong-chae. The 2.5 billion won was calculated after deducting taxes and actual severance pay out of the nominal amount of 5 billion Byeong-chae received while leaving the company.

Specifically, in 2015, the prosecution received a request from former lawmaker Kwak Man-bae to share the business profits from Mr. is considered to be When Company B, the parent company of Company A, which had participated in the Korea Development Bank consortium, which was a rival at the time, attempted to recruit Hana Bank, Mr. Kim asked former lawmaker Kwak to avoid the crisis. It was the gist of the allegation related to the allegation.

Kim Man-bae, the largest shareholder of Hwacheon Daeyu, appears at the Seoul Central District Court in Seocho-gu, Seoul on the morning of the 3rd to receive an interrogation of the suspect (warrant substantive examination) before his arrest. Reporter Lee Han-hyungAt the substantive examination of the warrant held this morning, the prosecution, based on the past remarks of Kim Man-bae, the major shareholder of Hwacheon Daeyu, who had been charged earlier, and the statement of accountant Jeong Young-hak, the real owner of Cheonhwa-dongin No. It is said that he emphasized that the circumstances in which he received a large sum of money in the name of severance pay are not irrelevant to Kwak’s role. In particular, it is reported that the severance pay that Byeong-chae received was too high compared to other Hwacheon Daeyu employees, and that the money was actually managed by former lawmaker Kwak, not Byeong-chae, during the investigation process, claiming that it was a mediation. .

On the other hand, former lawmaker Kwak’s side completely denied the allegations, saying that the prosecution did not specify the specific solicitation target and contents, and that the evidence to support the allegation was only the words of those involved in Daejang-dong. After meeting with reporters after the warrant substantive examination was over, former lawmaker Kwak said, “The exact circumstances, date, and place of the solicitation did not come out precisely in today’s examination. He said that in the past, Kim Man-bae had talked to lawyer Nam-wook about such a thing.’ There is no data other than that.”

In addition to Kwak, former Special Prosecutor Park Young-soo, Money Today Chairman Hong Seong-geun, and former Supreme Court Justice Kwon Soon-il are mentioned in the club. Prosecutors launched an investigation into the allegation of former member Kwak at the end of September and before calling on former member Kwak on the 27th of last month, the prosecution conducted an investigation into the surrounding areas, including Mr. continued On the 17th of last month, a week after Kwak resigned from his office, the house and office of Kwak and the headquarters of Hana Bank were also raided and searched.

After concentrating investigative power in this way, the arrest warrant requested for Kwak, the first among the clubs with a promise of 5 billion won, was dismissed at the court stage, and critics also criticized that the collection of evidence and logical structure to substantiate the charges were insufficient despite the investigation that took a considerable amount of time. follow Some voices point out that a prompt investigation into Kwak, a former member of the National Assembly, was not carried out in the early stages of the allegations.

However, the prosecution’s investigation team is said to be of the position that there were many obstacles to the investigation as former lawmaker Kwak was a member of the National Assembly until the 11th of last month, and since the allegations were raised more than 7 years ago, sufficient time was needed to collect evidence and statements to prove this. . After closely analyzing the reasons for the court’s dismissal of the arrest warrant, the prosecution will also consider the need for additional subpoenas of former Rep. Authorities on the possibility of ‘herd immunity’ after the peak of Omicron “Can be expected in Korea” 8,571 new confirmed cases, the highest ever… 8,000 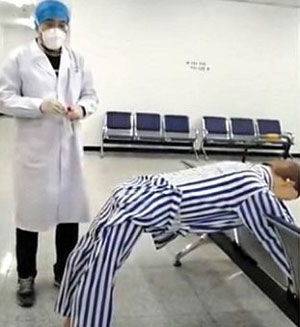 [사진 출처 = 웨이보] About two weeks before the opening of the 2022 Winter Olympics in Beijing, China’s health authorities have restarted the ‘corona 19