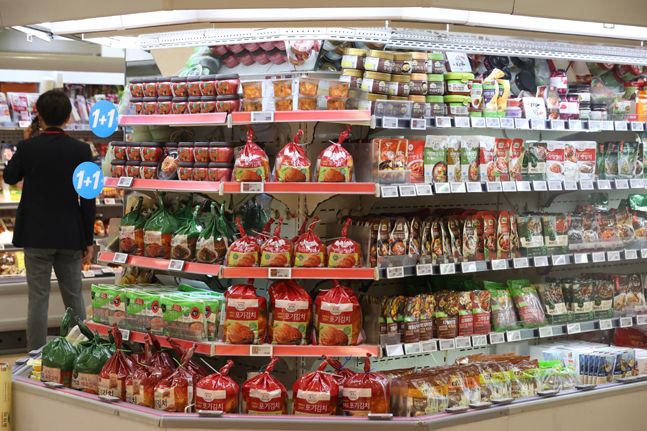 The market for makgeolli was reduced after the introduction of the system, but regained its place after 10 years

Packaged kimchi on display at a large supermarket in Seoul. ⓒYonhap News

The SME-suitable industry system, introduced in 2011, is now in its 11th year.

This system was introduced under the pretext of securing the ecosystem of small and medium-sized enterprises by restricting business expansion such as new entry by large companies and mergers and acquisitions.

In the first year, 37 items including kimchi, tofu, rice cake, soy sauce, and makgeolli were designated as suitable industries for the medium term.

However, as many of the industries that were selected as medium-term suitable industries have been converted to livelihood-oriented industries, it is pointed out that the time limit has become meaningless in reality.

Industries that have been protected by the system for more than 10 years have had side effects such as declining competitiveness rather than nurturing self-reliance, shrinking market size, and encroaching on foreign capital that is not subject to regulation.

In the case of kimchi, which was selected as a medium-term suitable industry in the first year of the introduction of the system, large corporations at that time had to withdraw their business from general restaurants and university restaurants. Expansion was restricted in middle and high school catering and military delivery markets, and a recommendation was issued to refrain from mergers and acquisitions targeting small and medium-sized enterprises (SMEs).

Although it was a recommendation, the government at the time strongly pushed it, so it was evaluated that it was practically the same as an obligation from the point of view of a company.

It is not an exaggeration to say that the Korean kimchi market, which has been 10 years in the making, has been occupied by Chinese. In the case of general restaurants, cafeterias, and food service markets, 85% of them are using Chinese kimchi.

The hygiene problem of Chinese kimchi is not a problem for a day or two, but the explanation of the related industry is that the price difference with domestic products is large, so we have no choice but to use Chinese-made kimchi for profit. This is especially true when the price of various food materials soars like this year.

An official from the food industry said, “Unlike other foods, kimchi has a large number of ingredients, so it is virtually impossible for small and medium-sized kimchi manufacturers to compete in price with Chinese products.

He also said, “Since kimchi is a fermented food, it is more difficult to pass various sanitary inspections when exported compared to other foods. added.

Makgeolli is sold at a large supermarket in Seoul. ⓒNewsis

The makgeolli market suffered a stagnation for a while after the system was introduced.

Along with kimchi, makgeolli, which was selected as a medium-term suitable industry in the first year, was also restricted from entering the domestic market by large corporations. In addition to limiting investment in new facilities for domestic sales, it also refrained from mergers and acquisitions of local distributors and manufacturers.

The domestic makgeolli market, which was around 500 billion won before designation as a suitable business, shrank to 300 billion won due to limited market competition.

However, although sales increased mainly by major manufacturers, difficulties at local breweries remain.

In the case of soy sauces such as red pepper paste, soy sauce, and soybean paste, there are constant criticisms about the side effects.

Following the mid-term suitable industry in 2011, it was designated as a suitable industry for livelihoods and continues to be protected by the law, but nothing has changed significantly, as products from large companies still occupy most of the retail market.

In the case of soy sauce, as it is a fermented food like kimchi, food hygiene management is important, and large-scale investment must be preceded for mass production.

Regulated large corporations are protesting against it, calling it reverse discrimination. In particular, there is great concern that foreign companies, in a regulatory blind spot, may take the place where domestic conglomerates are missing, such as in the franchise bakery industry.

An official from the food industry of large corporations said, “There are many small and medium-sized companies that manufacture soybeans that have long tradition and know-how, but it is not easy to succeed in the family business due to continuous management difficulties. There are a lot of ways to help from the side, but there is nothing we can do about it since it is blocked by regulations.”