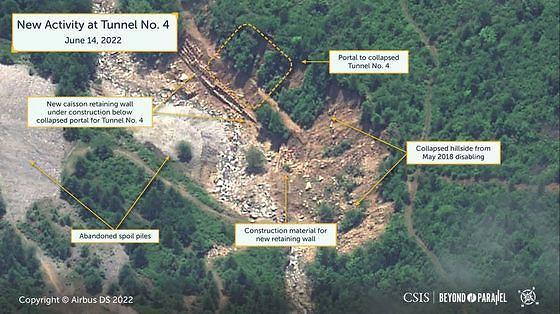 The International Atomic Energy Agency (IAEA) observes that North Korea, which has repeatedly tested intercontinental ballistic missile (ICBM) tests saying it is developing an artificial satellite, will launch a series of nuclear tests under the pretext of launching the South Korean launch vehicle Nuri (KSLV-II).

The reason is that, following the 3rd tunnel in the Punggye-ri nuclear test site in North Hamgyong Province, which North Korea declared shut down in 2018, a new recovery movement was detected in the area around the 4th tunnel. In particular, a 5MW (megawatt) nuclear reactor is in operation at the Yongbyon nuclear complex, a key site for North Korea’s nuclear weapons development, and movements in the Gangseon nuclear complex and the Pyongsan mine are continuing.

Tunnel 3 of the nuclear test site has been restored since the beginning of this year, and it is known that additional nuclear tests are now possible. In addition, on the 16th, a new concrete wall was caught at the lower part of the entrance to Tunnel 4 of the nuclear test site, and construction materials were also confirmed to be lying around. Recently, it was also confirmed that the road around the tunnel was being repaired.

According to the IAEA’s analysis, Tunnel 3 is for a nuclear test for tactical nuclear weapons aimed at South Korea, and Tunnel 4 is for a hydrogen bomb test.

Regarding the North Korean military’s trends, he said, “We are closely monitoring the overall trend, but there is nothing to explain further at the moment.”

North Korea launched an ICBM on February 27th and March 5th, claiming that it was a “reconnaissance satellite development test.” However, South Korea and the US dismissed it as “North Korea is trying to disguise an ICBM launch as a space activity.”

On the day of the first launch of Nuri in October of last year, North Korea aired a documentary film about the launch of the Earth observation satellite ‘Gwangmyongsong 4’ on February 7, 2016 through state-run Chosun Central TV.

Also, when the Nuri failed to enter orbit, through the Echo of Unification, an external propaganda medium, he expressed his discomfort, saying, “The launch of the Nuri has ended in failure.

The difference between the Nuri and North Korean ICBMs is their purpose. Although South Korea-style projectiles were developed for satellite launch from the beginning, North Korea made ICBMs from the outset by using pressure and negotiation cards with South Korea and the US.

According to the Ministry of Science and ICT (Ministry of Science and Technology) and Korea Aerospace Research Institute (Aviation Research Institute), the Nuri stood and fixed on the launch pad around 11:10 am the previous day. In the afternoon, Nurihuu completed the preparations for launch by connecting the umbilicals and checking the airtightness (checking the possibility of leaks such as connections) to charge the power supply and propellant (fuel, oxidizer), etc.

The Nuri launch is possible only when the temperature is between -10 and +35 degrees and the humidity is below 98% based on 25 degrees. Also, in the case of pressure, it is 94.7 to 104 kPA (kilopascals). The surface wind must not exceed an average wind speed of 15 m/s and a maximum instantaneous wind speed of 21 m/s. In addition, there should be no possibility of lightning discharge in the flight path. If there are no variables such as bad weather, it is expected that the launch will be at 4 p.m. on the same day.

If the launch of the Korean launch vehicle Nuri succeeds on the same day, four additional launches are scheduled to secure the reliability of the Nuri. The goal is to increase reliability through four repeated launches from 2023 to 2027, and to foster a comprehensive space launch vehicle system company by transferring launch vehicle technology to private companies.

Starting with the first nuclear test in October 2006, North Korea conducted six nuclear tests until September 2017. Since North Korea began to develop nuclear weapons in earnest, the international community has made efforts to resolve the North Korean nuclear issue through dialogue and sanctions, but denuclearization of North Korea is far from complete.

North Korea held an expanded meeting of the 5th plenary session of the 8th Central Committee of the Workers’ Party of Korea from the 8th to the 10th. A whopping five plenary meetings were held in one year and six months, including the first plenary session held during the 8th Congress of the Workers’ Party in January last year. Considering that a total of 12 plenary meetings have been held during the 11 years in power of North Korean leader Kim Jong-un, this is very unusual. This is proof that the situation on the Korean Peninsula is intensifying.

State Department spokeswoman Ned Price made it clear at a recent briefing that the situation on the Korean Peninsula was serious, saying, “We are concerned that North Korea may conduct a seventh nuclear test soon.”

IAEA Secretary General Rafael Grossi went one step further and analyzed that the activities at the Punggye-ri nuclear test site could be preparations for a series of nuclear tests.

The international community expects denuclearization through ‘unconditional dialogue’ with North Korea. However, North Korea continues to be ignorant.

Read Also  South Korea and U.S. "Choose whether it's a provocation or a dialogue"...to stop North Korea's nuclear test

Since the Ukraine crisis, North Korea has been outright pro-Russian, including opposing the UN Security Council’s statement condemning the invasion of Ukraine. It is read as an attempt to promote solidarity between North Korea, China and Russia in connection with the already strengthened North Korea-China relations.

However, in that the current situation is different from the Cold War that formed the bloc, the synergy effect of the North Korean, Chinese, and Russian solidarity is limited. This is because both China and Russia depend on the Global Supply Chain (GVC). North Korea’s upgrade of its nuclear capabilities, including an additional nuclear test, is also a burden on China in that it is likely to stimulate the public opinion on nuclear possession in South Korea as well as the forward deployment of US strategic assets.