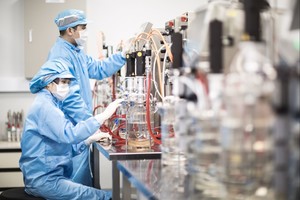 As the number of patients with high blood pressure in Korea increases every year, the market for antihypertensive drugs is growing rapidly. In addition, as the Korean Society of Hypertension recently recommended the appropriate use of a single combination drug in the treatment of high blood pressure, the development of related treatments has become more active.

According to the Korean Society of Hypertension, the number of patients with high blood pressure has increased every year to over 12 million. However, the continuous treatment rate of these patients is only 67.9%. Also, according to the Korean Society for Lipid and Arteriosclerosis, the number of dyslipidemia patients is increasing every year to reach 12 million, but the continuous treatment rate was only 40.5%. It is estimated that 68.3% of hypertensive patients with an LDL-C of 130 mg/dL or higher, but only 53.8% of hyperlipidemic patients being treated for dyslipidemia at the same time.

Daewoong Pharmaceutical is attracting attention by launching Olostar and Olomax to improve the convenience of treatment and medication compliance for patients suffering from hypertension accompanied by dyslipidemia. These products are characterized by the fact that they provide treatment options according to the characteristics and conditions of each patient by diversifying the content.

Olostar is an improved new drug developed by Daewoong Pharm. It is the world’s first combination drug that combines Olmesartan, a component for treating hypertension, and Rosuvastatin, a component for treating hyperlipidemia, into one tablet. Daewoong Pharm’s patented platform technology, a two-layer tablet formulation with controlled release rate, has been applied to optimize drug absorption in the body In 2015, it was selected as one of the top 100 national R&D excellence achievements in the 16th Korea New Drug Development Awards. In November last year, a study published in the American Journal of Therapeutics demonstrated the excellent adherence of Olostar, lowering blood pressure and improving lipids.

Olomax is a high blood pressure drug that adds amlodipine, a calcium channel blocker (CCB) to Olostar.‧It is a three-agent combination drug for hyperlipidemia. Like Olostar, the release rate double-layer tablet formulation was applied to optimize drug absorption in the body, and the tablet size was reduced to less than 1 cm to increase patient compliance. According to a study to evaluate the efficacy and safety of Olomax published in the Journal of Clinical Medicine in January 2022, Olmesartan in the Olomax group‧It was confirmed that the mean systolic blood pressure was significantly reduced compared to the rosuvastatin combination group.

In addition, the study also found that Olmesartan in the Olmesartan group‧Low-density lipoprotein cholesterol (LDL-C) was also significantly reduced compared to the amlodipine combination group. It is safe because serious adverse drug reactions do not occur, and has the advantage of being able to manage hypertension and dyslipidemia at the same time.

An official from Daewoong Pharmaceutical said, “Through a diverse lineup of complex drugs, we are helping hypertensive patients with dyslipidemia to improve their quality of life in old age by continuously managing their blood pressure and lipids and preventing complications such as major cardiovascular diseases.”

DWJ1451 is currently analyzing the results of phase 3 clinical trials to evaluate its efficacy and safety, and is about to apply for a domestic product license in the second half of this year. As Daewoong Pharmaceutical continued to conduct additional clinical trials for DWJ1451, it conducted a phase 1 clinical trial in which DWJ1541 and individual components were administered in combination at Chonbuk National University Hospital in November 2020 and January 2021. Two clinical trials were re-approved.