Run 1st in the world, including world gods, up to 100m, run back in the last section and lose medals
NHK “I want to give you a medal for a wonderful performance”… Breaking the Korean record in the 100m, semifinals

Hwang Seon-woo (18), a Korean men’s swimmer, leads the men’s 200m freestyle final at the Tokyo 2020 Olympic swimming held at the Tokyo Aquatic Center on the 27th (photo above). However, after 150m, he is showing a disappointing expression after finishing in 7th place due to lack of a back core. Tokyo = News 1 News

The medal dream was in vain. However, there was no shortage of promises for the 2024 Paris Olympics three years later.

Seon-woo Hwang (18, Seoul Chego), the ‘expectation’ of Korean swimming, took 7th place with a time of 1:45.26 in the men’s 200m freestyle final at the Tokyo 2020 Olympics held at the Aquatics Center in Tokyo, Japan on the 27th. It was the first time in 9 years since Park Tae-hwan (32), who won a silver medal at the 2012 London Olympics, in the 200m freestyle final, but unfortunately the medal was frustrated.

Hwang Seon-woo, who stood in lane 7, was a ‘new stealer’ at the beginning of the race. Hwang Seon-woo, who passed the 50m section the fastest among eight athletes in 23 seconds 95 seconds, also passed the 100m section in 49 seconds and 78 seconds. In 2009, when Paul Biedermann (Germany) set a new world record (1:42.0), when wearing a full-body swimsuit with less resistance to the current was allowed, the 50m (24.23) and 100m (50.12) sections were higher than the records. It was fast. The hall was buzzing with the unique race. But the second half was disappointing. Hwang Seon-woo was ranked first (1:16.56) all the way up to the 150m section, but it started to lag behind Biederman’s record (1:16.30). With 50 meters left to the touchpad, competitors started pouring out their reserves. 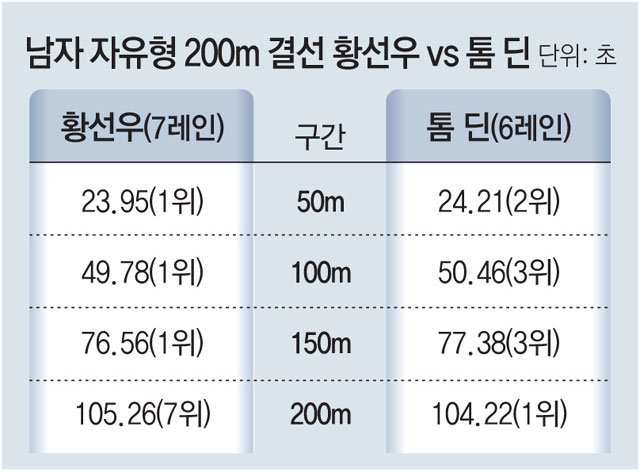 Hwang Seon-woo, who poured all his energy into the early stages of the race, could not show his back. In the end, he moved away from the podium with the height in front of him. The gold medal went to Tom Dean (1:44.22), the silver to Duncan Scott (1:44.26, England), and the bronze to Brazil’s Fernando Shefer (1:44.66). It was disappointing because if Hwang Seon-woo, the junior world record holder in this event, had a preliminary record (1:44.64), he could also win a bronze medal. After the match, Hwang Seon-woo said, “I thought of a race to be played from the beginning. Up to 150m there is no one next to me so I’m like ‘What? “After running the 100m, I felt a sense of fatigue that I didn’t feel during the preliminary rounds. After passing the 150m point, it was difficult. I realized the importance of managing my stamina and physical condition.” In the preliminary round on the 25th, he took first place in all sections with a strategy of striking from the beginning, and rewritten the Korean record set by Park Tae-hwan in 2010 (1:44.80) for the first time in 11 years.

After confirming that the record to the 100m point was 49.78 seconds, he asked the reporters, “Really?” and said, “It makes sense to be pushed from 150m.”

An NHK commentator who relayed the game said, “18-year-old Seon-woo Hwang ran a wonderful race in the first 100 meters in 49 seconds.” He added, “I really want to give a medal.”

In the freestyle 100m preliminaries held this afternoon, Hwang Seon-woo ranked 6th overall with a new Korean record of 47.97 and advanced to the semifinals, where 16 people compete. This is the second new Korean record in this competition, which he set in the preliminary round in November last year (48.25. ) broke itself.

Meanwhile, Kim Seo-young (27, Gyeongbuk Provincial Office), who entered the women’s 200m medley semifinal, shed tears of regret after failing to advance to the final by finishing 12th out of 16 with a time of 2:11.38.

Sports Committee, the Senate joins the OBEC to...

November 11, 2020
We use cookies on our website to give you the most relevant experience by remembering your preferences and repeat visits. By clicking “Accept All”, you consent to the use of ALL the cookies. However, you may visit "Cookie Settings" to provide a controlled consent.
Cookie SettingsAccept All
Manage consent