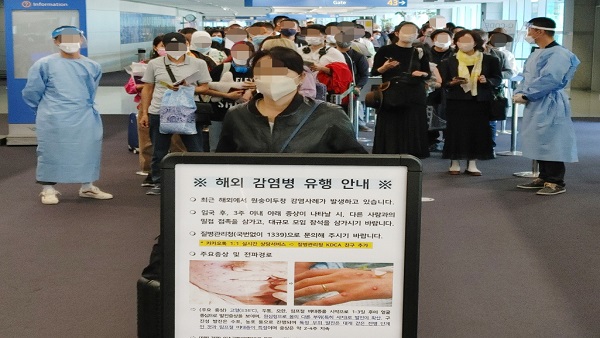 It was confirmed that the first suspected monkey pox patient in Korea appeared and quarantine authorities are conducting diagnostic tests.

The Korea Centers for Disease Control and Prevention (KCDC) announced yesterday (21st) that two suspected cases of monkey pox were reported and diagnostic tests are in progress.

The Korea Centers for Disease Control and Prevention did not explain the personal details of the two patients, but one of them was a Korean national who arrived through Incheon International Airport yesterday afternoon, and it is known that they were immediately quarantined at the Incheon Medical Center after showing suspicious symptoms during the quarantine stage at the airport.

Incheon Medical Center has been designated as an exclusive medical institution by Incheon City in preparation for the possibility of monkey pox entering Korea.

Earlier, on the 8th, the government designated monkeypox as a second-grade infectious disease and strengthened surveillance.

As for the second-grade infectious disease, 22 types, including Corona 19, tuberculosis, and chickenpox, have been designated as infectious diseases that require isolation in consideration of the possibility of transmission.

Monkey smallpox is characterized by a blistering rash on the face, palms, and soles of the feet after fever such as high fever.

It has been recognized as an endemic disease that mainly occurs in Africa.

However, after the first case of infection was reported in the UK on the 7th of last month, it quickly spread to Europe, North America and the Middle East, followed by the first suspected case in Korea.

It is being investigated that the initial symptoms do not come from fever as before, but in many cases where the rash starts in the mouth and anus and spreads to other areas.

However, unlike respiratory infectious diseases such as COVID-19, the transmission power is not high.

The Korea Centers for Disease Control and Prevention (KCDC) announced that it will hold a separate briefing to explain measures and other measures as soon as the diagnostic test results of two suspected monkey pox patients come out.