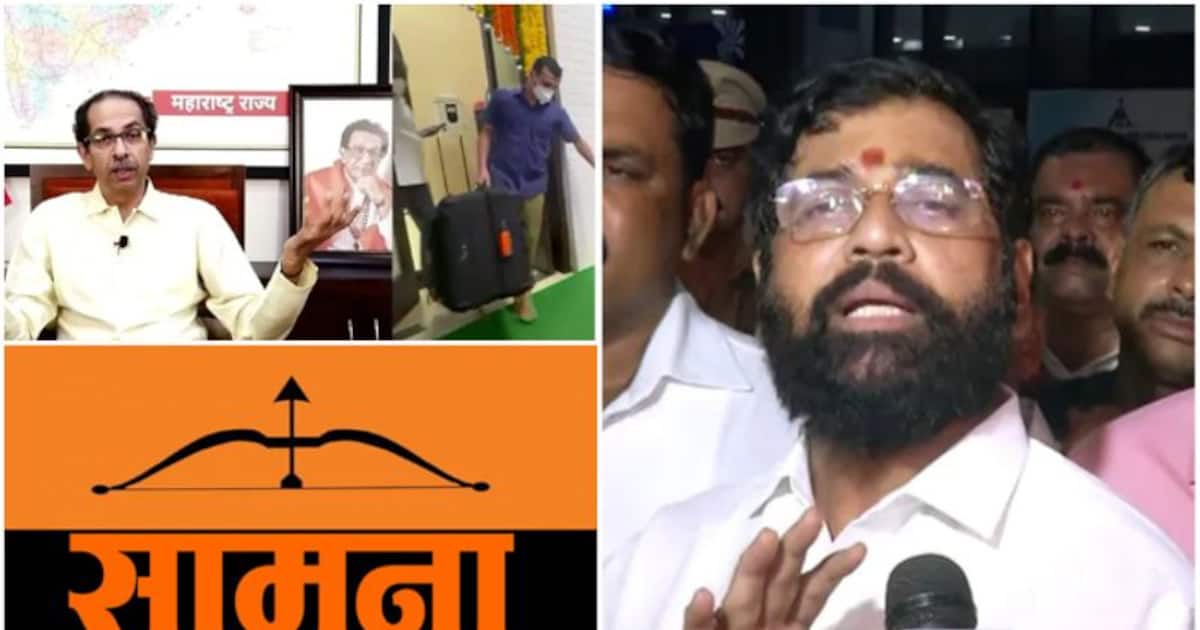 Guwahati / Mumbai: There are indications that Uddhav Thackeray’s pressure strategy to vacate the CM’s official residence ‘Varsha’ and move to his own ‘Matoshree’ did not work. Three Shiv Sena MLAs arrived at the camp of Eknath Shinde in Guwahati this morning. The MLAs arrived at the Radisson Blu Hotel in Guwahati with their families. Meanwhile, the Shiv Sena’s front page ‘Samna’ wrote an editorial criticizing Eknath Shinde. “Shinde is scared of the CBI and the ED,” he said. “Shinde,” said Samna.

At present, there are 33 MLAs in the Shinde camp (the Shiv Sena has a total of 55 MLAs). Shinde needs the support of four more MLAs to avoid the anti-defection law. Shinde is accompanied by five independent MLAs. But the Shiv Sena ruling party alleges that the current 17 Sena MLAs with Shinde are ready to return to Mumbai and have been detained without being sent back.

It should not be assumed that pressure tactics such as the emotional speech of ‘If a Shiv Sainik himself becomes the Chief Minister, he will resign’ and eviction are not working. Last night, Shiv Sena rebels had written a letter to the governor saying that Eknath Shinde had been elected as the leader of the assembly party.

Meanwhile, the Shiv Sena and the NCP have convened a series of meetings today to assess the situation. The meeting of Shiv Sena leaders will be held at 11 am at Matoshree. NCP president Sharad Pawar also called a meeting at the YB Chavan Center in Delhi at 11.30 am. The dissident MLAs will also meet at a hotel in Guwahati at 10 am.

Read Also  The rebels will be known as 'Shiv Sena Balasaheb'; Prohibition in Mumbai

Didn’t the police even know the plane was coming?

NCP president Sharad Pawar, who flew to Mumbai from Delhi to skip the opposition’s presidential nomination meeting from Delhi, is leading the consensus. Though Eknath Shinde has been made the Chief Minister, Sharad Pawar has asked the Shiv Sena to reach a consensus. The NCP is the second largest party in the Mahavikas Aghadi. Eknath Shinde, who is at the helm of the insurgency, alleged that the alliance with the Shiv Sena would only benefit the NCP and the Congress, and that the Shiv Sena was currently deviating from the Hindutva teachings of Bal Thackeray. Will Shinde adopt this consensus formula?

The NCP is the Home Minister of Maharashtra. Even then, Pawar was unhappy that the Mumbai police had not received any information that the MLAs were leaving the place. Police were not aware of the incident even when special planes arrived to take the MLAs first to Surat and later to Guwahati. Sharad Pawar considers this to be the fault of the department.

Uddhav said in a video statement yesterday that he would resign if all dissident MLAs in Guwahati, Assam, told him not to come before him and continue as chief minister. Uddhav is playing the last pressure tactic. There are indications that many opposition MLAs are not ready to resign from the Shiv Sena and merge with the BJP. Moreover, even with such a merger, there is no chance of anyone from the Shiv Sena, including Eknath Shinde, becoming the Chief Minister. Former BJP chief minister Devendra Fadnavis is likely to return to the post.

Read Also  'Those who deceived Balasahib are gone, now we will decide; It's Bigg Boss House'- Sanjay Raut | Warning to Rebel MLAs

Meanwhile, Shiv Sena spokesperson and senior leader Sanjay Rawat said there was no question of Uddhav resigning. Rawat said Mahavikas Aghadi would prove a majority if needed and Thackeray would not step down.

During the night, Uddhav returned to his home of the Thackeray family’s home ‘Matoshree’ in Bandra, where the Chief Minister’s official residence ‘Varsha’ was vacated. The move is also to inform the rebels that he will not hesitate to resign. If the rebels in Guwahati do not return, the government will lose a simple majority. Eknath Shinde claims that two-thirds of the Shiv Sena MLAs are with him. This means that the Shinde camp will be able to stand with the BJP without falling prey to the current anti-corruption law. If they do not give in to the Shiv Sena leadership, they may join hands with the BJP to bring in a no-confidence motion.

Earlier in the day, there were indications that Uddhav’s residence would be vacated. Senior Shiv Sena MLAs Neelam Gorhe and Chandrakant Khaire were in ‘Varsha’ when Uddhav left the residence. Uddhav was staying with his sons Aditya Thackeray, Tejas Thackeray and his wife Reshmi Thackeray. Earlier, footage emerged of him and his family carrying all their belongings in a box. His son Aditya Thackeray has removed his “ministerial” status from his Twitter bio.

Read Also  "The limit of medical capacity is imminent," he said... The only way to strengthen quarantine is to ban movie theater popcorn

Even when he was the chief minister, Uddhav did not move to his official residence. He moved to Varsha in 2021 when some repairs were done on Matoshree.

Shinde claims to have 34 MLAs with him. The picture with these MLAs also came out of the Eknath Shinde camp. Shinde is accompanied by 32 Shiv Sena MLAs and two Prahar Janashakti MLAs. At present, the Shiv Sena has 55 MLAs in the Assembly.

The total number of seats in the Assembly is 288. The absolute majority needs the support of 145 members. At present Mahavikas Aghadi has 169 members. The Shiv Sena has 56 seats, the NCP 53 and the Congress four. The government has the support of 16 people, including smaller parties and independents. One of the Shiv Sena MLAs, Ramesh Latke, was killed in the incident. Two NCP ministers, Nawab Malik and Anil Deshmukh, are in jail. The two were arrested in connection with a money laundering case. Thus, the ruling party currently has 166 members in the ruling party.

The NDA has 113 members in the assembly. The BJP has 106 MLAs. The NDA also has the support of seven people, including independents from smaller parties.

The Election Commission has published 400 members of the constituency MPs across the country to support the 66 elections.
Posted onJune 27, 2022June 27, 2022
Menu