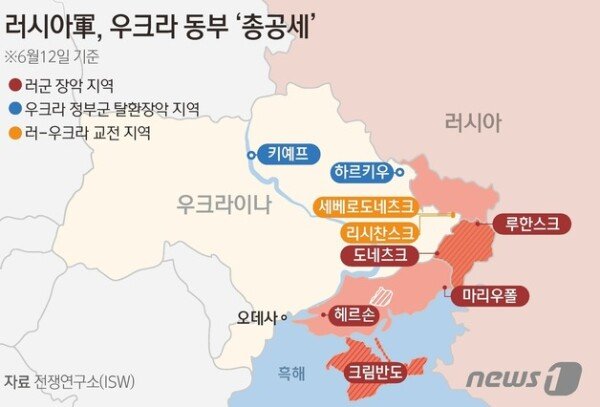 It has been four months since Russia’s invasion of Ukraine began, but there is hardly any sign of an end to the war. As the war continues and the Russian army is concentrating its firepower on eastern Ukraine, residents of the region are risking their lives to escape.

Russia has been fighting for weeks to take over Severodonetsk and Lisichansk, which Russia has not yet taken over in the Donbas region, and a mass evacuation of residents from the region is expected on the 20th (local time), Reuters reported.

Lilia, 22, a mother of a one-year-old who was sitting at the Donetsk Pokrovsk train station in the Donbass region, said, “There is no electricity, no water, no gas, nothing. How can we live here? The bombardment had turned so frightening, and we decided to leave,” she said.

According to the United Nations High Commissioner for Refugees (UNHCR), since Russia invaded Ukraine on February 24, there have been 8 million internal refugees in Ukraine, and 6 million have left Ukraine to other countries.

Some refugees within Ukraine have managed to return home after Russia re-targeted the capital Kiiu to the Donbas region, but a growing number of residents are determined to flee.

Victoria, 36, who lives in the Donetsk region, said: “I have three children, but there is no aid during the war. I decided that the only way to survive was to rely on humanitarian aid. We plan to leave together,” he told Reuters.

Residents of the city of Bakhmut, 55 kilometers southwest of Severodonetsk, where fierce fighting is taking place, are enduring continuous Russian artillery fire. Police and volunteers evacuated residents after the Russian bombardment.

Read Also  Are you interested only in Shanghai? Changchun, whose lockdown will soon be a month away, "Look at us too"

Mark Poppert, a volunteer from the British charity RefugEase, works as a guide to refugees at Pokrovsk Station. “Our mission is to move people from the front lines to safe areas,” he said.

Luba, 57, a resident near Bakhmut, who recently decided to escape, said in an interview with Reuters, “We have decided to leave to save the lives of ourselves, our children and relatives.”

However, some of the residents who decided to escape are still stranded due to destruction of bridges and roads and lack of resources. UHNCR estimates that about 13 million Ukrainians are unable to leave the affected area.

Luhansk Governor Serhi Haidai said evacuation of civilians was taking place amid Russian shelling from Lisichansk across the Severodonetsk River. did.

Meanwhile, Russia and Ukraine took diametrically opposed positions on the situation at the battle of Severodonetsk, the front line in the eastern Donbas region.

The Ukrainian Army said on Facebook the day before, “Our unit repelled an attack by Russian forces in the Toskivka region south of Lisichansk.”

Meanwhile, Russian Defense Ministry spokeswoman Igor Konashenkov said in a video statement that “the offensive in the direction of Severodonetsk is developing successfully” and that the town of Maitolkine, located on the eastern outskirts of the city, has been captured.