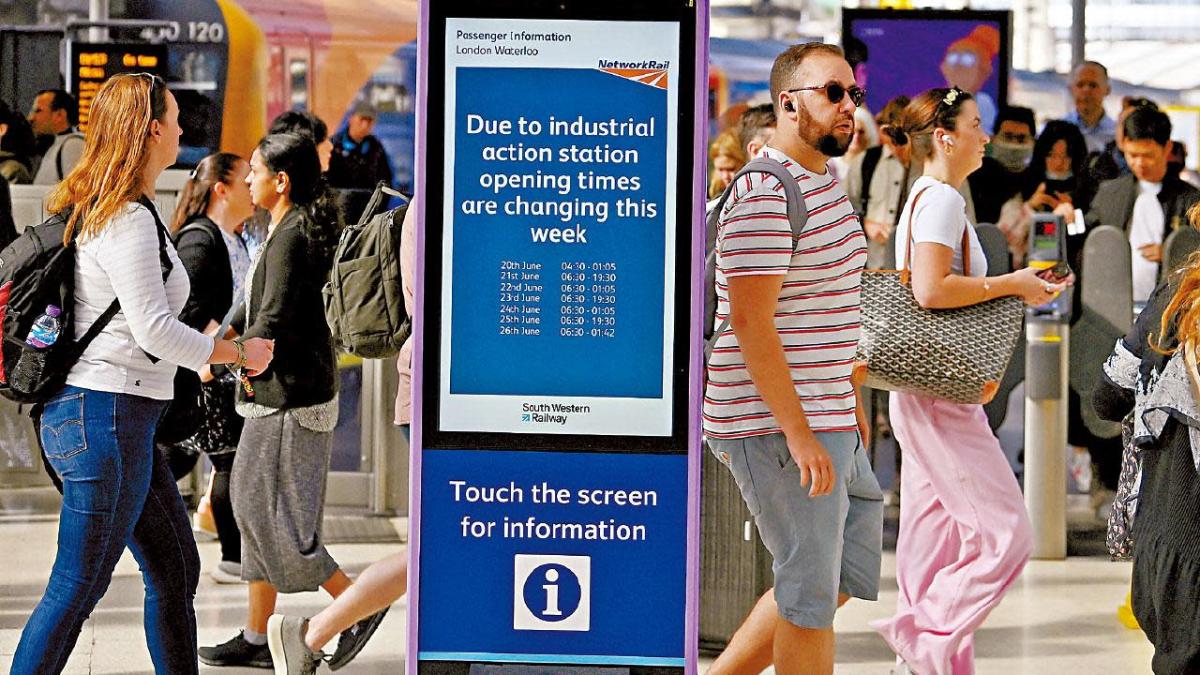 The United Kingdom is facing the largest railway strike in 30 years. More than 50,000 railway personnel will strike intermittently from Tuesday local time, protesting that the salary increase cannot keep up with high inflation and the reduction of manpower. It is expected that nearly 80% of train services will be affected. Affected, rush hours at work may lead to chaos. Unions have warned the strike will escalate and could last until Christmas.

The BBC reported that 40,000 rail workers will strike on Tuesday, Thursday and Saturday, while 10,000 London Underground workers will strike on Tuesday. Almost all routes in England, Scotland and Wales will be affected, with 20,000 trains a day across the country, which will be reduced to about 4,500 by then. Train services on non-strike days are also expected to be affected by reduced manpower.

Participating in the strike included car captains, maintenance and signalling staff, as well as employees in charge of security and catering services. RMT, the union that launched the strike, said local retail price index (RPI) inflation had reached 7.1 per cent when it negotiated with state-run Network Rail in December, but the company’s proposed pay rise was “well below that.” “. The British “Daily Telegraph” said the company proposed an initial salary increase of 2%, and another 1% increase depending on the operating situation; and analysis expected that the British inflation will deteriorate to 11% this autumn.

In addition, the company plans to cut 2,500 maintenance staff to help achieve a cost saving target of 2 billion pounds in the next two years, which has been criticized by RMT for affecting train safety. The union also said that the government’s cut of around £4 billion in funding to the transport system was the “source” of the labour dispute.

While workers at other rail companies, such as ScotRail in Scotland, did not strike, they rely on the “rail network” for signalling and track maintenance services, so 90% of trains had to be cancelled during the RMT strike.

Authorities called on the public to reduce travel and suggested that people use bicycles to go to work. It is concerning that a number of large-scale events, including music festivals and cricket matches, as well as final exams for high school students, will be held during the railway strike.

Transport Secretary Grant Shapps called the rail strike “unnecessary” and accused unions of “punishing millions of innocent people”. The opposition Labour Party accused the Conservative government of refusing to negotiate with railway companies and workers, deliberately “pouring petrol on the fire” to distract attention and ease the recent pressure on the ruling party.

The original article was published on AM730 https://www.am730.com.hk/International/The largest scale in 30 years-80% of the trains cancelled-British railway strikes today-/324904

The caravan turns into a camper! Hyundai Staria roof tent and shower are one of the equipment – Liberty E-Newsletter Auto Channel
Posted onJune 26, 2022June 26, 2022