Top Posts
“Varit” reveals Japanese investors are interested in Thai...
“Natthawut” brought “Carmob” red shirts from Ratchaprasong to...
Be like Tokyo… Ahead of the Winter Five...
Sadly, 16-year-old Ajax youngster has died in a...
Beautiful from a young age! Natasha changed the...
Shinsegae Centum Chanel store group confirmed, contacted through...
‘Smart Factory Department’, ‘Future Automobile Department’… In the...
US court confiscates Singaporean-owned tanker for violating sanctions...
Samut Sakhon is heavy! 1,265 new patients ‘Governor...
Brazil – Mexico, Spain – Japan in the...
Home World A 90-year-old American actor fainted in the heat at an outdoor event on the Hollywood Walk of Fame
World

A 90-year-old actor who attended a Hollywood outdoor event once fainted due to the heat.

According to CNN on the 21st (local time), actress Marla Gibbs, who is regarded as an American comedy legend, suddenly lost consciousness while ascending to the podium as the main character at the Hollywood Walk of Fame induction ceremony held in Los Angeles (LA) on the 20th.

At that time, Gibbs gave a speech with a smile as he thanked him for entering the ‘Walk of Fame’, but suddenly stopped talking and closed his eyes. Then, his body leaned sideways helplessly.

As Gibbs was on the verge of collapsing to the floor, his son jumped up to the podium and supported him, while his daughter shouted, “Mother needs time to calm down.”

The day, when the temperature exceeded 32 degrees, was suspended until Gibbs regained consciousness.

Back on stage, Gibbs said he must have lost consciousness from the heat and excitement. 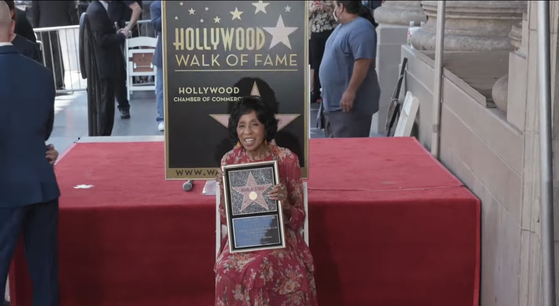 Hollywood’s ‘Walk of Fame’ is a famous landmark in LA where the names of stars who have made achievements in movies, dramas, and pop music are engraved on a star-shaped marble floor.

Open the timeline of a 7-year-old child, the 11th patient in Korat, found infected by a mother in Pathum Thani.

‘I refused the marriage proposal’… Daughter of Pakistani...

Shura Council Election: Voters can be added to...

The Nanjing epidemic is thrown away, the Russian...

“Support for vaccine IPR exemption”… ‘In the...

December 26, 2020
We use cookies on our website to give you the most relevant experience by remembering your preferences and repeat visits. By clicking “Accept All”, you consent to the use of ALL the cookies. However, you may visit "Cookie Settings" to provide a controlled consent.
Cookie SettingsAccept All
Manage consent