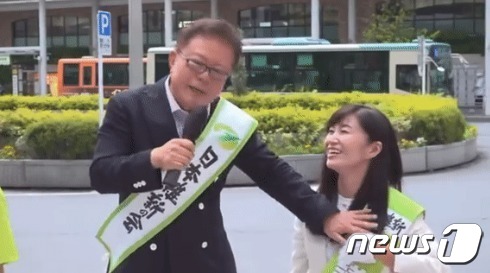 A male politician in Japan has been embroiled in a sexual harassment controversy after he tapped a female politician on the shoulder or near the chest during a street speech.

On this day, next to Inose’s former governor, Ebisawa Yuki (48), a prospective candidate for the constituency district, was introduced. Former Governor Inose tapped and patted Ebisawa several times on the shoulder after making the mistake of calling Ebisawa by his first name.

Then, suddenly, after stroking Ebisawa’s chest, he was caught putting his hand on his shoulder again.

The scene in question spread through social media after being uploaded to YouTube, and local netizens criticized former Governor Inose, saying it was “sexual harassment.”

As the controversy grew, former Governor Inose apologized through his Twitter. He said, “I was pointed out that I should be careful about touching my body, such as putting my hand on the shoulder, when introducing a colleague, especially when the other person is of the opposite sex. bowed down

However, after that, former governor Inose showed a tweet from a netizen who shared a tweet saying, “I saw this video, but I accidentally called the name and touched the other person. People who want to create controversy about anything are scary.”

On the other hand, Ebisawa, the victim, said, “The video of Inose touching me during a street campaign became a hot topic.

He continued, “There were rumors that it felt like they hit me on the shoulder, but I don’t care at all,” he emphasized.

He added, “I received a polite (apology) from Mr. Inose. I was rather surprised that it became a topic even though I didn’t even touch it.”

Even after this incident, the two are still campaigning together on the street, but the reaction from netizens is still negative.

One netizen commented, “In the first place, you don’t need to touch your body in a street speech. Such behavior is considered sexual harassment by the company, but is it okay in the political world?” and “I know that a member of the National Assembly is the one who makes the law? Because they want to win the election, they are desperate “If you don’t say no, it will have a negative impact on society,” he pointed out.

Another netizen commented, “Just because you don’t care about Mr. Inose’s sexual harassment doesn’t mean there’s nothing wrong with it.” “It’s abnormal to touch another person’s body. Because you didn’t sue (Former Governor Inose) ) is safe,” he said. “This interferes with the prevention of sexual harassment and harassment. You must not do this kind of behavior. If you want to become a politician, you must have this awareness more.”