“A few hours to draw cash” lined up with emergency food, Myanmar chaos

Amid the military coup in February, Myanmar fell into extreme political turmoil, and the local economic situation is also deteriorating.

The soldiers’ salary is also postponed… Some join the looting

In particular, the Financial Times (FT) of the UK reported on the 31st that a shortage of cash has occurred and long lines are lined up in front of banks from dawn.

According to this, Myanmar people are standing in line with plastic chairs, mats to lean on, and umbrellas to retrieve money from banks. As the day got warmer, water, emergency food, and portable fans also appeared as necessities for’lined-in at the bank’. Kyodo News Agency said, “You have to wait at least a few hours to get one cash out.”

It is due to the unstable political situation that depositors started to withdraw cash like this. Nicky, 19, a writer and medical volunteer living in Yangon, said, “I can’t believe it because the military regime doesn’t show us trust,” he said. “That’s why we have to get the money back.” He is drawing cash on a daily basis, keeping the withdrawal limit of 200,000 kyat per day (about 160,000 won) from the family account of KBZ, the largest bank in Myanmar.

According to sources in the financial industry, those who manage to withdraw money from their accounts either exchange them for dollars on the black market or hide them in their homes. FT reported that “we are exchanging the kyat for gold or dollar, so both gold and dollar have seen record-breaking increases in prices since the coup.”

After the coup, the Myanmar currency, Kyat, fell 20% in value against the dollar. 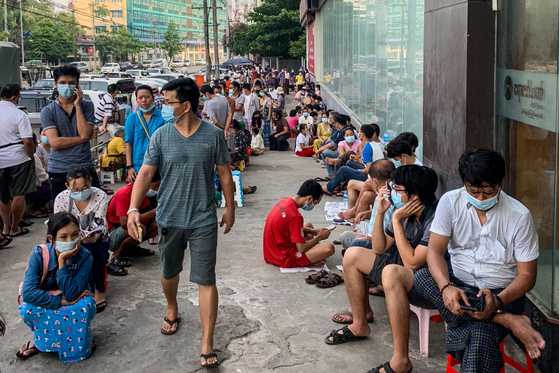 People waiting in a long line before banking in Yangon, Myanmar on April 12, waiting for cash withdrawals[AFP=연합뉴스]

The problem aggravated as Myanmar’s central bank did not provide enough cash to commercial banks during this’withdrawal rush’. FT said, “A German company that supplied raw materials and parts for the production of banknotes in Myanmar ceased operations at the end of March.” 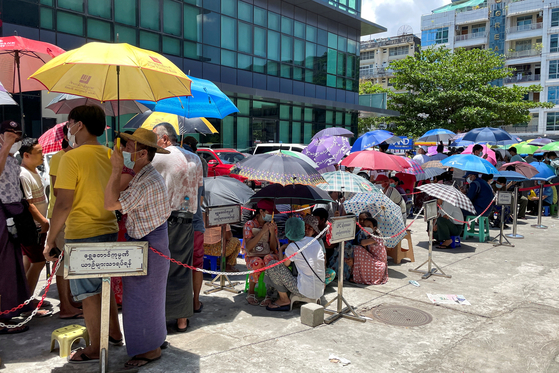 Those waiting for cash withdrawal in Yangon on May 13th. I can see a lot of people wearing parasols. [로이터=연합뉴스]

An official from a clothing company told Kyodo News that they are having difficulty in paying employees due to lack of cash. According to local media in Myanmar, the Myanmar military authorities, which ran out of cash, were unable to pay their soldiers on time, and some soldiers took part in looting. 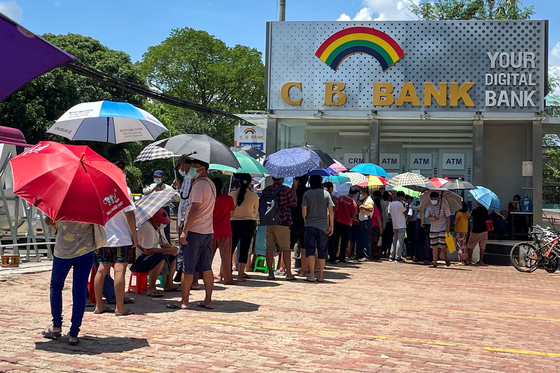 Myanmar’s military is arguing that the bank is operating normally. However, FT reported that the lack of real money was continuing due to the lack of public confidence in the military’s ability to manage the economy. 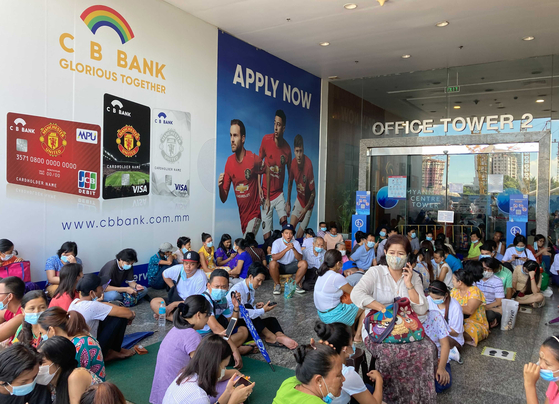 In addition, the prices are tumultuous. According to Kyodo News, the price of gasoline and other fuels as well as medicines that depend on imports have risen. Matsuura Hiromasa Mizuho, ​​chief economist, said, “After the coup, there will be a disruption in logistics and the overall price of goods in Myanmar will have risen by more than 10-15%.”

One diplomatic source told Kyodo News, “The Myanmar military may instruct the central bank to increase its funding, but there is a precedent that inflation triggered large-scale anti-government protests in Myanmar in the past.” There is” he said.

◇ International news made with readers

Health Network” The number of diagnoses dropped after...

The 9/11 tragedy could have been prevented… Woman’s...

It was a Myanmar, Rohingya massacre that...

Dr. Theera pointed out that he should...

October 25, 2020
We use cookies on our website to give you the most relevant experience by remembering your preferences and repeat visits. By clicking “Accept All”, you consent to the use of ALL the cookies. However, you may visit "Cookie Settings" to provide a controlled consent.
Cookie SettingsAccept All
Manage consent