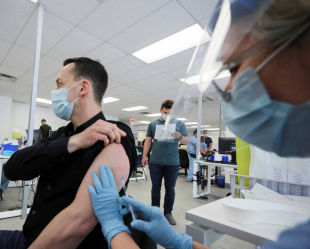 Professor Kim Woo-joo of Korea University Guro Hospital said, “Since smallpox is a deoxyribonucleic acid (DNA) virus, the possibility of mutation is relatively low, and it is not a zoonotic disease, so it was possible to eradicate it in 1980. It is expected that the protective effect will continue for a long time close to the level of immunity,” he said.

Some people know that the smallpox vaccine is a so-called ‘non-injection’, but the injection that caused a huge wound to the shoulder blade as a child is the Tuberculosis Prevention Vaccine (BCG). BCG still recommends vaccination in newborns under 4 weeks of age. The smallpox vaccine is given by using a special, bifurcated needle with multiple stings.

On the other hand, it is known that there are 35.02 million smallpox vaccines in stockpile in Korea. This is because the government has purchased large quantities of vaccines in preparation for ‘bioterrorism’. However, the smallpox vaccine is difficult to inoculate on a large scale due to the complicated method of vaccination and the high risk of infection during vaccination. Article 40 of the Infectious Disease Prevention Act stipulates that medicines and equipment can be stockpiled in case of bioterrorism infectious diseases. There are eight types of bioterrorism infectious diseases, including smallpox, anthrax, plague, and Ebola fever.

The health authorities said, “It is reported that the smallpox vaccine is cross-immune and is effective in preventing about 85% of monkey smallpox. “he said.

Experts suggested that high-risk group vaccination should be considered during an epidemic, even though the contagiousness of monkeypox is not strong enough to require a large-scale vaccination.

Choi Won-seok, a professor of infectious disease at Korea University Ansan Hospital, said, “According to the results of overseas studies, the smallpox vaccine is more than 80% effective against monkeypox. He added, “Assuming the domestic epidemic situation, vaccination within the high-risk group or within the range where there is a possibility of transmission may be considered.”

Professor Eom Joong-shik of the Department of Infectious Diseases at Gachon University College of Medicine said, “The smallpox vaccine is not easy to be vaccinated because it is a branch-guided vaccine that scrapes or pricks the skin 10 to 20 times, rather than an intramuscular injection like influenza or corona vaccines. He said, “If the domestic epidemic is expected to increase, it will have to start with the high-risk group,” he said.