A sniper on the Galaxy Fold 3?… KT 100 Mega Exposure YouTuber “I will review my money honestly”

IT YouTuber ‘Issub’ with 1.83 million subscribers has announced that it will discard the review video of ‘Galaxy Z Fold 3’ recently released by Samsung Electronics and upload an honest review of ‘My Money’. Attention is focused on the background of discarding the already produced video.

Issub said on his Facebook on the 12th, “I came to tell you that I think you will be waiting for my Galaxy Z Fold 3 video a lot. I couldn’t show it.”

He added, “Once this has happened, I will try to make an honest review by purchasing it myself rather than renting it or sponsoring it.”

This is different from the post posted on Facebook by Issub on the 11th. At the time, Issub posted a picture of the Galaxy Z Fold 3 on Facebook and showed extraordinary anticipation, saying, “Is it time to switch from iPhone 12 to Galaxy after 6 months?” 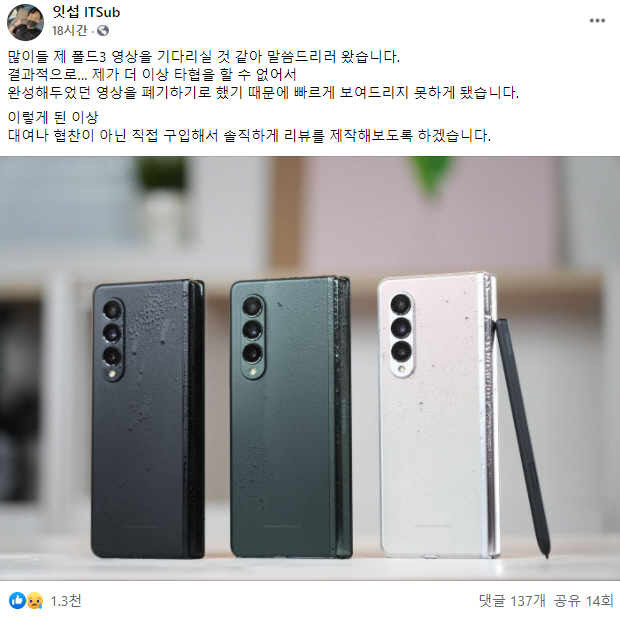 A month ago, on his YouTube channel, ‘Galaxy Z Fold 3 & Galaxy Z Flip 3 design leaked? He also uploaded a video titled ‘The reason why we are particularly excited about this new Samsung product’.

When the news that Isseop destroyed the Galaxy Z Flip 3 review video came out, netizens responded, “We want an honest review rather than sponsorship”, “We support Issub’s judgment” “How serious is it?” “Are there so many shortcomings?” and so on followed.

On the other hand, Isseop raised the ‘internet speed drop controversy’ to the surface in April, claiming that KT’s 10 gigabit internet service only has an actual speed of 100 Mbps. Due to the controversy sparked by the video, KT was fined 500 million won by the government.

Horror adventure ‘The Medium’, officially released in Korean on September 3

Transport unveils a new project plan for the...