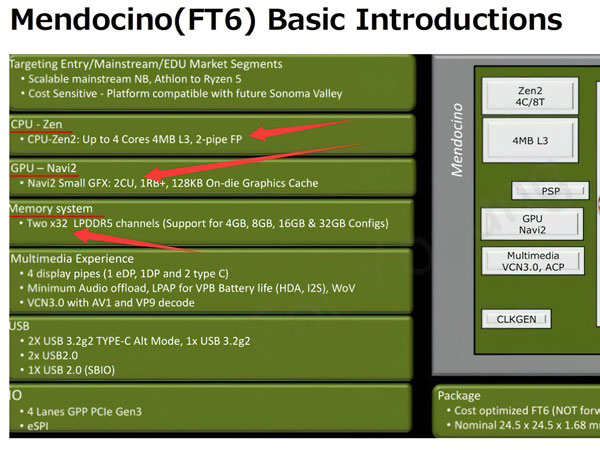 The maximum GPU of AMD Mendocino APU is in the atmosphere of being confirmed with the same 2CU configuration as leaked earlier.

According to the introductory image of AMD Mendocino that was posted on the WeChat group and now down, the GPU is a 2CU configuration based on the RDNA2 architecture. This is composed of the same Zen2 architecture CPU and RDNA2 architecture-based GPU, which is 1/4 of the codename Van Gogh APU used in the Steam deck.

Previously, it was known that the specification used for a handheld game console with a concept similar to the Steam deck was leaked, and it was known that the Mendocino 2CU configuration GPU would be integrated, but it was estimated as one of several Mendocino models. Considering that the maximum specifications are usually indicated in the structure diagram, if this leaked data is actual AMD internal data, the iGPU installed in Mendocino is a maximum of 2CU configuration.

As Mendocino was originally released for the purpose of being used in low-end Chromebooks for the educational market, it is expected that the iGPU performance is not significant, but it is a little disappointing that it is the lowest specification CU configuration based on the RDNA2 architecture.