Government Gazette website On July 18, 2021, the regulations issued under Article 9 of the Royal Decree on Public Administration in Emergency Situations (No. 28), signed by General Prayut Chan-ocha Prime Minister, saying that when assessing the situation after the entry into force of the Regulations (No. 27) dated July 10, 2021, it appears that the rate of increase in the number of infections cannot be slowed down. and the number of patients who need to be monitored for symptoms, especially in the elderly at risk chronic disease patients and groups of patients with respiratory disease in Bangkok, its vicinity, and many provinces that are growing rapidly and tend to continue This is often a family and community infection, and therefore more intensive measures and enforcement are needed. from the previously announced terms to expedite rectification and alleviate the emergency situation as quickly as possible

The said requirements are important.

Article 1 Reduces people’s departure from their homes that cause the risk of spreading COVID-19. in Bangkok and surrounding provinces and provinces designated as the highest and strict control areas due to the increased number of infected people And most of them are infected with delta strains that spread rapidly and severely affect life and health. especially at risk groups, both the elderly and those with chronic diseases.

“Even though there has been an accelerated vaccination for group immunity, But it will take time to build immunity that may not happen quickly. What must be done together at this time? is to slow down the epidemic rate of severe disease by stopping any action that poses a risk or causes the disease to spread.”

Article 3 Reduce and limit the movement of travel Encourage people in highly controlled and strict areas to avoid limiting or refraining from missions that require unnecessary departure from their homes or residences.

Article 5 Competent officials with support from the Security Emergency Situation Action Center Ministry of Interior Bangkok and related agencies to set up checkpoints, checkpoints, or intercepting points in the transportation route issued under the highest and strict control area

Clause 6 All types of public transport between provinces throughout the Kingdom shall be in accordance with the guidelines prescribed by Prof. B.E.C. determines by limiting the number of passengers using the service to no more than 50 percent of the passenger capacity for each type of vehicle as well as to arrange for social distancing and strictly follow the public health measures prescribed by the government

(1) food distribution or drink Restaurants selling food or beverages To operate until 8 pm. Consumption in the shop is prohibited and can only be taken back for consumption elsewhere.

(2) Department stores, shopping centers, community malls or other establishments with similar characteristics To be open for service only in the supermarket department. Medicine and supplies department Areas that provide vaccination services or other government medical and public health services to open until 8:00 p.m.

(3) The hotel is allowed to operate normally. by suspending meeting activities seminar or banquet

Article 8 Prohibition of organizing activities in groups of more than 5 people.

In addition, the Government Gazette also published Coronavirus Disease 2019 (COVID-19) Situation Management Center Order No. 10/2564 Re: The designated situation area is the highest and strict control area. maximum control area control area and high surveillance area According to the requirements issued under Article 9 of the Royal Decree on Public Administration in Emergencies B.E. 2548 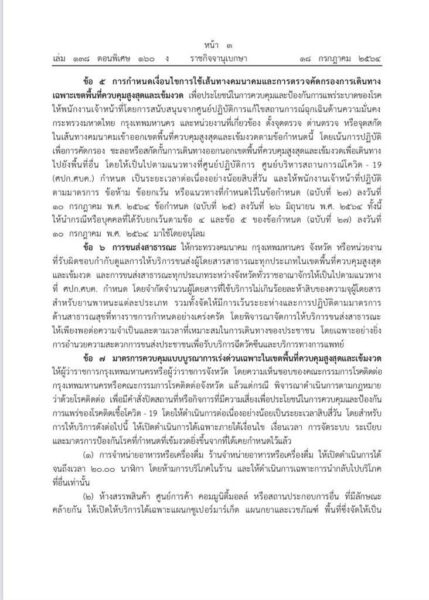 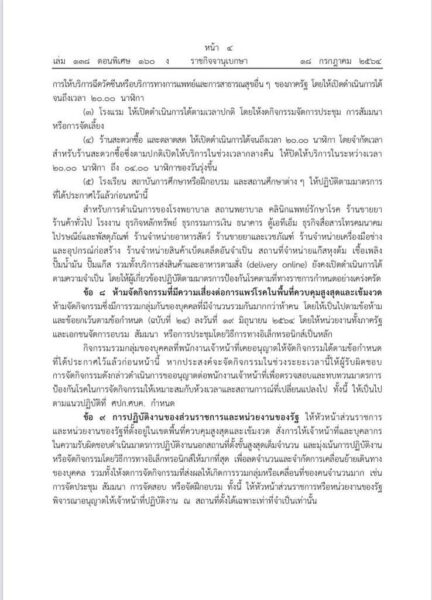 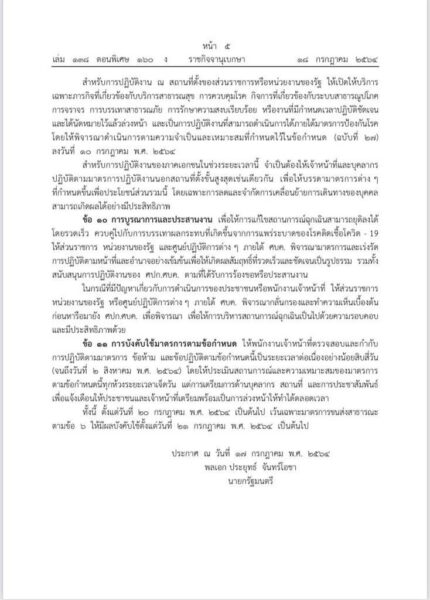 Ministry of Land, Infrastructure and Transport to crack down on insider real estate speculation… Mandatory property registration for all employees

During the Mid-Autumn Festival holiday, Beijing focuses on...

An online seller complained that the police raided...

Praising the great achievements of the Chinese...

May 10, 2021
We use cookies on our website to give you the most relevant experience by remembering your preferences and repeat visits. By clicking “Accept All”, you consent to the use of ALL the cookies. However, you may visit "Cookie Settings" to provide a controlled consent.
Cookie SettingsAccept All
Manage consent