Apartment supply shortage is severe, but the pre-sale price limit is holding back supply.

Recently, in the apartment sales market, a tug-of-war between the government who wants to lower the sales price and the business operator who wants to be highly rated is continuing. As a result of this, it is pointed out that the shortage of apartment supply in Seoul is intensifying as new sales are delayed.

A representative example is the redevelopment project in the Sewoon 3-1·4·5 districts in Jung-gu, Seoul (Hillstate Sewoon Central). A year ago, the project implementer requested a pre-sale price review from the local governments of Seoul and Jung-gu with the aim of pre-sale of 535 apartment units in July. However, the conflict is growing as the Korea Real Estate Agency, an agency under the Ministry of Land, Infrastructure and Transport, rejected the evaluation of housing land costs by appraisers designated by the two local governments twice in March and May this year.

When a new apartment is sold in sales, the sales price is calculated to add the appropriate profit of the construction company to the land and construction costs, and then sold at a price below that price. The real estate agent is in charge of judging the appropriateness of calculating the cost of housing in the process of evaluating the sale price. Although local governments are responsible for approving pre-sale prices, the local government cannot approve pre-sale prices if it is withheld during the process of reviewing the adequacy of the housing site cost. The developer is claiming that the real estate agent is delaying the project by lowering the cost of housing without any special explanation.

Developer “No matter how low the sale price, the government is trying to lower it”

While promoting the general sale of apartments in 2019, the developer was presented with a guarantee amount of 27.5 million won per 3.3㎡ (pyeong) from the Housing and Urban Guarantee Corporation (HUG). Park Rae-young, CEO of Hanho E&C, said, “The pre-sale guarantee amount calculated by HUG takes into account the pre-sale price in the surrounding area, but in the case of the Sewoon district business site, it was decided at the level of the average sale price in Seoul because no new apartments were available for more than 10 years.” It was too low to give up the HUG guarantee and applied for the installment system, but the real estate agent is making a judgment with the lower pre-sale price than HUG in mind.”

Regarding this, a representative of the Real Estate Agency said, “I only presented the opinion that the evaluation of housing land cost is not reasonable according to the’Rules on the Calculation of Apartment Sales Price, etc.’ to this workplace.” I do not have the authority to make decisions,” he refuted. 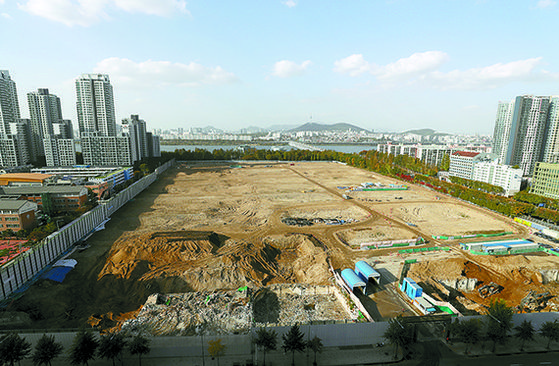 The site of the 3rd Sinbanpo/Gyeongnam Apartment Reconstruction Complex (Raemian One Bailey), Banpo-dong, Seocho-gu, Seoul. It is a complex that is evaluated as a so-called lottery subscription. yunhap news

The implementation company suspects that the government is conscious of the criticism and intentionally attempts to lower the sale price as the case of Raemian Won Bailey (Shinbanpo 3rd, Gyeongnam reconstruction) in Seocho-gu became controversial. Raemian One Bailey, in 2019, offered a guarantee of 49 million won per 3.3 sqm by HUG, but refused to do so and opted for the installment system, which increased by 7 million won from Seocho-gu Office in February of this year to 56.6 million won per 3.3 sq.m. The sale price was approved. When it was pointed out at the National Assembly in February that the pre-sale price of Raemian Won Bailey was high, then the Minister of Land, Infrastructure and Transport Byun Chang-heum said, “Because the land price was assessed as the appraised price in the parting system, the pre-sale price was set high.” I am sorry. I will come up with a plan to improve the system.”

CEO Park said, “Raemian One Bailey’s evaluation of housing land cost is 2.1 times the official land price, but Sewoon District is 1.5 to 1.6 times,” he said. “As the business is delayed, financial costs of billions of billions are incurred in one month.” .

The divisional system revived last year with the aim of reducing the burden of end-users with a reasonable pre-sale price. However, there was a side effect that the sale price of apartments subject to regulation was lower than the surrounding market price by more than hundreds of millions of won. According to Real Estate 114 and Jikbang, the competition rate for subscription in Seoul over the past year (May 2020 to April this year) recorded 94.1 to 1. The competition rate for the first year (May 2017-April 2018) since the inauguration of President Moon Jae-in was 15.1 to 1, which is 6 times higher than that. Lee Chang-moo, a professor at Hanyang University’s Department of Urban Engineering, said, “As the market price and the disparity from the surrounding market are increasing, the so-called’lotto sale’ is mass-producing. It was diagnosed.

As the pre-sale price fell, the burden on business operators also increased. Due to deteriorating business feasibility, more and more businesses are turning to unregulated officetels and urban living houses instead of apartments. In fact, there is a case in which other business sites in the Sewoon District turned to the supply of urban living housing due to the lack of business feasibility even after obtaining approval for apartment business. On the contrary, the supply of apartments that end users want is inevitably reduced.

Other complexes in the Bunsangje area, which are about to be sold, are in a similar situation. Dunchun Jugong, one of the largest reconstruction sites, has initially pursued the project with the aim of moving in in August 2023. However, the business was delayed as the union rebelled against the HUG presented two years ago. Although the association’s executive department was dismissed due to the sale price problem, the general sale price problem was not resolved. Considering the application of the split-off system, the prevailing outlook is that pre-sale within this year is difficult because the union will not receive the desired price. The general pre-sale quantity of this workplace is 4,786 households, so if pre-sale is carried out as scheduled, the problem of shortage of housing supply in Seoul can be partially solved.

Prof. Chang-moo Lee said, “The business proceeds smoothly only if the supplier can obtain adequate profits, but the division system prevents this, resulting in a delay in the supply of new homes.” It is reasonable to decide the sale price,” he stressed.

The keywords for the first and second new...

Lotus closes its distribution center for 7...

October 19, 2020
We use cookies on our website to give you the most relevant experience by remembering your preferences and repeat visits. By clicking “Accept All”, you consent to the use of ALL the cookies. However, you may visit "Cookie Settings" to provide a controlled consent.
Cookie SettingsAccept All
Manage consent