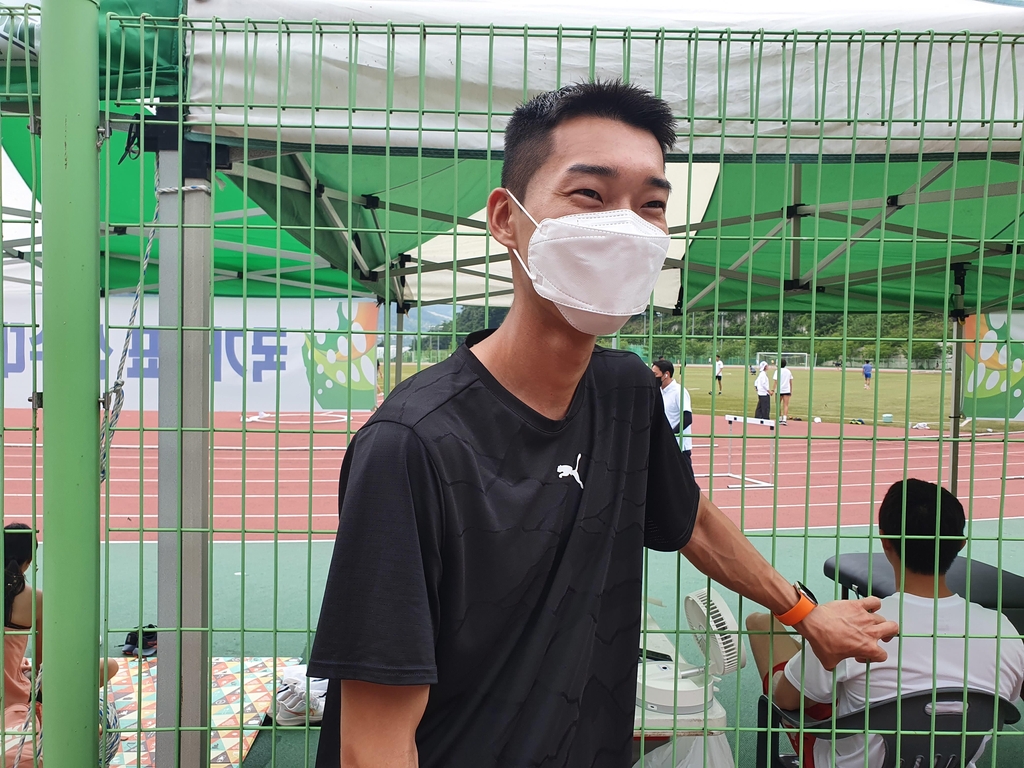 In addition, he hoped, “I hope that the two of us will win a gold medal together at the 2024 Paris Olympics.”

On the 23rd, during the 76th National Athletics Championships, Woo Sang-hyuk met with Yonhap News at Jeongseon Sports Complex in Gangwon-do and raised his thumb, saying, “I saw Hwang Seon-woo’s realm. It was really great and wonderful.”

In the men’s high jump final at the Tokyo Olympics held last year, Woo Sang-hyuk set a new Korean record of 2m35 and placed 4th, the highest in Korean track and field history.

As a Korean management athlete, he reached the Olympic final for the first time in nine years since Park Tae-hwan, placing 5th in the 100m freestyle and 7th in the 200m.

Korean fans welcomed the appearance of world-class athletes in track and field and swimming.

The two received as much applause as the Tokyo Olympic medalists.

Also, the growth did not stop.

Woo Sang-hyuk broke the Korean record by jumping 2m36 at the Czech indoor competition in February this year, and won the 2m34 jump at the Belgrade World Indoor Championships on March 20th.

Woo Sang-hyeok took first place by jumping 2m33 in the opening match of the World Athletics Federation Diamond League (outdoor event) on May 14, when both Mutaz Essa Basim (Qatar) and Jean Marco Tamberry (Italy) participated in the Tokyo Olympics joint 1st place. It is also the first time in Korea to win the Diamond League.

Hwang Seon-woo also tasted the joy of his first major championship victory with a record of 1:41.60 in the 200m freestyle at the 2021 Short Course (25m) World Championships held in Abu Dhabi, UAE in December last year.

Here, she won a silver medal at the Long Course World Championships, a bigger stage.

Woo Sang-hyuk is a strong contender for the men’s high jump at the World (outdoor) Athletics Championships, which will open on July 15th in Eugene, Oregon, USA.

In the match held in Moscow, Russia on the 7th, Ivanuk surpassed 2m34 and broke Woo Sang-hyeok’s outdoor individual maximum of 2m33 this season by 1cm. This is the world record for outdoor events in 2022.

However, Ivanuk also lost his place when the World Athletics Federation refused to participate in the Eugene World Championships in Belarus, which helped Russia and Russia invaded Ukraine.

Other than Ivanuk and Woo Sang-hyeok, no jumper has ever jumped more than 2m 31 in this year’s outdoor event.

Woo Sang-hyuk said, “I am preparing well as planned. After training in Incheon and other countries until the 30th, I plan to go to the United States and train locally with American high jumpers.”

The dreams of Woo Sang-hyeok and Hwang Seon-woo are also reaching the 2024 Paris Olympics.

If Woo Sang-hyuk’s wish comes true, Korean sports fans will be able to witness for the first time ever, a precious scene in which a Korean won gold medals in both athletics and swimming at the Olympics.

It’s finally over! The Royal Academy has resolved to write the transliteration to use “Turkey” or “Turkia” as appropriate.
Posted onJune 30, 2022June 30, 2022
Menu