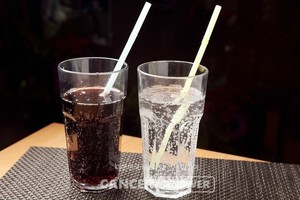 Drinking one or more sugary drinks per day can increase your risk of liver cancer by up to 78%, a new study found.

The research team started with a 1993 survey of 90,504 women aged 50 to 79 years and followed them up for 18 years. Participants were asked to fill out a questionnaire surveying the types and amounts of beverages consumed each day.

At follow-up, 205 of the participants developed liver cancer. Of these, 7% said they drank 340 g (12 ounces) of sugary beverages at least once per day. They were 78% more likely to develop liver cancer than other women.

Additionally, women who drank at least one cup of sugar-sweetened beverages a day had a 73% higher risk of developing liver cancer than women who drank no sugary drinks at all or less than three cups a month.

The researchers found that drinking a lot of sugary drinks was associated with an increased risk of obesity and type 2 diabetes, which are risk factors for liver cancer. They also explained that it could lead to insulin resistance and increased fat deposition in the liver, which could worsen liver health.