Bezos sends out money after returning to Earth: a writer and a chef each receive $100 million | XFastest News

According to reports, Amazon founder Jeff Bezos, the world’s richest man, said after returning from the edge of space on Tuesday that he planned to speak to CNN contributor Van Jones and chef Jose Andres ( José Andrés) awarded 100 million U.S. dollars each. 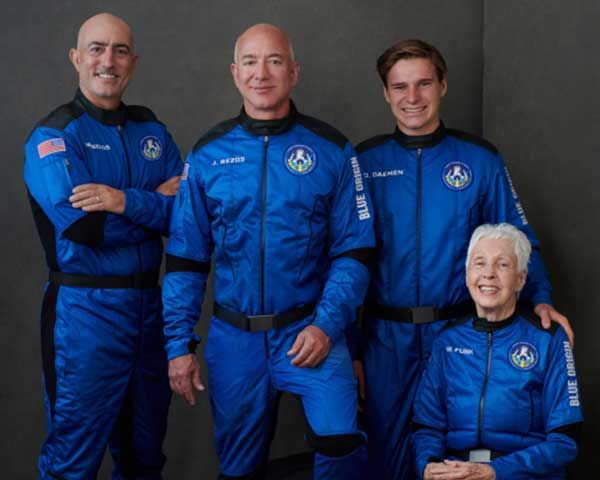 Bezos said Jones and Andres can dispose of the money at will. He said at a press conference held after he landed: “They can donate all the money to their charity, or they can share the wealth. It all depends on them.”

Bezos said that he had planned to announce the establishment of an award called “Courage and Civilization.” This money is related to this “surprise-filled” charity plan. He added that the award aims to recognize people who “showed courage” and worked hard to eliminate differences in a divided world.

“We need solidarity rather than slanderers.” Bezos said, “We need people who fight for their faith in words and deeds. But in the process, they are always polite and never personally attack. Unfortunately, the world we live in is not always gentle and modest. But we still have such an example.”

Jones told Bezos: “I am very grateful for your trust in me.” Later, he added that he would continue to “share the money with other people with similar spirits.”

Andres has worked to provide food to people in need around the world. He said that the reward itself “cannot feed the world alone.” “But,” he continued, “this is the beginning of a new chapter for us.”

CNN host Anderson Cooper hosted the feature report on Tuesday. In the live broadcast after Bezos announced the award, Cooper said with emotion: “This is really surprising.”

He said: “We didn’t know anything about it beforehand.”

Just as Bezos announced his charity plan, he and other billionaires-such as Virgin Galactic founder Richard Branson-were accused of investing in space tourism. Earlier, someone accused Bezos of not using more money for charity. But in recent years, Bezos has donated billions of dollars to charities such as climate change and food banks.

Critics believe that the rich in the world should help people on Earth and improve their living conditions instead of just flying into space. However, Bezos and the supporters of the space program countered that the two things are not in conflict and are both possible.

Bezos said in an interview on Monday: “I think what they said is not wrong. We must do both. We do have a lot of problems to be solved on Earth now, but we also need to look to the future. We humans, our human civilization, have never stopped imagining the future. So we have to do both of these things.”

Why not get a vaccine?Analysis of Psychological Factors...

The British aircraft carrier and the Shandong appeared...

Taliban attack on UN office in Afghanistan; A...

One year after the Beirut bombing, countless families...

Biden, who listened to ‘Chinese cheerleader’, is...

At least 183 people killed in European...

July 18, 2021
We use cookies on our website to give you the most relevant experience by remembering your preferences and repeat visits. By clicking “Accept All”, you consent to the use of ALL the cookies. However, you may visit "Cookie Settings" to provide a controlled consent.
Cookie SettingsAccept All
Manage consent