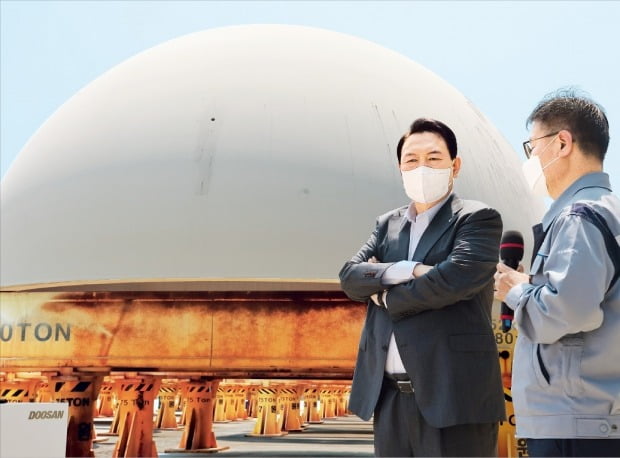 To a parts maker in crisis of survival
Supply of work worth 925 billion won within this year
Next month, ‘Export Strategy Promotion Team’ will be installed
尹 “To the extent that the nuclear power industry is overflowing
A situation in which it was difficult to live even if I applied for it” The government of the past, emergency measures for the revival of nuclear power plants

President Yoon Seok-yeol visits the Doosan Energy Nuclear Power Plant in Changwon, Gyeongsangnam-do on the 22nd and listens to an explanation of the Korean-style nuclear power plant APR1400 from a company official. yunhap news “/>

President Yoon Seok-yeol visits the Doosan Energy Nuclear Power Plant in Changwon, Gyeongsangnam-do on the 22nd and listens to an explanation of the Korean-style nuclear power plant APR1400 from a company official. yunhap news

See pages A1 and 3 of this magazine May 18th

At the meeting that day, the Ministry of Trade, Industry and Energy and the Ministry of SMEs and Startups announced ‘Measures to Support Nuclear Power Plant Industry Partners’ and ‘Measures to Support Small and Medium-sized Nuclear Power Plants’. Specifically, they decided to place an order for work worth 92.5 billion won this year from a nuclear power plant supplier, and to give new jobs worth over 1 trillion won by 2025. It also promised 100 billion won in policy funds and 380 billion won in financial support to nuclear power plant parts makers who were in crisis.

In addition, it has decided to invest 670 billion won in research and development (R&D) this year and more than 3 trillion won from next year to 2025 to strengthen the technology in the nuclear power plant industry. The construction of Shin-Hanul Units 3 and 4, which was halted during the Moon Jae-in administration, is also scheduled to resume early within the year after reflecting the basic plan for electricity supply and demand.

The Yun Seok-yeol government originally planned to resume construction of Shin-Hanul Units 3 and 4 in 2025. However, in response to the criticism of nuclear power plant partners that “it is difficult to hold out until then,” they decided to place an order for over 1 trillion won in work and to accelerate the construction of Shin-Hanul Units 3 and 4 as much as possible.

The government also announced that it will strengthen its nuclear power export capacity. High-level government officials have decided to carry out order-taking activities for countries that are close to selecting a business, such as Czech Republic and Poland, and to diversify export methods such as labor, equipment, operation, and services. A nuclear power plant export strategy promotion team, which will serve as a control tower for nuclear power exports, is also planned to be launched in July.

The promotion group is a public-private joint organization headed by the Minister of Trade, Industry and Energy. Relevant ministries, electric power/financial corporations, and experts can discuss various cooperative package projects such as defense industry, construction/infrastructure, information technology (IT), and financial procurement as members. do.

President Yoon Seok-yeol visited Doosan Energy in Changwon, Gyeongsangnam-do on the 22nd and had a meeting with representatives of business partners in the nuclear power plant industry. President Yoon shakes hands with attendees. yunhap news

“I’m pretty sure we wouldn’t have a competitor now if we hadn’t been stupid over the past five years and had built this nuclear ecosystem more robust.”

These are the words that President Yoon Seok-yeol said while visiting a nuclear power plant parts manufacturing site for the first time since taking office on the 22nd. President Yoon, who looked around the production site devastated by the nuclear phase-out policy of the past five years, said, “I wonder if they would have made such a decision if the people involved in the nuclear phase-out had seen this enormous facility larger than Yeouido.” . It was a strong criticism of the previous government’s nuclear phase-out policy. President Yoon announced that he would promote the resumption of construction of Shin-Hanul Units 3 and 4 quickly and efficiently. He also showed his will to engage in ‘nuclear power plant sales’.

○ Ask 20 questions about “What is a nuclear reactor?”

May 18, A1 page of this magazine reporting the nuclear power plant Ilgam Cliff

President Yoon visited the Doosan Energy plant in Changwon, Gyeongnam, which is a nuclear power plant parts manufacturer. We toured the site for about 15 minutes with Minister of Trade, Industry and Energy Lee Chang-yang and Small and Medium Venture Business Minister Lee Young.

While looking at the nuclear reactor and electricity generator outside the plant, President Yoon asked questions about the progress of the process and expected losses. These parts were scheduled to be put into Shin-Hanul Units 3 and 4, which construction was halted in 2017. When a Doosan Energy official said, “If the power plant (construction) is canceled, it will inevitably incur a loss of about 490 billion won,” and President Yoon said, “I’ll have to be compensated.”

Upon entering the factory, President Yoon listened to an explanation of the parts supplied to Shin-Kori Unit 6 and toured the forging plant with a press facility with a capacity of 17,000 tons.

An official who explained the press facility said, “We invested 200 billion won and started operation in 2017. Unfortunately, however, since there has been no new nuclear power project since the start of operation, nuclear products have not been produced,” he said. During the inspection, President Yoon showed great interest in the nuclear power plant industry by asking about 20 questions such as “Which is a nuclear reactor?” and “When is the press machine used?”

Regarding the resumption of construction of Shin-Hanul Units 3 and 4, he said, “We will comply with legal procedures and standards, but we will shorten the time as much as possible and promote it efficiently.”