[CEDEC 2016]Make idols even more cute! Insatiable pursuit that Cygames creators showed in the development and operation of “Deleste” | gamebiz

Cygames will hold a session entitled “Idolmaster Cinderella Girls Starlight Stage Production Case Study / Art Edition-A Method to Express a Total of 60 Idols as Attractively as possible and Focus on Live (Modeling and UI / UX Design)”. It was held at “CEDEC 2016” held on the 26th of March. It is divided into a modeling part and a UI / UX design part, and this time we will report on the modeling part.

In the modeling part, Mr. Yuma Tanimoto (pictured), 3DCG artist team manager of the Cygames designer department, took the stage. “THE IDOLM @ STER CINDERELLA GIRLS STARLIGHT STAGE” (hereinafter referred to as “Deleste”) is a rhythm game derived from “THE IDOLM @ STER CINDERELLA GIRLS” distributed on “Mobage” and won the top spot in the sales rankings of the App Store and Google Play. It has a proven track record and is well established as one of the popular titles.

■ How to faithfully reproduce a 2D idol as 3D

However, one of the biggest features of this work is that the idols represented as illustrations in the browser game perform live in 3D. By making it 3D, many producers may have noticed the new charm of idols. When Cygames turned 2D into 3D, the first priority was to reproduce the illustrations. He said that he had decided on the specifications so that it would work on smartphones without any problems and look solid and cute.

The specifications are as follows. Although it is a smartphone application, you can see that it is produced with the same specifications as “PlayStation 3”. In recent years, the specifications and technology of smartphones have improved, and it has become possible to express those of stationary home-use machines a while ago. In order to reproduce the cuteness of the idol, it was revealed that the specifications were quite high specs in terms of polygons, number of bones, texture area, etc. 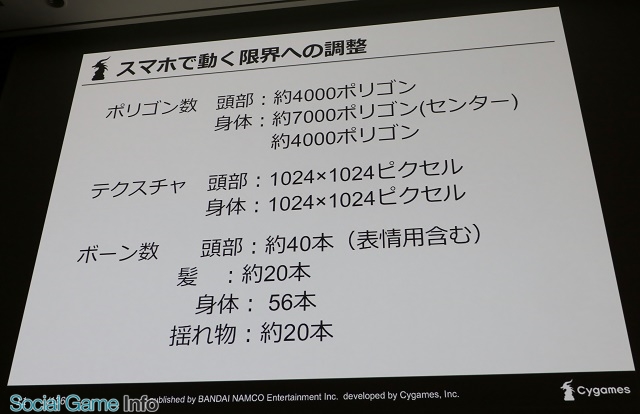 First, we made fine adjustments to the outline to reproduce the illustration. It seems that the general method of highlighting the model extruded in the normal direction was taken, but if it is left as it is, the outline will be a single color, so apply the character texture to the outline model. By adjusting the lightness to darker, the skin color becomes brown outline, the white gloves become gray, and the jewel part becomes dark blue, expressing an illustration-like outline. Not only the color but also the thickness of the outline was adjusted. I also made thin outlines such as the tips of the hair and the ends of the costumes. 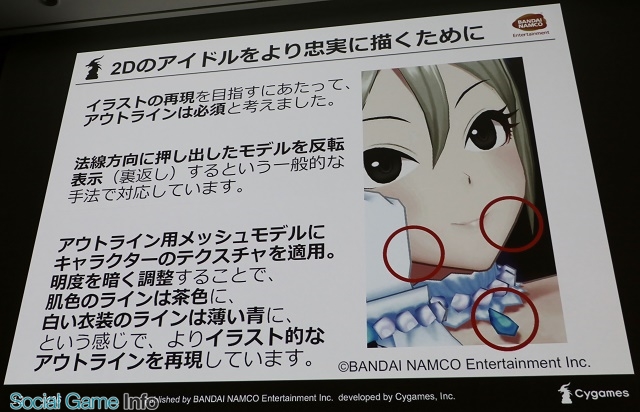 Next, we moved on to how we expressed the individuality of each of the 60 idols. Not only height, but also skin color, hair length, hair color, hairstyle, chest size, etc. have various characteristics, and it is not very easy to faithfully convert them into 3D. Here, Cygames said that while it was ideal to create a model of each idol, due to problems with work efficiency and data capacity, the body parts were standardized for each body type and combined. By the way, regarding the height LL, it seems that it was made only for Kirari Moroboshi. 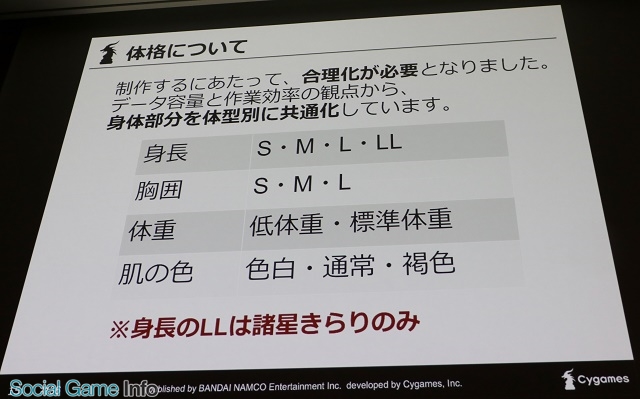 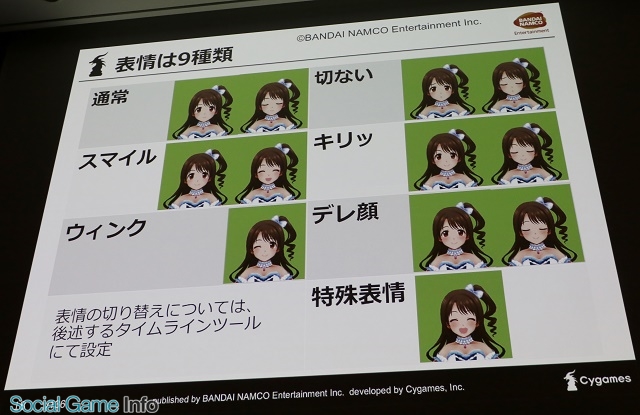 What is a “special facial expression”? On the left side of “Rika Jougasaki”, you can see a star in your eyes. Jogasaki has stars in his eyes. This is said to be seen only at the timing of “DOKIDOKI rhythm”. It seems that not only Rika Jougasaki but also other idols can be seen when singing. 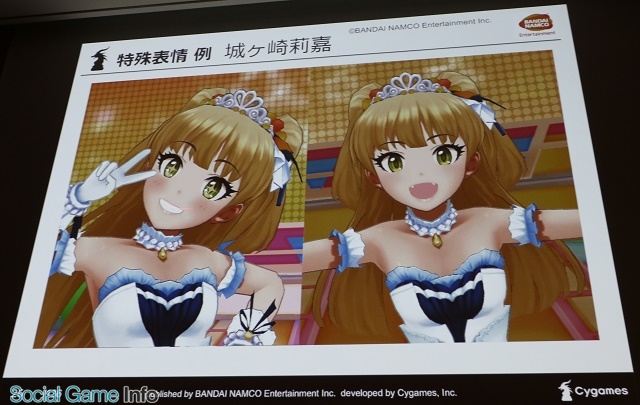 By the way, “Nono Morikubo” is an idol who doesn’t look at me. In “Deleste”, every idol usually looks at the camera and the audience during the live performance, but he said that he introduced a special specification here so that he would not make eye contact. 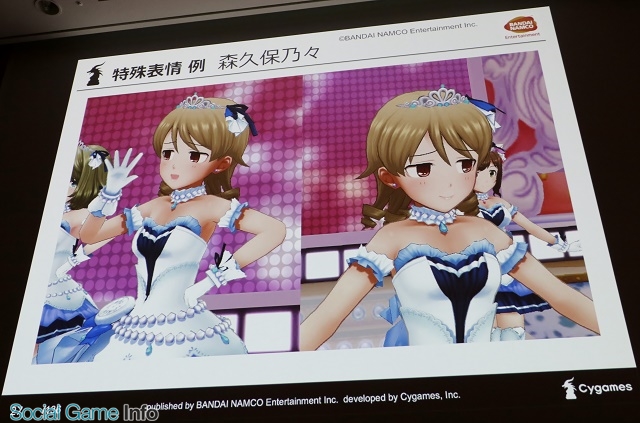 We also paid close attention to the mouth to enrich the singing expression. Two large and small patterns of “A”, “I”, “U”, “E”, “O”, “N”, and “Smile” were prepared as lip-sync targets. I chose two patterns, large and small, because it doesn’t look like I’m singing with only a big mouth. By combining these well and setting it, I finished it so that it sings with a rich expression. 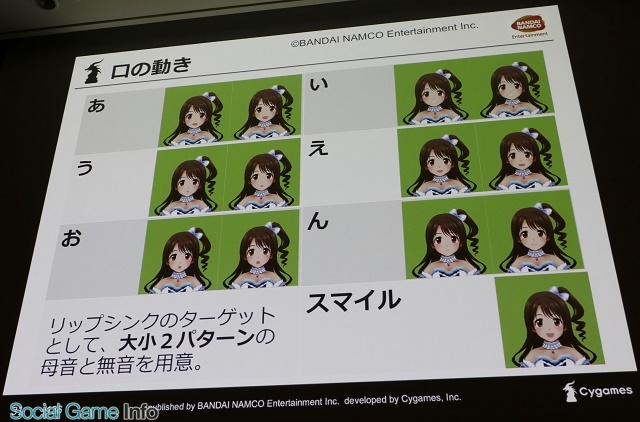 So far I’ve written about idol modeling, but next is live dance. The point here is how to achieve natural movement. All idol dance data is created based on motion capture. The choreographer choreographed each song, and the actors danced and captured it. However, the motion designer worked on the finger part by hand and finished it so that it would move naturally.

Dance is not complete by itself. In the live part, a group of 5 people will perform the stage. It is ideal to create motion data for 5 people, but due to the relationship between data capacity and man-hours, the same motion data is flowing. However, since it seems mechanical that everyone is doing exactly the same movement, I intentionally made it “misaligned”. If you look at the image on the slide, you can see that the angles of the arms of the five people are slightly different. As a result, a realistic dance like a real idol is realized. 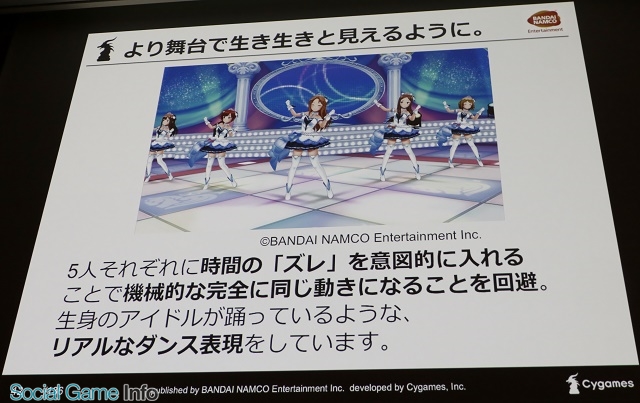 Then how does the character model make it look like a real idol is singing? Lip sync is set by an in-house tool (in-house development tool). By importing vowel data from lyrics data, it is said that it is adjusted on the tool. By using this tool, it is possible to link the movements and facial expressions of idols. 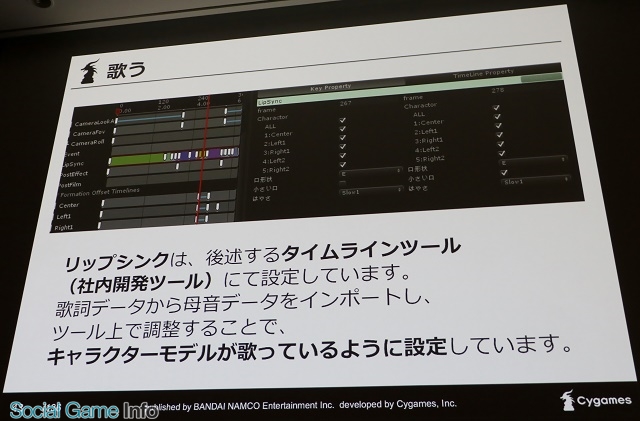 So far we have seen development, but how do you do “operation” that is as important as development? Cygames seems to make full use of the tools developed in-house. It’s called “Cygames Unity Timeline Tool”, and you can set facial expressions, eyes, lip sync, color of lights, and video material that flows on the monitor behind the stage on Unity. By using this tool, live production became easier, and it became possible to add 3 to 4 songs a month at a surprisingly high pace. 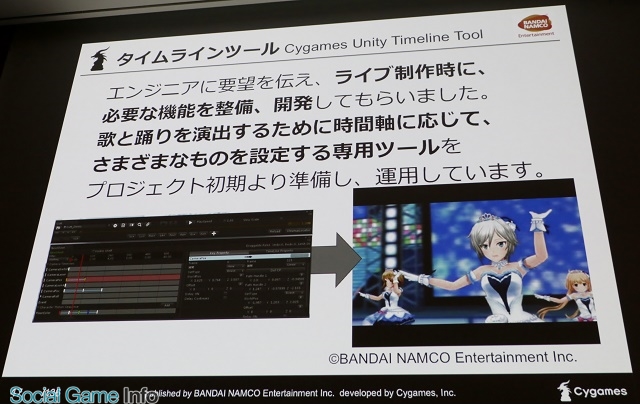 When adding a new idol, by adjusting the angle of view to reduce the perspective of the camera during 3D modeling, it is possible to produce with almost no perspective. Furthermore, by displaying an illustration right next to the model and working while looking at it, the production is more conscious of the illustration from the initial stage of production. 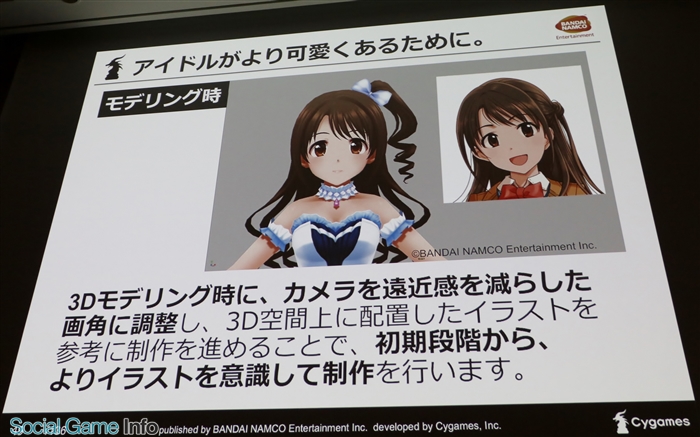 The illustrator in charge of “THE IDOLM @ STER CINDERELLA GIRLS” is checking the 3D model check system. The check part is so detailed that it cannot be seen at first glance. For example, in the case, it is changed so that the top of the head is rounded and the eyes are enlarged. By making such small corrections, the idols are expressed more cutely. 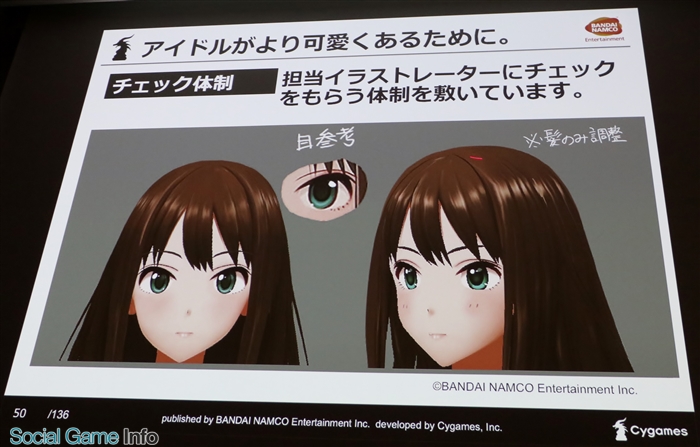 Also, in order to pursue idol-likeness and cuteness, we will continue to add specifications. Here, I introduced the case of “Yoshino Yorita”. It is said that there was a request from planners and illustrators to put on furisode for Yoshino. At the time of release, we couldn’t implement special costumes, but in order to value strong demands and the individuality of the idols, we examined with engineers and optimized the cross-simulator processing. As a result, the processing load on the CPU has been reduced, the specifications for the number of extra bones for cross control can be expanded, and costumes with special shapes can be added. 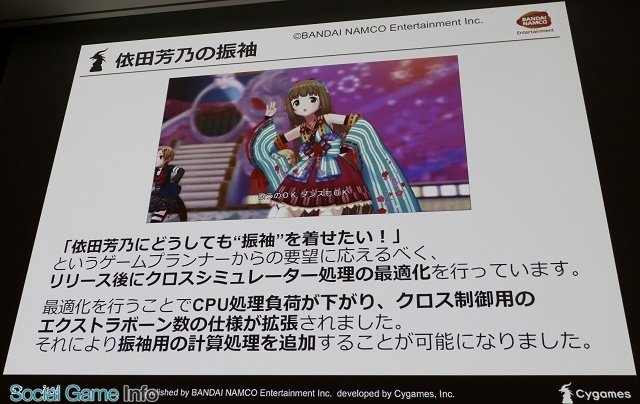 Furthermore, the character “Yu Ota” was released a few months ago, but at the beginning of the release, I decided that it would be difficult due to the specifications, so I decided not to draw her characteristic “Mole”. However, the producers began to say that there was no mole, so the team examined it and added a new special specification. In addition to “fair / normal / brown”, “mole difference” has been added so that “mole” can be displayed on the chest. I’m only surprised at this response. 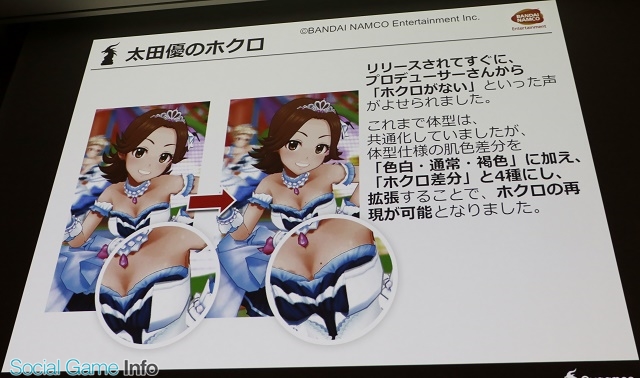 In addition, as a result of improvements in development technology from the time of release, it has become possible to make idols in the early stages of release more cute and resemble illustrations. At the timing when SS rares of idols appear, we are brushing up idols of normal rarity, though not all. At the beginning of the release, I thought that there was no problem, but now that my skills have improved, there are things that I want to fix, and I am brushing up around that. “I think it has nothing to do with sales, but I want to cherish the passionate requests and thoughts of the developers. Moreover, if I do that, the producers will be pleased, so I try to respond as much as possible.”

Since the skills of both 3DCG creators and supervised illustrators have improved significantly from the time of release, it is possible to give specific and accurate instructions. The flow of hair and the silhouette of the chin are very detailed, and I am brushing up every day to make the idols look more cute. 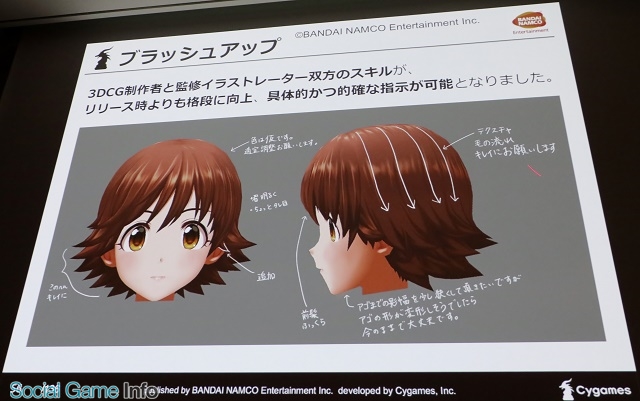 Finally, in summary, Cygames emphasizes “reproduction of illustrations”, and emphasizes the points of adding individuality, giving a sense of presence, and creating a system that can maintain (improve) quality. , Finished the lecture. 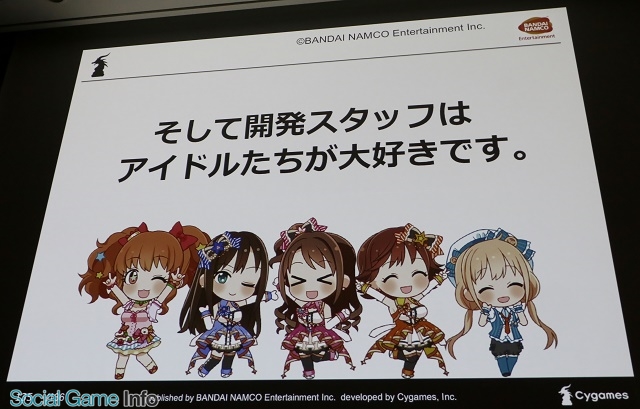 Nevertheless, prepare to reduce the scene of ‘Kim Min Kwee’ from the series as much as possible. After the issue of cheating on the ex-girlfriend

February 23, 2021
We use cookies on our website to give you the most relevant experience by remembering your preferences and repeat visits. By clicking “Accept All”, you consent to the use of ALL the cookies. However, you may visit "Cookie Settings" to provide a controlled consent.
Cookie SettingsAccept All
Manage consent