random news
Prosecutors are once again targeting Democratic Party leader Lee Jae-myeong for the alleged corruption in the Daejang-dong development. This year, the newly reorganized Daejang-dong investigation team led to a change in the situation, starting with Yoo Dong-gyu, the former head of the planning headquarters of Seongnam Urban Development Corporation, and securing new statements from lawyer Nam-wook, a private contractor, and Kim Man-bae, a major shareholder of Hwacheon Daeyu Asset Management (Hwacheon Daeyu). The revelation that a hidden portion of CEO Lee’s closest aide, who is recognized by others is at stake in ‘Chunhwa Dongin No. 1’, which received the most dividends through the Daejang-dong development project, continues, and the prosecution’s investigation into CEO Lee is also on the fast track.

Most threatening to Lee are the allegations listed in the warrant for Jeong Jin-sang, the former head of the political coordination office in the representative office of the Democratic Party. While serving as Seongnam City’s policy secretary when CEO Lee was Seongnam Mayor, Jeong was accused of promising to receive 42.8 billion won with Daejang-dong, former vice president of the Democratic Research Institute, and Yoo Dong-gyu, former head of the planning headquarters of Seongnam Urban Development Corporation, as a developer, arrested on the 19th. The prosecution considered that half (24.5%) of Mr Kim Man-bae’s share in Cheonhwa Dongin No. 1 was ‘the mayor’s office share’. Former general manager Yoo Dong-gyu and attorney Nam-wook, who were recently released one after the other, openly talk about this fact inside and outside the courtroom and gives more effort to the prosecution’s investigation. Unlike last year, the reason for changing the statement is explained with the intention that they will be punished for their fault only. 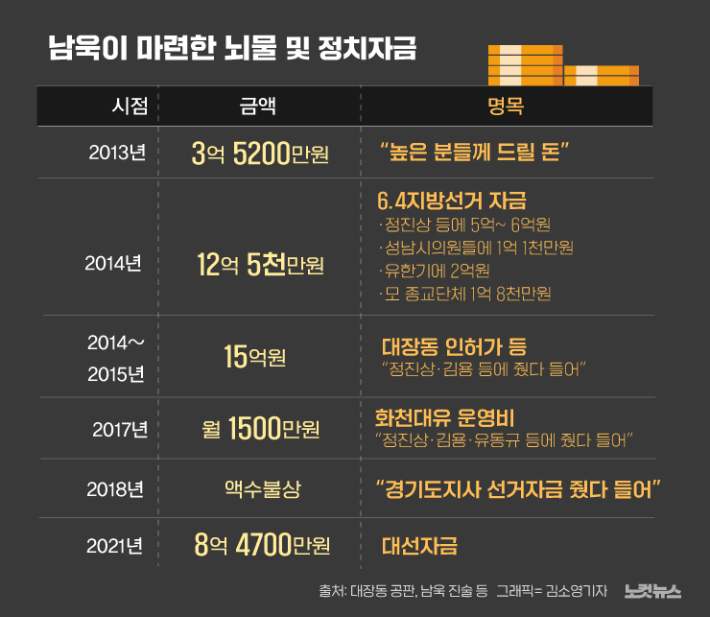 Click or enlarge to see the original photo.
Director Yu ignited a flare by revealing the fact that he had provided illegal political funds to former vice president Kim. He said he personally gave Nam’s lawyer money to former vice president Kim. Attorney Nam Wook, who was released on the 21st because the arrest period ended, continues to make bombastic comments every day. Attorney Nam poured out his decision from the day of his release. In court, he said, “Chunhwa Dongin No. 1 is a share of Mayor Lee Jae-myeong,” “the 2014 Seongnam Mayor’s re-election campaign funds, and the 2018 Gyeonggi-do gubernatorial election funds were donated.” As a basis , he said, “I knew that Kim Man-bae said that.”

Kim Man-bae, who was released from prison on the 23rd, has not yet opened his mouth, but the prosecution said in the warrant that he had already acknowledged this fact in the prosecution’s investigation. Prosecutors wrote that in former boss Jeong’s warrants, he stated to the effect that “one-third of the profits from Cheonhwa Dongin No. 1 should be given to Yu Dong-gyu and two-thirds to Dong-gyu’s brothers (Jung Jin-sang and Kim Yong).” He also said that Mr. Kim acknowledged the fact that he had specifically sought a way to pay dividends to Cheonhwa Dongin No. Mr. Kim revealed that he was discussing four ways of introducing the dividend to avoid legal problems with accountant Jeong Young-hak, who was responsible for designing Daejang-dong’s business structure.

The prosecution also secured physical evidence to support their statements. In the arrest warrant for Chief Jung, transcripts of conversations and calls (‘Jung Young-hak transcript’, etc.), text messages, call transactions and accounts, inbound and outbound vehicle details of those involved making and distributing money and valuables, location and distribution method of receiving money and valuables Authentication history, forensic evidence on mobile phones and personal computers, and various documents were presented as evidence. Prosecutors insisted that “the credibility of the statement is very high”, saying, “Former general manager Yoo and lawyer Nam are revealing the material truth even at the cost of their own punishment.” 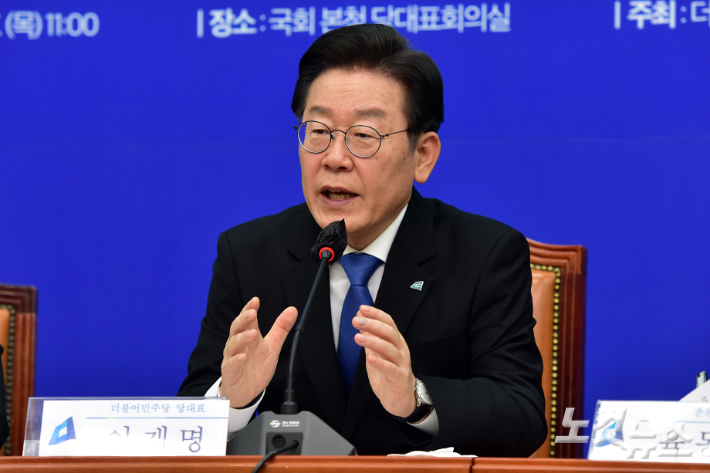 Reporter Yoon Chang-won
Accordingly, it is expected that Lee’s investigation will be held soon. Prosecutors believe former Chief Jeong and former Deputy Chief Kim accepted bribes through local authorities and colluded with private companies. The prosecution is expected to focus on confirming the suspicion of collusion with the group close to CEO Lee. According to Supreme Court precedents, even if some of the accomplices did not participate in the process of plotting the crime, if the parties implicitly shared their will to commit the crime, they are considered accomplices.

It is said that while tracking the money of the Daejang-dong gang, they also started tracking the accounts of CEO Lee and his family. The prosecution is said to have recently subpoenaed an informant on suspected misuse of a corporate card by Lee’s wife, Kim Hye-kyung, and asked for the hundreds of millions of dollars in cash said to be kept at Lee’s home. This informant is known to have stated what Mr. Bae, who served as Mr. Kim’s assistant, said was about 100 million to 200 million he earned in cash and love affairs linked to an account going back and forth to Lee’s home. Prosecutors say they are looking into whether the money flowed from the Daejang-dong gang to CEO Lee.

Representative Lee immediately declined through the Democratic Party’s Office of Public Information. On June 28 last year, in order to process 270 million won, including election deposits for the presidential primary school and the primary office lease, the money held at the time was deposited into the provincial Nonghyup account, which was normally negotiated. It was explained that the fact that the cash was being held, including the fact that there were such changes in deposits, was also noted in the 2020 and 2021 public servant property reports. Representative Lee also protested, saying, “ If you continue to steal the account like this, the account will expire.”