Lusail Stadium, the home stadium of the World Cup in Qatar, is currently the world’s largest professional football stadium with the most complex system, the highest design standards, the most advanced technology, and the highest international level. cable-membrane layer roof with the largest span in the world today. This is the first time that a Chinese company undertakes the construction of the main stadium of the highest World Cup, and won the bid as the general contractor of design and construction, The technical difficulty and construction challenges are obvious.

China Railway Construction has adopted BIM technology and smart construction technology throughout the project life cycle to greatly improve construction efficiency and construction quality. At the same time, along with the application of a series of new technologies and methods, it has not only realized sunshine simulation, intelligent temperature control, and automatic lawn aeration. , seat ventilation and other intelligent control effects, and has also received a five-star certification from the FIFA Green Building Evaluation, making it one of the stadium projects with the highest level of green construction and the most energy-saving and environmentally friendly in the world.

BIM technology of the entire life cycle creates the largest deformation in the world, and all the difficulties are solved in the drawing stage

The design of Lusail Stadium is inspired by the traditional Arabic enamel lantern pattern The overall shape is like a golden bowl filled with dates, and the curtain wall facade changes in a curved shape from top to bottom. The total area of ​​the outer curtain wall is about 60,000 square meters, and there are more than 4,200 lifting units consisting of nearly 40,000 small triangular units, and the size of each small triangular unit is different. Turning such an artistic design into one magnificent building has a great impact Technology is an extremely high test. 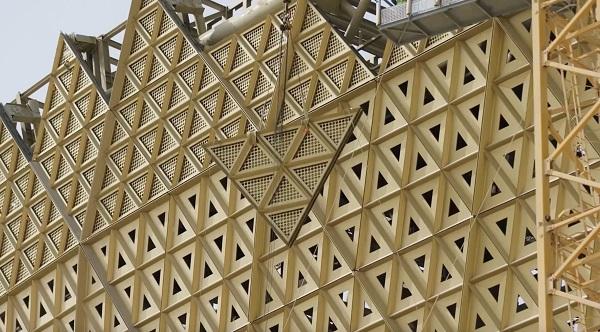 The outer curtain wall consists of almost 40,000 small triangular units, each of which has a different size

“We were very excited when we took over the project, but soon we felt that there were many difficulties and pressures.” In the preliminary planning and design stage, Li Bai, the Chinese chief engineer, often communicated with the architectural designer of the Lussel Stadium to carry out a large number of BIM Digital simulation. The shape of the steel structure changes at different temperatures and in different stages of construction, positioning and installing 4,672 connectors correctly during the dynamic changes is the biggest difficulty in the curtain wall project. The builder carried out a simulation analysis for this, allowing the connectors to have a certain margin of adjustment in each direction, reducing construction deviations, and ensuring a good combination of the curtain wall structure and the main steel structure.

Looking up at the main tall building, Leo Nidas, a BIM engineer from Greece who participated in the entire project construction process, is full of pride: “Relying on the advanced digital technology adopted by Chinese companies, my Chinese colleagues and abroad and I have repeatedly made construction errors at a height of 70 meters. controlled at the millimeter level.”

BIM technology is a data management tool, mainly used for engineering design, engineering construction and engineering management. By sharing and transmitting the data, information, project planning, etc. generated during the construction data process, this technology enables the personnel involved in the construction of the project to understand the construction information accurately. and respond in a timely manner, thereby improving production efficiency and saving. production costs. The application of BIM technology is relatively common in the world, but this is the first time it has been applied in the whole life cycle of the stadium. After China Railway Construction won the bid, an international BIM management team was formed, consisting of more than 20 top BIM engineers from China, Greece and India. According to Kang Qingming, project design director, Lusail Stadium uses the digital twin model of the BIM technology center to coordinate project management The data volume of the central model is as high as 10TB, and the number of drawings drawn is more than 33,000 .

Ahmed Otaibi, a Jordanian engineer who participated in the installation of equipment in the museum, presented that the technical team used BIM technology to simulate the temperature, humidity and speed of air flow in the location to meet the comfort requirements of the audience. At the same time, taking into account obstacles such as large cameras and media broadcast platforms, the seats are set up reasonably to ensure that the audience’s line of sight meets FIFA requirements.

The smart stadium is environmentally friendly and energy saving. Watching the ball is comfortable, ventilated, drained, and simulates sunlight to grow the best lawn.

Li Bai introduced that during the design phase of Lussel Stadium, the China Railway Construction project team focused on the innovation and application of green building technology, and carried out simulations of passenger flow, temperature environment, audience view, indoor lighting, and lawn lighting. ■ The Football Federation’s latest requirements have drawn up a green technology innovation application plan. During the actual construction process, the project team introduced a number of internationally leading green building technologies and methods, and strived to create a comfortable and natural viewing and operating environment, making Lusail Stadium one of the most energy efficient stadiums -efficient and environmentally friendly in the world.

In order to bring the audience a comfortable viewing experience in the hot and dry climate, the project team carried out the simulation analysis of the sunlight temperature inside and outside the stadium, and designed the stadium as a structure double curtain wall. More than 4,200 triangular unit aluminum plates are installed on the outer curtain wall to form a bowl-shaped arc, while the inner curtain wall has fully enclosed heat insulating glass to improve the heat insulation performance of the entire building. The roof adopts high-performance PTFE membrane structure acoustic roof.On the basis of ensuring the beautiful appearance of the stadium, it also has a certain temperature control effect to reduce the consumption of cooling energy. 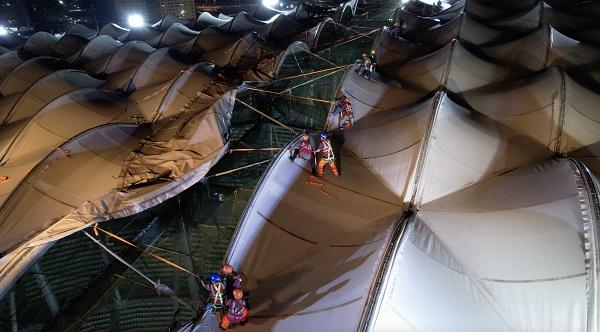 The acoustic cable-membrane structure is built, this structure not only ensures the beautiful appearance of the stadium, but also has a certain temperature control effect

The grandstand seat ventilation system is also a major innovation in ventilation technology at Lusail Stadium. There is a separate cooling station outside the stadium, and water-cooled air-conditioning vents are installed under the seats in the stands, and the air supply under the seats is used instead of high-powered air-conditioning units , which greatly reduces energy. consumption. At the same time, the software simulates the micro-environment of the air flow inside the stadium, and adjusts the location, size, shape and spacing of the air conditioning outlets to achieve the perfect combination of air conditioning and natural ventilation in the auditorium to ensure the comfort of the audience.

The application of lawn aeration technology at Lusail Stadium is a world first, providing better conditions for lawn growth and maintenance. A piping system installed in the soil of a football field turf connects to off-field air handling units for soil air exchange and drainage. The detection equipment installed in the lawn soil automatically activates different methods according to the needs, improving the survival rate of the grass and reducing the cost of maintenance of the lawn.

The healthy growth of lawns is also inseparable from the lighting system that simulates real lights. China Railway Construction has effectively reduced the stadium’s power consumption while meeting the FIFA night lighting requirements for the stadium by choosing lighting and optimize lighting setup. 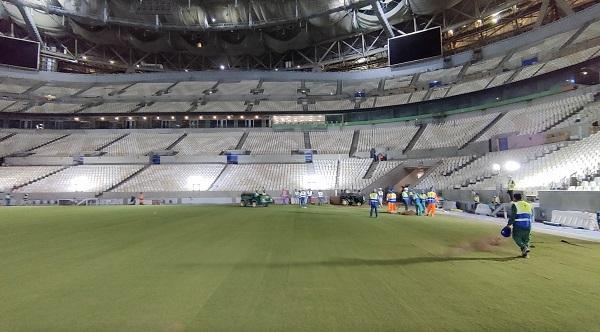 “The design and construction of the Lusail Stadium complies with the concept of sustainable development and green development.” Joseph Orr, founding chairman of the Gulf Research and Development Institute, said the stadium had achieved the Global Sustainability Assessment’s five-star certification standard. System (GSAS), setting a new standard There is a model of a green building.

Stojičić: Educators contribute to strengthening the education system in Srpska