Huawei Vice Chairman Meng Wanzhou waves to a welcoming crowd before disembarking from a charter plane at Bao’an Airport in Shenzhen, China on the night of the 25th. Shenzhen = Reuters Yonhap News Agency

China is singing a triumphant hymn after the release of Huawei Vice Chairman Meng Wanzhou after the US Justice Department delayed indictment. They are excited about showing off their unity by boldly carrying out their demands without bending over. However, it is unclear whether China’s confidence will deliver another result. Although one sediment has been resolved, there are still many obstacles in China’s path to speed up its diplomacy with the US. 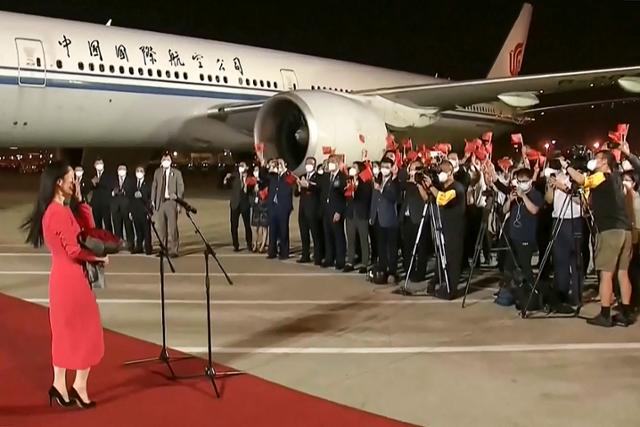 Huawei Vice Chairman Meng Wanzhou (far left), who descended from an airplane trap, covers his face with his hand on the red carpet as he is greeted by the crowds flocking to the airport. AFP Yonhap News

While presiding over the Politburo meeting of the Communist Party of China in July last year, Chinese President Xi Jinping emphasized that “many problems we are facing are mid- to long-term, and must be recognized from the perspective of global warfare.” He formalized the concept of ‘earth warfare’ established by Mao Zedong during the anti-Japanese war and civil war. Six months ago, the first phase of a trade agreement was reached with the United States, but the war was intensified.

Meng Wanzhou’s return is the first notable achievement since President Xi’s declaration of a global war. He served two years and nine months without pleading guilty. This contrasts with the case of Alstom, France, where the CEO of a subsidiary was arrested at an American airport in April 2013 for violating the Foreign Corrupt Practices Act and fined $772 million (about 900 billion won). In addition, Alstom took the shame of selling its major business to an American company. It is not unreasonable to exclaim that China has “dignified”. Foreign Ministry spokeswoman Hua Chunying praised Meng Wanzhou as a martyr, calling it “political persecution.”

However, while Meng Wanzhou was under house arrest, Huawei suffered fatal injuries. It plummeted as the level of US pressure on China’s advanced technology increased. The global smartphone market share, which once competed with Samsung Electronics, fell from 20% in the second quarter of last year to 4% in the first quarter of this year due to the blockade of parts procurement due to U.S. sanctions. Sales in the first half of this year were down 29% from the previous year.

Chinese people shouting at the airport to welcome Huawei Vice Chairman Meng Wanzhou, who was released from Canada after two years and nine months of arrest. AP Yonhap News

In July, Chinese Vice Foreign Minister Xe Feng and U.S. Deputy Secretary of State Wendy Sherman met in Tianjin. At the time, the list of demands for improvement proposed by China also included a request to “stop the request for repatriation of Meng Wanzhou to the United States (who was under house arrest in Canada).” It is unusual for China to take the offensive by forwarding its demands to the US side first at the summit.

Two months later, Meng Wanzhou returned home safely, and China’s strategy worked. Chinese media and experts said on the 27th that “China’s diplomacy has been a brilliant victory in China, which has maintained a great power line against the United States based on its strong national power” (Xun Wang Teng), and “The ability and will of the Chinese government to protect the rights and interests of citizens living abroad has been proven. “(Professor Li Haidong Academy of Foreign Relations), and so on. There were also voices calling for the resumption of negotiations within the year, calling for the removal of the trade barrier that triggered the conflict with the United States. Chinese ambassador to the US, Chin Kang, sent a reconciliation gesture in line with Meng Wanzhou’s release, saying, “The world’s first and second largest economies must innovate their interactions in new ways.”

The United States, on the other hand, is not in a hurry. The remaining improvements that China requested in July included the removal of restrictions on visas for Chinese Communist Party members and international students, the lifting of sanctions against Chinese officials and institutions, and the cessation of suppression of Confucius Institutes and Chinese companies. It is not easy to break the shackles at a time when US President Joe Biden calls Xi a “dictator” and US government officials also call the Chinese Communist Party a “slayer”. The US and China are still closing their consulates in Houston and Chengdu, which were closed in July last year. It was a long way from discussing normalization of relations so much that even the symbolic measures were unsatisfactory. 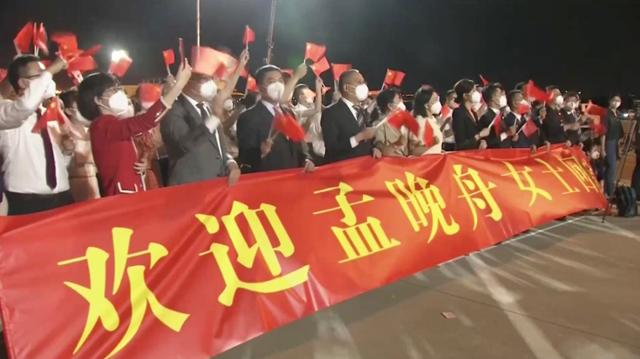 On the 25th, Meng Wanzhou descended from an airplane trap in a red one-piece outfit with a five-star red flag badge on his chest. Shenzhen Bao’an Airport, where the welcome ceremony was held, was also covered in red. A red carpet was spread on the floor, and the opening song of the main event, ‘Singing the Fatherland’, rang out. When Meng Wanzhou was moved by saying, “If there is a color in beliefs, it will be the red color of China,” the Global Times said, “The color of patriotism is also red,” and stimulated Chinese sentiment.

The ‘Red Wave’ is a good thing to continue the patriotism craze that exploded after the 100th anniversary of the founding of the Communist Party in July. When China sent back US pilots in 2001, in the United States, even the president went out to the airport to welcome the hero’s return. This is when an American reconnaissance plane collided with a Chinese fighter in the high seas near Hainan Island in the South China Sea, killing a Chinese pilot and detaining 24 American pilots on an emergency landing. As a result, Meng Wanzhou’s return to Korea was broadcast live, emphasizing the strength of the Chinese in the fight against US oppression.

In the face of such an inward unity of China, the United States is gathering forces from the outside to hold China together. In order to block the influence of China, they are planning to build a ‘triple encirclement network’ that includes Korea and Southeast Asia in addition to AUKUS (USA, UK, Australia) and Quad (USA, India, Australia, Japan). President Biden said in a speech to the United Nations General Assembly on the 21st (local time) that he would not pursue a new Cold War, but China is not a little dissatisfied with the frustration of being trapped in the yoke of the Cold War. The U.S. is pushing China into a zero-sum game by engaging in alliances and oppressing China militarily, advocating values ​​and ideologies different from those of China, and encouraging technological hegemony and geopolitical competition. Woo Shin-bo, director of the Institute for International Studies at Fudan University, told Phoenix Mang, “The US and China are in a state of semi-cold war and semi-cold war, if not a new cold war. .

Nude shooting with only ‘white paint’ painted all...

Labor unions are getting stronger due to the...

Biden: “I quit church because I felt betrayed...

Nude shooting with only ‘white paint’ painted all...

In memory of former US Secretary of State...

China does its utmost to assist the...