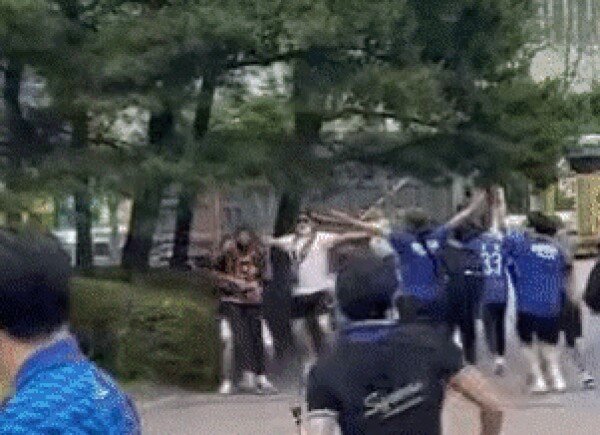 The mother of the victim in connection with the Suwon Samsung fan’s assault on FC Seoul fans expressed her feelings, saying, “I can’t stand the anger.”

The victim’s mother, Mr. A, explained the circumstances of the incident through the online community ‘Bobae Dream’ on the 21st and started public discussion.

The incident occurred on the 19th at around 5:30 pm in front of the Suwon World Cup Stadium before the start of the Hanawon Q K-League 2022 Round 16 match between Seoul and Suwon. The victim, who was wearing a FC Seoul uniform that day, was standing alone on a cell phone and waiting for her friends and brother.

At this time, Mr. A claims that a group of about 5 Suwon Samsung fans, including the representative perpetrator, suddenly appeared singing cheering songs and forcibly hugged the victim.

The victim did it again even though he shook his shoulder, and suddenly the assailant grabbed the victim’s waist from behind, lifted it, and threw it on the floor.

Person A explained, “The child fell from the head on the sidewalk block, but instinctively stepped on his arm and fell. Afterwards, several people surrounded the victim and told him to take off his uniform, and the victim, frightened, took off his uniform and tried to escape the scene. However, a group of other Suwon Samsung fans sang louder cheering songs with their arms outstretched, surrounded the victim and prevented them from escaping.

Person A said, “The child was terrified and managed to escape, but a man followed and sang a loud cheering song until the end. “It was only after this man went to the stadium that the child was freed from the fear.”

The victim followed the perpetrator and took a picture of his face. Regarding this, Mr. A said, “The perpetrator in the photo is covering his face with his hand, but he has a funny expression on his face.” There was no regret at all,” he exclaimed.

Then, the victim’s father faced the assailant over a video call and asked what had happened. The perpetrator said, “I was trying to cheer together, but I accidentally fell while lifting.”

Regarding this, Mr. A said, “The perpetrator shamelessly lied. That’s all he apologized for.” He said, “My husband has a student-like face and the young supporters are excited, so I thought it was a mistake, so I apologized and ended it. My child reassured his father that it would be okay to receive an absurd apology for fear that if we make the situation bigger at that time, we might not be able to watch soccer with our friends.”

The next day, Mr. A, who saw the article and the original video of the assault, complained that his hands and feet were shaking in great shock. He said, “I am so pitiful that my child, who must have been frightened and terrified, without anyone helping, even though he could see a lifeguard nearby, surrounded by a bunch of mocking adults, only tears come out. When I see a child with bruises all over his body, unbearable anger rises.”

Read Also  "Writer Kim Eun-hee vs daughter, what if you fall into the water at the same time?" Director Jang Hang-joon's sensible response

Finally, he said, “I hope that this incident will stop threatening and mocking the supporters of the opposing team.” He added, “There is a culture where people can passionately support the team they want in the arena without conflict with the fans of the opposing team. I want it to be established,” he said. He added, “I will do my best to handle the case until the end.”

Meanwhile, the Suwon Jungbu Police Station, Gyeonggi Province, received a report on the incident from the victim’s parents on the afternoon of the 20th and started an investigation.