On the morning of June 28, many netizens reported that the web version of the office software DingTalk had collapsed. “I couldn’t post any files in the morning. It was the most anxious time.” Some netizens said on Weibo. The topic “Ding Ding collapsed” quickly appeared in the hot search on Weibo.In this regard, Dingding’s official Weibo posted a message at 10:23 am saying that it is under full investigation.

Alibaba Cloud 6.18 Main Venue: Explosives at 10 o’clock every day for a limited time

However, some netizens replied: “In fact, it doesn’t matter if the repair is slower.” “Don’t troubleshoot, take a break, I feel sorry for you.”

At 12:47 noon, Dingding’s official Weibo stated that the fault has been resolved and various functions have been restored in batches. On this Weibo, netizens commented: “Why do you want to solve it? A good day is over at the moment you solve it.” 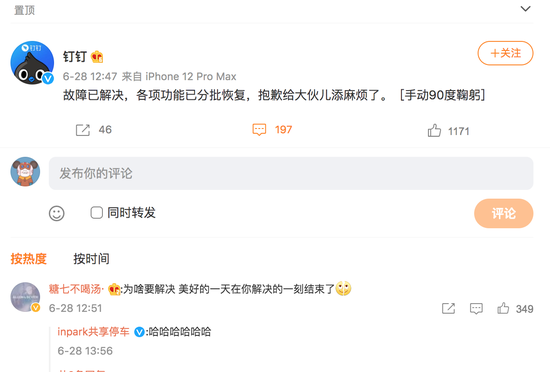 all functions are restored in batchescnBetaDingding: The fault is resolvedlatest newsnetizens: A good day is over
0 comment
0
FacebookTwitterPinterestEmail
previous post

Department of Development joins hands with Shopee to...

Organizing a campaign for the 3rd anniversary of...

Up to 20% of German institutional funds can...

February 21, 2021
We use cookies on our website to give you the most relevant experience by remembering your preferences and repeat visits. By clicking “Accept All”, you consent to the use of ALL the cookies. However, you may visit "Cookie Settings" to provide a controlled consent.
Cookie SettingsAccept All
Manage consent