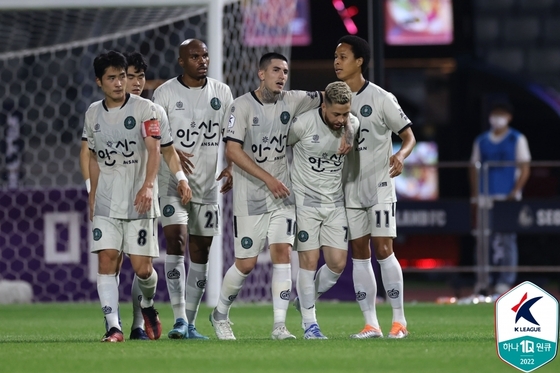 The professional soccer K League 2 Ansan Greeners managed to escape from the bottom of the table with their first consecutive win of the season.

Ansan won the Hana OneQ K League 2 2022 round 22 away match against Seoul E-Land held at Mokdong Sports Complex in Seoul on the 22nd, 3-2 after a melee game.

With this victory, Ansan recorded their winning streak following a 3-0 win over Bucheon FC on the 13th. This is Ansan’s first consecutive win this season.

For Ansan, Song Jin-gyu scored multiple goals in the 13th and 32nd minutes of the first half, and Duarte scored the winning goal in the 32nd minute of the second half when the score was 2-2. Seoul E-Land pursued with goals from Tsubasa in the 25th minute and Kadenasi in the 27th minute in the second half, but the defense collapsed.

Chungnam Asan and Gyeongnam drew without a goal.