——Interview with Yuan Yue, Yale World Scholar and Chairman of the Board of Directors

Recently, Yang Jiechi, member of the Political Bureau of the CPC Central Committee and director of the Office of the Central Committee’s Foreign Affairs Commission, met with Sullivan, National Security Affairs Assistant to the President of the United States, in Zurich, Switzerland. Comments. During the talks, the two sides agreed to take action to implement the spirit of the call between the two heads of state on September 10, and work together to push Sino-US relations back on the right track of healthy and stable development.

In recent years, frictions between China and the United States have continued. In an exclusive interview with China News Service, Horizon’s chairman Yuan Yue said that although there are differences in values, because of this, China and the United States need more dialogue and coordination, and make good use of the complementary advantages generated by differences. Contribute to the building of a community with a shared future for mankind. 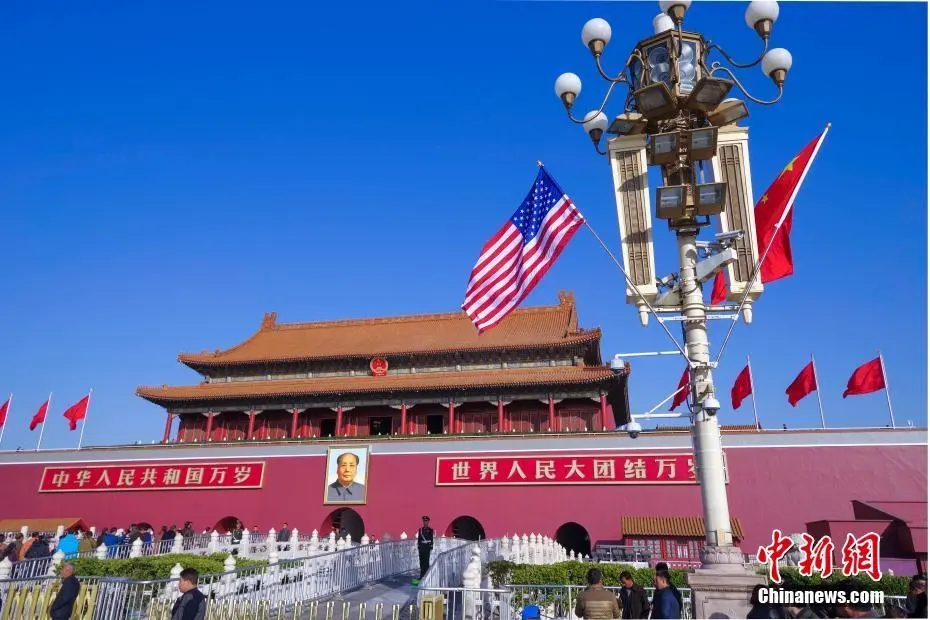 Data map: The national flags of China and the United States were hung in front of Tiananmen Square in Beijing.Photo by China News Agency reporter Jia Tianyong

The resurgence of “value diplomacy”

“Values ​​diplomacy” is not a new concept. As early as the establishment of the Soviet Union, the Cold War between the U.S. and the Soviet Union, the rebalancing of Asia and the proposal of the Indo-Pacific strategy, this kind of diplomatic means that formulates foreign policies in accordance with ideology and political systems, which in turn affects the values ​​of other countries’ nationals, appeared, and once led to some Relations between countries are strained.

“In recent years, the leadership of some Western countries has reappeared similar diplomatic propositions.” Yuan Yue said that according to public opinion surveys in European and American countries, in recent years, the overall preference for China in European and American countries has declined significantly. One of the important reasons is Western politics. The mentality of “expectation and frustration” appeared in the development of China by experts, media, and academic elites.

“If there is no difference in core values, Western countries and their people may not have too much sense of crisis about China’s rapid development.”

However, values ​​and their differences are not the only determinants of the orientation of state-to-state diplomatic relations. “The cause of the First World War was not a difference in values. During World War II, Britain and the United States could also fight side by side with the Soviet Union.” Yuan Yue said, this can also be seen in today’s international diplomatic affairs.

American scholar Frederick Watkins mentioned in his new book “Western Political Tradition: The Development of Modern Liberalism” that the concept of “justice” teaches people to measure the equal rights of others, thereby restricting their own requirements, and therefore enabling Rational people seek common ground while reserving differences. The function of the state is to seek a rational balance among the eternally opposed forces in order to achieve the goal of “justice”.

Looking at the whole world, peaceful coexistence and non-discrimination should be the accepted rules of exchanges between countries. All countries jointly deal with global problems, enjoy the rights granted by international laws and regulations, and fulfill their due obligations. But in reality, the global situation is complex and changeable, and there are constant frictions between countries. In Yuan Yue’s view, the reason is that some countries place their own interests above this rule, and the United States is the most prominent example.

“A country’s role in diplomacy should not be differentiated by its strength. China is not a destroyer of international rules, but a defender.” Yuan Yue said, “and the United States regards the rules agreed with its allies as its identification. Part of the rules of international law; for the rules set by international organizations and agreements that have not joined, it also regards itself as the interpreter and implementer of the rules, and acts as a “world police”. This is an out-and-out “double standard” behavior. .”

Seeking the “combination” of historical progress from “conflict”

Due to the clarity of the process of multi-polarization of the world structure and its own development needs, China has gradually changed its original “defensive” strategy into an “active and enterprising” strategy. With the rise of China, in recent years, the “China threat theory” has also begun to circulate in a few Western countries, but Yuan Yue does not agree with this statement.

Yuan Yue said: “In fact, China is looking for a basis within the established international law framework for existing major issues, and using existing rules to defend its own interests, but the way of defending is clearer and more direct than other countries.”

French political theorist and economist Pierre-Joseph Proudhon once said that “conflict” is a tool to promote historical progress, and the goal of history is to seek the ultimate “combination.” This relationship applies not only to the state and the individual, but also to the relationship between the state and the association.

According to Proudhon, the purpose of history is to skillfully deal with the differences between individuals and groups whose interests and functions are increasingly divided, so that each different factor can make the greatest contribution to the increasingly complex social life.

The adjustment of the behavioral pattern of international interaction is precisely the adaptive challenge China has brought to the United States. Yuan Yue said that China’s diplomacy, trade strategies, and security propositions have also changed, and they need to match the developing economic, technological, and security interests, and there are more propositions that need to be expressed, the boundaries of interests, and the protection of interests. Actions must also be stated.

“The difference in values ​​is not necessarily a bad thing. Many people think that Sino-US friction is inevitable and there will be many specific competition scenarios, but it is not the case.” Yuan Yue said that societies dominated by different values ​​are important components of the “global village.” Part of it can contribute to the construction of a “community with a shared future for mankind.” Countries should use differences to generate complementary advantages, and increase opportunities for contact, communication and dialogue on the premise of mutual respect.

In Yuan Yue’s view, China is trying to break through the long-term compression of the development space of developing countries in the world. This is not only related to China’s interests, but also to the interests of emerging economies and developing countries around the world, and even many developed countries. This will also be the future development trend of the world. “Many Western countries may not be suitable for adopting China’s anti-epidemic model, and China’s soil is not suitable for the growth of Western political operation mechanisms. But whether it is climate change, nuclear non-proliferation, or helping the global anti-epidemic, poverty alleviation and development, or even ensuring a global network Security and military security require the joint efforts of all countries.” Yuan Yue said that because of different values, countries need to have dialogue, coordination, and set healthy interaction rules. (over)

About 100 contacts related to 5 people infected...

Meteorology reveals that the upper Thailand is cold...

[정치]Democrats repeatedly ponder over the disposition of...

[정치]President Moon, meeting with the representatives of...