Democratic Party presidential candidate Lee Jae-myung (left) listens to a nurse’s remarks during a meeting with young nurses held at the Bogu Nyeo-gwan of Ewha Womans University Seoul Hospital in Gangseo-gu, Seoul on the morning of the 17th. People’s Power Presidential Candidate Yoon Seok-yeol (right) is watching a video wearing a Level D protective suit at a meeting with nurses responding to the Corona crisis at the Korean Nurses Association in Jung-gu, Seoul on the afternoon of the 11th. Yonhap News Agency Promotion FoundationDemocratic Party candidate Lee Jae-myung and People’s Strength candidate Yoon Seok-yeol announced that they were pushing for the enactment of a ‘nursing law’, and the bill rose to the surface again.

There was an immediate response from the nursing community, but the medical community still seems to be against it.

Candidate Jae-myung Lee opened the door to the enactment of the ‘Nursing Act’ on his Facebook page on the 11th with the words, “Now, I will protect the nurses who always stand by the people.”

On the same day, Candidate Seok-Yeol Yoon also held a meeting with the Korean Nursing Association and promised to enact the law, saying, “I will do my best to improve the nursing work environment.”

Earlier, on the 3rd, a petition for enactment of the Nursing Act was also published in the Blue House National Petition.

The petitioner appealed that the nurses were leaving the field due to the absence of the law, saying, “There is no nursing law that can be a standard for work boundaries or roles in the workplace of 7 out of 10 medical professionals.” The petition received more than 200,000 signatures within a week, drawing attention.

A law enacted in 1951… Voices for system improvement continue 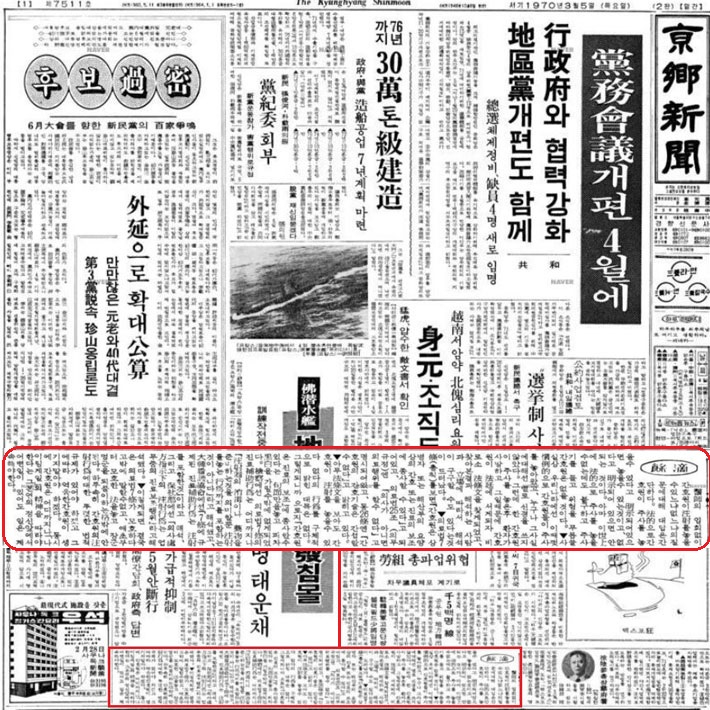 According to the Kyunghyang Shinmun on March 5, 1970, an article criticizing the ambiguous provisions of the Medical Law at the time was reported. Naver News Library CaptureThe name of the domestic medical law was changed to the medical law in 1962 after conforming to the framework of the national medical law enacted in 1951. However, it did not change much after that, and the need for social change and institutional supplementation was constantly raised.

The debate over legislation began in 1970. Ms. Kim was given an injection by a nurse who received a doctor’s prescription, and she died of shock.

At that time, Kim had to stand in court on charges of ‘violation of medical law and negligent manslaughter’ for injecting without the presence of a doctor. Nurses across the country protested all at once, and the debate heated up over ambiguous legal provisions such as ‘assistant for treatment’ and ‘you cannot perform medical treatment without a doctor’.

The content of ‘assistance for medical treatment’ is also clearly stated in the current law. According to Article 2 (Medical Personnel) of the National Legislation Information Center of the Ministry of Legislation, “Nurse is an assistant to medical care performed under the guidance of doctors, dentists, and oriental medicine doctors”.

In the National Assembly in 2005, Rep. Kim Seon-mi of the Uri Party and Rep. Park Chan-suk of the Grand National Party, respectively, proposed and discussed the ‘Nursing Judiciary Act’, but it was canceled due to opposition from the medical community at the time.

Since then, the Korean Nursing Association (hereinafter referred to as the Korea Association) has launched a ‘one million signature campaign for enactment of the Nursing Act’ since July 2013, and in 2019, Rep. ‘ was proposed. At that time, the bill was scrapped due to the expiration of the term of the National Assembly due to opposition from the medical community and other bills. 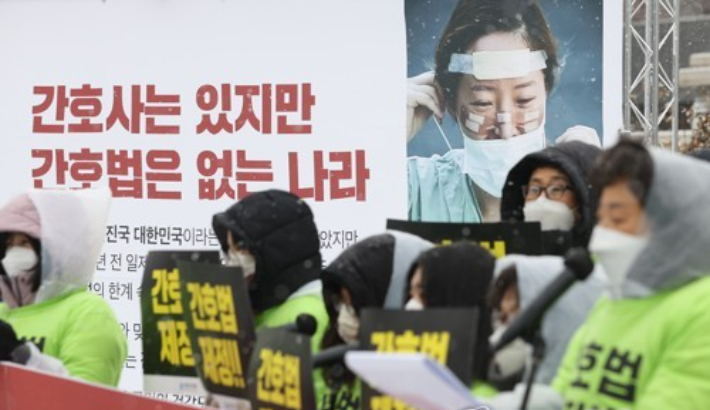 The Korean Nursing Association is holding a ‘Demand Rally for Enactment of the Nursing Act and the Elimination of Illegal Treatment and Illegal Medical Institutions’ in front of the National Assembly in Yeouido, Seoul on the morning of January 19. yunhap newsThe spark of discussion about enacting the nursing law spread again last year. Rep. Kim Min-seok of the Democratic Party of Korea and Seo Jeong-suk of the People’s Strength, who chaired the Health and Welfare Committee, respectively, proposed the Nursing Bill, and the People’s Party, Rep. Choi Yeon-sook, proposed the Nursing and Midwifery Act.

The main gist of the law is △Establish a comprehensive nursing plan every five years and conduct a survey on nurses, etc. every three years △Establish and support national and local government policies for supply and demand of nursing personnel and working environment △Support for nursing personnel by region Center establishment and operation △ Mandatory investigation and education to prevent human rights violations.

Contrary to the current law centered on doctors and medical institutions, nurses are active not only in medical institutions, but also in various environments such as schools and welfare facilities for the elderly. Therefore, it is the position that a new vessel called the Nursing Act is needed to integrate and manage the 90 nursing laws, including the Industrial Safety and Health Act, the School Health Act, and the Elderly Welfare Act.

In a phone call with CBS Nocut News, an incumbent nurse, Ms. Lee, said, “It is not only beneficial to us.” “If you see 10 patients and then see 5 patients, you can go to see them two or three times. The advantage will be that the quality will be much higher,” he said.

In this regard, Park Jun-yong, head of the National Nursing College Student Nursing Law Emergency Countermeasure Headquarters, said, “The main body that has to come up with an agreement on the content to be presented to the National Assembly Health and Welfare Committee is the Ministry of Health and Welfare within the administration. I hope it goes well.”

Medical Association “regression of the medical system” vs. “The medical law is what it is” 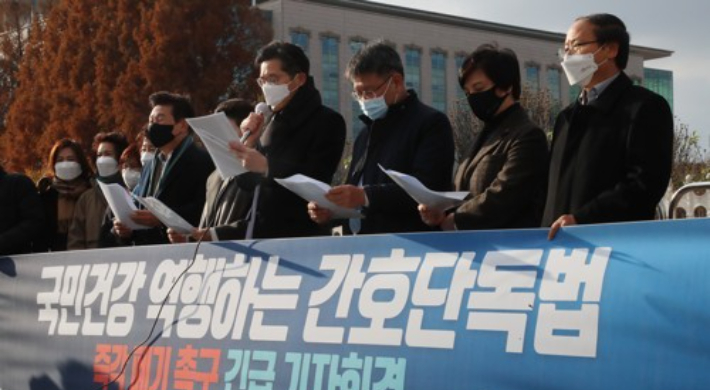 In a statement released on the 7th, the Korean Society of Orthopedic Surgeons said, “It is not a ‘nursing law’ that can cause division in the medical world, but a support bill and policy that can coexist with all medical personnel who are victims of poor environment is urgent.” It is questionable whether the Nursing Act, which focuses on improving the working environment of nurses and promotes division and conflict among medical professionals, is for the sake of public health as a bill for specific occupations only.”

The Korean Medical Association also said, “The Nursing Act has serious problems that shake the foundation of the medical system.” It is an evil method that is life-threatening.”

Park Soo-hyeon, a spokesperson for the Korean Medical Association, told CBS Nocut News, “Doctors are constantly talking about improving the working environment, human rights issues, and patient management (which the nursing community is talking about),” he said. It is a matter that is included in the Human Resources Support Act as well.”

Spokesperson Park said, “Existing medical practices are not something that one doctor or nurse can do.” “Because it is ‘medical’, it should be regulated within the overall scope of the Medical Act.” He added.

He continued, “The biggest problem with the Nursing Act is that certain professions are going to do more than what was originally stipulated by the license,” he said. There will be parts where you will receive (medical) actions that you can only do alone,” he said. 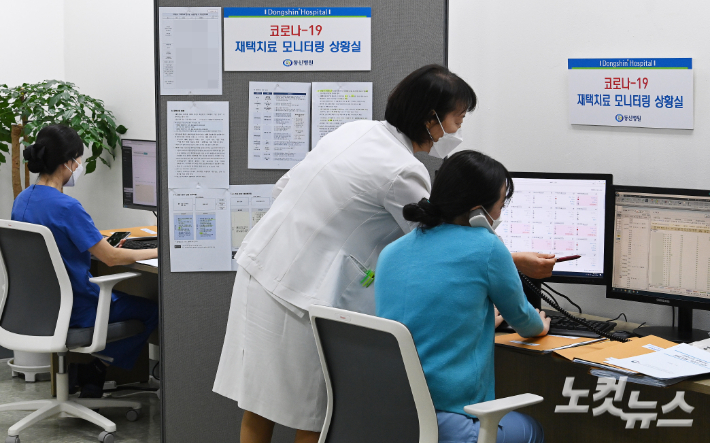 On December 2, last year, when new confirmed cases of COVID-19 were rapidly increasing, at Dongshin Hospital in Seodaemun-gu, Seoul, a home treatment management medical institution, nurses checked the status of patients undergoing home treatment, such as body temperature, blood pressure, and oxygen saturation, through a phone call, and registered them in the home treatment system. have. The photo above is not directly related to the article below. Reporter Park Jong-minOn the other hand, Professor Yoon-hee Kang of the Department of Nursing at Ewha Womans University refuted, saying, “The content currently asserted, including the position of the KCC, is contained in the existing medical law.”

Professor Kang continued, “It is about moving everything related to nursing into the Nursing Act as a whole.

Professor Kim Jin-hyeon of Seoul National University’s College of Nursing also said, “If you see a lot of actions that nurses actually perform in hospitals, whenever a doctor argues, it becomes a legal problem.” pointed out

“Even when doctors went on strike amid the COVID-19 pandemic, someone had to cover an emergency at the scene,” he said.

He continued, “The purpose of the nursing law is to separate the roles of doctors and nurses,” he said.

In this regard, the KSA also said, “It is not at all true that the Nursing Act will infringe on doctors’ own work area if enacted.” It’s for clarity.”