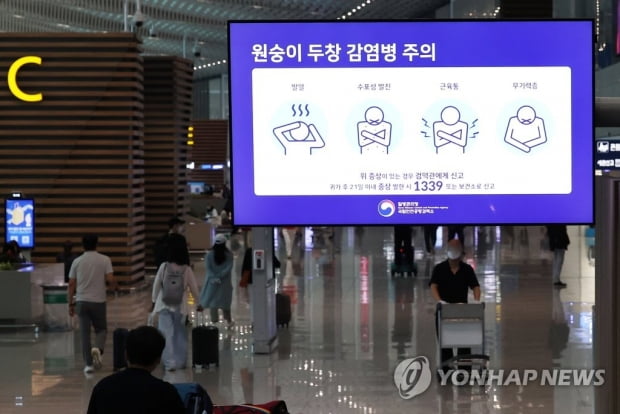 It was found that the first confirmed case of monkey pox in Korea passed the quarantine checkpoint despite showing symptoms when entering the country through the airport.

As a result of the epidemiological investigation, at the time of entry, Mr. A had a mild fever of 37.0 degrees, sore throat, asthenia (weakness), fatigue, etc. didn’t

Foreigner B, who was classified as a doctor patient (suspect) on the same day and tested negative for monkey pox after entering the country on the same day, also marked ‘no symptoms’ on the health status questionnaire at the time of entry and exited the quarantine area and was quarantined only the next day. Criticism of the system is raised.

The quarantine authorities announced on the 22nd that they would increase the self-report rate of inbound travelers by strengthening the guidance on using SMS text messages and quarantine information pre-entry system for inbound and outbound travelers through a briefing after the outbreak of a confirmed case on the 22nd.

On the other hand, the quarantine authorities re-emphasized the position that “excessive tension or excessive concern is unnecessary” in relation to the possibility of community transmission of monkey pox.

However, the Korea Centers for Disease Control and Prevention (KCDC) said, “If you enter the country during the incubation period or do not recognize symptoms during the quarantine stage, infected patients may come out of the community in the future.” .

“We urge people visiting or traveling to the affected countries to observe and report personal hygiene rules, and to actively monitor and report suspected patients from the medical community,” he added.

Regarding the possibility of community transmission, Professor Eom Joong-sik of Gachon University Gil Hospital (Department of Infectious Diseases) appeared on CBS Radio’s ‘Kim Hyun-jung’s News Show’ on the same day and said, “It cannot be ruled out that there is no 100%, but it is judged that there is little chance of community influx and epidemic. are doing,” he said.

Professor Eom said, “Most of the diseases accompanying a rash and fever are infectious diseases that need to be reported.” explained.

Regarding the possibility of infection through droplets, he said, “In the case of a patient who has progressed to the form of systemic infection, the virus may come out in a relatively large droplet (saliva), and exposure to such droplets can lead to infection.” It is not a droplet infection like 19, that is, it is spread even from a small distance,” he emphasized.

It is also pointed out that social stigma on the confirmed cases should be cautious as it may increase the number of hidden infections.

Jeong Jae-hoon, a professor at Gachon University’s School of Medicine (Department of Preventive Medicine), posted on his Facebook the day before, “Monkey pox is concerned about social stigma against confirmed patients, and this can delay the detection of infected persons or make diagnosis difficult, thereby threatening society even more.” “We must find a level of response that can protect the rights of individuals while ensuring the safety of society,” he wrote.

Regarding the risk of transmission of monkey pox, Professor Jeong said, “It is expected that overseas inflows will continue and cases of secondary and tertiary transmission will be found in Korea. negative about it.”

Professor Jung pointed out that ▲ DNA virus is a pathogen ▲ has a longer incubation period compared to Corona 19 ▲ and that direct contact is the main route of transmission unlike COVID-19. , the speed of propagation itself is expected to be slower than that of COVID-19.”

Meanwhile, the quarantine authorities explained that the country’s first monkey pox patient, who was confirmed the day before, was receiving continuous treatment at Incheon Medical Center.

Read Also  Kannada television Actress Soujanya commits Suicide in suicide letter founds actress in mental frustruation | Suicide note stating that no one was responsible for his death, as he had committed suicide

The Korea Centers for Disease Control and Prevention (KCDC) said, “According to the guidelines, patients with confirmed monkey pox are treated at the designated inpatient treatment bed by the city and province. He was transferred to the Incheon Medical Center, a treatment bed, and continues to receive treatment at the first assigned bed in consideration of the minimization of movement.”

According to the Korea Centers for Disease Control and Prevention (KCDC), 49 people have been in contact with the confirmed case, and no additional contacts have been identified until today.

The Korea Centers for Disease Control and Prevention (KCDC) plans to introduce 500 doses of tecovirimat, a treatment for monkey pox, into Korea within the next month, and has secured 100 doses of antiviral treatments such as cidofovir and vaccinia immunoglobulin that can be used before this treatment is introduced. said again.