Even though Hwang Seon-Hong-Ho was eliminated in the quarterfinals, Cho Young-Wook, U-23 Asian Cup top scorer 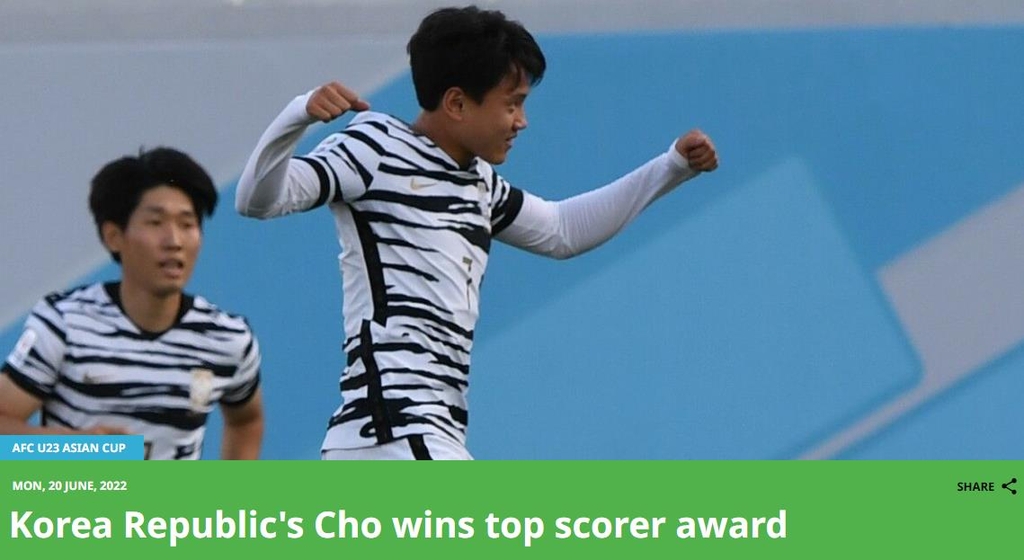 (Seoul = Yonhap News) Reporter Bae Jin-nam = Although Korea was eliminated in the quarterfinals of the 2022 Asian Football Federation (AFC) Under-23 (U-23) Asian Cup, striker Jo Young-wook (23, FC Seoul) rose to the top scorer of the tournament.

AFC announced on the 20th that Cho Young-wook was awarded the top scorer of the tournament.

Jo Young-wook recorded three goals and one assist in this tournament.

In the first group match against Malaysia (4-1 win), he scored two goals as a substitute in the 21st minute of the second half, and in the second leg (1-1 draw) with Vietnam, he was on the bench and entered the second half and scored the first goal.

In this tournament, there were five players including Cho Young-wook who scored three goals. Among them, Cho Young-wook, who had the shortest appearance time, took the top scorer.

The Korean national team, led by coach Hwang Seon-hong, tried to win the championship for the second time in a row, but lost to Japan 0-3 in the quarterfinals and had to pack up early.

After returning to his team, Cho Young-wook scored the winning goal in the K-League 1 ‘Super Match’ against rival Suwon Samsung held on the 19th to lead Seoul to a 1-0 victory. Park Ji-won “Successful in attending NATO for the former president… ‘No-look handshake’ is not a humiliation”
Posted onJune 30, 2022June 30, 2022
Menu