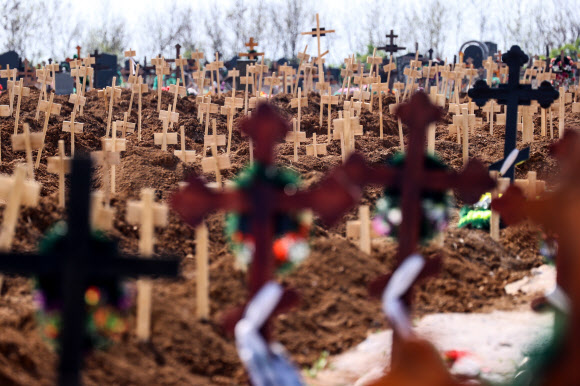 ▲ New graves with wooden crosses can be seen in a cemetery in Mariupol, a port city in southeastern Ukraine. 2022.4.26 TAS Yonhap News

Another mass burial site has been captured near Mariupol, a port city in southeastern Ukraine, where up to 20,000 civilians are suspected to have been killed, CNN reported on the 26th (local time).

According to the report, Mariupol Mayor Vadim Wojchenko announced on the same day that a mass burial site was found in Staricream Village, about 8 km from Mariupol, based on photos taken by US satellite image company Planet Labs.

According to the Mariupol city council, pits were discovered on the 24th of last month after the Russian army occupied the village, and at that time they were about 60 to 70 meters in length. In the photo on the 7th, it was confirmed that some pits were covered with soil, and the size of the burial site was larger. Then, on the 24th, a new pit was added, and the total length was increased to more than 200m, the city council explained.

▲ A worker makes new graves at a cemetery in Mariupol, a port city in southeastern Ukraine. 2022.4.26 TAS Yonhap News

The discovery of the presumed mass burial site is the third following the previously discovered piles of pits near the cemeteries in Manhusi and Vinoradne, villages near Mariupol.

Mayor Wojchenko reiterated Ukraine’s estimates that about 20,000 people in Mariupol have lost their lives since the invasion of Russia.

Russian forces have already announced that they have seized Mariupol, but fighting is said to have continued in some areas. “Russian forces are attacking our fortress Azoustal (Azovstal),” said Mayor Wojchenko.

The Azoustal Works, the last stronghold of Ukrainian resistance in Mariupol, is completely isolated. “There is running out of food and little water to drink inside,” said Mayor Wojchenko, adding that “this is a humanitarian disaster”.