Everyone has read enough analysis articles about the setting sun of the American Empire. When Harvard University historian Niall Ferguson was interviewed by Nikkei to talk about the 20-year review of 9.11, he completely denied that “the United States is in decline, and China is declining.” On the rise, the Asian century has begun.”

I can’t see China’s development, and Western scholars have thrown out the theory of China’s collapse. (AP picture)

Ferguson used to be optimistic about China. At the critical moment when the financial tsunami swept the world in 2008, he advocated the “Chimerica” ​​cooperation model to save the world. However, the premise is that China needs to integrate into the Western order, and it is about freedom, democracy, economy and politics. Universal value, the most rational choice.

China did not increase the cooperation of the “Sino-American Community.” Since then, China and the United States have decoupled and become strategic opponents. The Sino-U.S. contest is inevitable. This Harvard scholar is optimistic about the undefeated United States. According to mainstream Western views, he said: “Like the Soviet Union, China is an unstable regime with concentrated power, lack of rule of law, and frequent corruption. All of these are Produce predictable results and eventually lead to the collapse of (China’s) economic model.” This is more than that, Ferguson pointed out, China “is collapsing. The demographic structure is terrible, the debt dynamics are also terrible, and China relies on large-scale surveillance and rude propaganda. To maintain its legitimacy.”

The above are all familiar “China collapse theory”, but he puts forward a new point: “When a leader announces how much time a child spends on computer games, you know the ending is right in front of you. Therefore, I bet that in the next 20 years In 2010, there will be a crisis in the Chinese system, and at the same time, the United States will re-emerge, mainly based on immigration.”

The Chinese authorities regulated internet use last month. For minors under the age of 18, all online game companies can only provide one-hour service on Friday, Saturday, Sunday and statutory holidays from 8 to 9 pm every day. Ferguson builds an argument based on this. It is logically fair. The premise is that Chinese children love freedom, and the state does the parents and children to plan the unfree places in the details of life, who loves it? In this way, more Chinese talents seek to emigrate abroad. Since American technological achievements rely on the introduction of talents, the United States is the most popular place for immigrants: the conclusion is “As long as the United States immigrates talents and introduces talents, it wins. It wins artificial intelligence, it wins quantum computing, just because it has talents, it has global Human resources, and China only has local talents.” 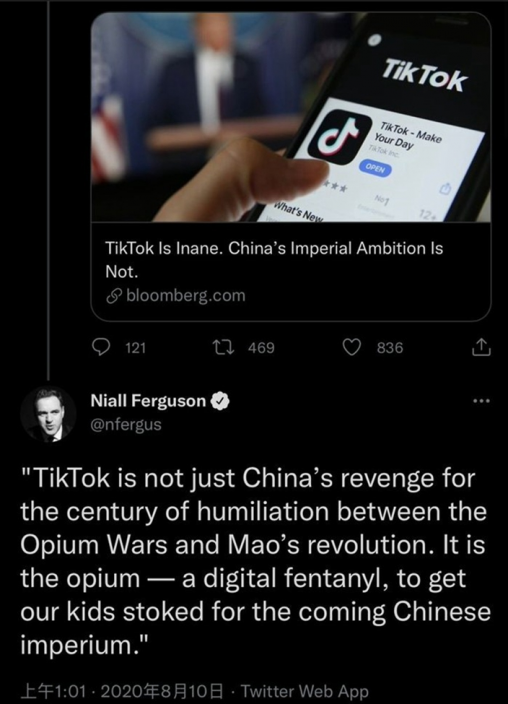 However, I can accept Ferguson’s bet, because Ferguson’s argument is not even believed by him, and it is more inconsistent. He has a “double standard” attitude towards indulging in Internet gadgets. In August 2020, the United States prepared to ban TakTok. Facebook founder Zuckerberg referred to TikTok as a brainwashing “viral video”. The then US President Trump suspected that TikTok infringed on privacy and national security. Ferguson’s insights are the most creative. He said on Twitter: “TikTok is not only China’s revenge for a century of humiliation, from the Opium War to the Mao Zedong Revolution, but also a dose of digital opium that paralyzes children and embraces joyfully. The Chinese Empire is coming soon.” Ferguson revealed that he was not satisfied with his 8-year-old son’s curiosity and fascination with TikTok.

TikTok is one of the most popular social platforms in the world. It is estimated that more than one-third of Americans, that is, more than 100 million active users of TikTok, also build hobbies for many creative young people. Obviously, Ferguson regards TikTok made in China as “opium” and asks to be excluded from the United States and even Western countries because of the principle of ideology first.

American leaders even ban TikTok. Will the United States be a multicultural society that attracts immigrants? In the final analysis, Ferguson’s heart cannot conceal the worries of the Western system based on capital interests: when the people-oriented China model is successfully established, it will have an unpredictable impact on the European and American order. However, the hope that the game can create a rainbow for the United States, this idea is also too curious.

Kovid booster dose for people over 65 and...

The Japanese Prime Minister’s Election… Out of the...

Breast milk for children, urine for himself; The...

The Warsaw Conference on the Protection of Children:...

March 14, 2021
We use cookies on our website to give you the most relevant experience by remembering your preferences and repeat visits. By clicking “Accept All”, you consent to the use of ALL the cookies. However, you may visit "Cookie Settings" to provide a controlled consent.
Cookie SettingsAccept All
Manage consent