Focus on high-quality development｜Shennongjia, Xingshan and other tourist attractions in western Hubei will be connected to high-speed rail-China Daily 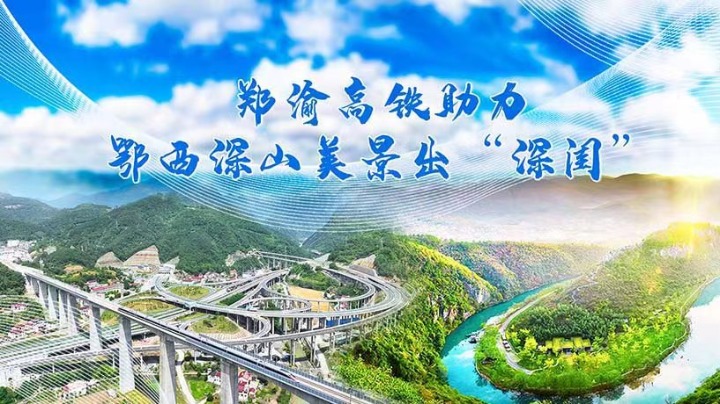 Xinhuanet, Wuhan, June 19th: Focus on high-quality development｜Shennongjia, Xingshan and other tourist attractions in western Hubei will be connected to high-speed rail

Passing through the “Roof of Central China” Shennongjia, through the major mountains in western Hubei, the last section of the Zheng-Chongqing high-speed rail line – Xiangyang east to Wanzhou north section will be put into operation soon. It is difficult to see the beautiful scenery in the deep mountains. The Zheng-Chongqing high-speed railway fills the gaps in the railways of Nanzhang, Baokang, Shennongjia, Xingshan and other places in the mountainous areas of western Hubei, connecting many tourist resources along the line, and radiating their charm to the Chengdu-Chongqing metropolitan area at a speed of 350 kilometers per hour. , the central urban agglomeration and even the whole country. Since then, the good mountains and good waters in western Hubei will welcome more tourists, drive the prosperity of related industries, and help the poor rural areas to be transformed into mountains of gold and silver.

“The location of Shennongjia Station is unique because it is the only piece of flat land.” Li Xiaobo, deputy commander of the Xingshan Headquarters of Wujiu Keshuo Hubei Branch, highlighted the topographical features of Shennongjia.

Shennongjia is the highest peak in Central China raised by the Qinba Mountains stretching 3,000 miles in the border area of ​​Hubei and Chongqing. The highest altitude is 3106.2 meters. It is named after Emperor Yan Shennong’s setting up to collect herbs here, and it is mysteriously veiled by the legend of the savages. Many people want to come to appreciate the beauty and find out.

After the Zheng-Chongqing high-speed rail line was opened to traffic, Shennongjia was integrated into the national high-speed rail network, entering the “two-hour high-speed rail circle” to Wuhan, Chongqing, and Zhengzhou, and only four hours to Beijing.

“At present, there are more than 7,100 direct employees and more than 20,000 indirect employees in Shennongjia tourism.” Zhang Shoudong, director of the Shennongjia Forestry Culture and Tourism Bureau, said that after the opening of the high-speed rail, Shennongjia and other places have become part of the “one-day tour” tourism circle in Hubei and Henan. Entering the era of great transportation, great dividends and great cooperation, the development of Shennongjia faces an important period of strategic opportunities.

It is estimated that after the opening of the high-speed railway, 18.709 million tourists will travel through Shennongjia Station every year. In order to receive a large number of tourists, the local area has made full plans.

Zhengyu High-speed Railway Badong Station is located within the Shennong River, a national 5A-level scenic spot. The design of the station building has distinctive local characteristics. The color is mainly the wood red and gray tile color of the traditional Tujia architecture. The square in front of the station is equipped with sculptures such as Xiajiang Tracker, Linjun Baren, and Kou Zhun persuading farmers. When tourists arrive at Padang by high-speed rail, they can feel the strong local cultural characteristics of Padang.

“The ‘Shuangshen’ tourist railway that is being planned and constructed will connect the two 5A-level scenic spots of Shennongxi and Shennongjia.” Xiang Yuanqing, deputy director of the Development and Reform Bureau of Badong County, revealed that in the future, the exchanges between various scenic spots in western Hubei will be more convenient.

The picture shows the aerial photography of Zhaojun Village Scenic Spot in Xingshan County, taken by Li Yang from Xinhuanet

It only takes 15 minutes to get to Xingshan Station by high-speed rail from Badong Station.

Xingshan County is the hometown of Zhaojun, with Bachu on the top and Jingjiang on the bottom. It has rich tourism resources represented by the Three Gorges Xiangxi and Zhaojun Culture. It is a pearl in the mountains in eastern Chongqing and western Hubei.

Entering the “350” high-speed rail era, a number of scenic spots in Xingshan are planning to upgrade their files.

“We plan to build ‘Zhaojun Village’ into a national 5A-level scenic spot in three years.” Xingshan Zhaojun Village Scenic Spot was built on the basis of the site of Zhaojun Courtyard in Song Dynasty. Relics, natural ecological landscape of ancient Han Dynasty, Han Dynasty court culture and local characteristic culture are currently a national 4A-level scenic spot. Li Ying, chairman and general manager of Zhaojun Tourism and Culture Company, introduced that the scenic spot is planning to build a folk culture street, water landscape, Zhaojun Huansha site, research base and other attractions and supporting facilities, and strive to build a 5A scenic spot.

The picture shows the test train of the Xiangwan section of the Zhengyu high-speed railway running in Baokang County.

The Zheng-Chongqing high-speed railway has newly built two stations in Nanzhang and Baokang County in Xiangyang City. As mountainous counties, the two places have long been unbalanced with the economic development of the Xiangyang Plain. The opening of the high-speed rail has brought an excellent opportunity for the local to revitalize natural resources, vigorously develop the cultural tourism economy, and embark on the road of high-quality development.

“The ecotourism in the mountainous area of ​​Nan (Zhang) Bao (Kang) Valley (City) in Xiangyang is quite distinctive. Through the connection of Zhengyu high-speed railway, the ecotourism in Nanbao Valley can be organically combined with the ecotourism areas in Chengyu and Enshi.” Xiangyang Liu Chao, deputy director of the Municipal Bureau of Culture and Tourism, said that the governments and cultural and tourism departments of Xiangyang City, Nanzhang County and Baokang County attach great importance to seizing the opportunities of the high-speed rail era, and actively carry out cultural tourism and other related industry plans, and have done a good job in all aspects. ready.

“The ‘Jinnan Zhang’ high-speed rail town project has planned four areas: high-speed rail supporting area, commercial business area, livable living area, and cultural, tourism and health care area. It will form a cultural tourism and happy life characteristic town integrating business, business, sports, culture, leisure, entertainment, residence and health care functions.” Li Taili, a businessman from Jiangxi, said that Nanzhang’s good natural ecological environment and business The policy attracted him to invest. The opening of the high-speed rail is conducive to the accumulation of people flow and developed logistics. He is full of confidence in the development prospects of the project.

Baokang County has a vast forest area, beautiful peaks, Wudaoxia, Hengchong, Jiuluzhai, Huanglongguan, Yaozhi River and other scenic spots with their own characteristics, which are called the “back garden” of Xiangyang people.

The news that the family of a missing elementary school student who said they were going to live for a month was not apprehended… search expansion synthesis
Posted onJune 26, 2022June 26, 2022
Menu