Former CEO of Good People arrested after 3 months of hiding 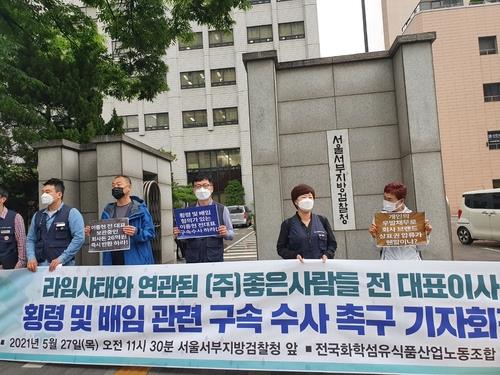 (Seoul = Yonhap News) Reporter Bo-ram Oh = Former CEO of underwear company ‘Good People’ Lee Jong-hyeon, who is accused of stealing tens of billions of won from the company, was caught by the police after three months of hiding.

According to the police on the 20th, the Seoul Metropolitan Police Agency’s financial crime investigation team arrested and investigated former CEO Lee on the 18th on charges such as embezzlement under the Act on Aggravated Punishment for Specific Economic Crimes. An arrest warrant was also requested on the same day.

The police initially estimated the embezzlement amount of former CEO Lee to be about 30 billion won, but it is reported that the amount of damage is expected to increase during the investigation process.

The police have been investigating Lee since March of last year after catching the allegation of embezzlement.

Apart from this police investigation, the Good People branch of the National Chemical Fiber Union of the KCTU also filed a complaint with the prosecution in April last year on charges of embezzlement and breach of trust under the Special Police Act. It is alleged that former CEO Lee abused his authority and borrowed 3.65 billion won, and caused a large-scale contingent debt by signing a contract to guarantee the company jointly or to bear the debt.

Prosecutors investigated the case reported by the union and requested an arrest warrant for Lee in March of this year. However, the former CEO disappeared without appearing in the suspect’s interrogation (warrant substantive examination) before the arrest. At that time, the Seoul Western District Court issued an arrest warrant for former CEO Lee, who was wanted, stating that there is a risk of escape.

Read Also  ``Ahn Cheol-soo, chairman of the transfer of the presidency, and Kwon Young-se, vice chairman of the... Announced on the 13th
Facebook
Twitter
LinkedIn
Pinterest
Pocket
WhatsApp

Always pay yourself first Principles for Wealth from the book “The Richest Man in Babylon”
Posted onJuly 3, 2022July 3, 2022
Menu