The government decided to raise the social distancing step in the metropolitan area from step 1.5 to step 2 as the spread of the novel coronavirus infection (Corona 19) has recently increased. The time of application is from 0 o’clock on the 24th, Tuesday.

Prime Minister Jeong Sye-gyun held a meeting of the Central Disaster and Safety Countermeasure Headquarters for Corona 19 Response at the Seoul Government Complex on the afternoon of the 22nd and made such a decision.

At the meeting, the government determined that the third epidemic of Corona 19 was in full swing. Corona 19 spreads rapidly around the metropolitan area, leading to national spread.

The average number of domestic cases per day for the past week (15th to 21st) was 255.6. Of these, the number of people in the metropolitan area was 175.1, more than double the number of the previous week.

The script judged that it was necessary to quickly curb the spread of infection in consideration of the seriousness of the situation, preparation time, and SAT (December 3). Therefore, from 0 o’clock on the 24th to midnight on the 7th of the following month, the metropolitan area went from stage 1.5 to stage 2. In addition, the Honam region decided to upgrade the distance from step 1 to step 1.5. However, in the case of Jeonbuk, it was decided to implement step 1.5 from 0 o’clock on the 23rd. Gwangju is already in operation.

In the case of the Seoul metropolitan area, which is upgraded to the second stage of distancing, quarantine management for multi-use facilities is strengthened.

In the case of direct sales promotions such as door-to-door sales, the number of persons is limited to one per 8㎡ of facility area. Also, it cannot be operated after 9 pm. The provision of songs and food is also prohibited.

The singing practice center cannot be operated after 9 pm. The number of people is limited to 1 per 4㎡ of facility area, and food intake is prohibited. However, water or non-alcoholic beverages can be consumed.

The indoor standing performance hall will be closed after 9pm. Audience standing is prohibited, and the performance must be operated with seats arranged at least 1m apart. I can’t even eat.

In the case of restaurants, only packaging and delivery are allowed after 9 PM. All cafes that sell beverages, as well as franchised beverage shops, can only be packaged and delivered throughout business hours.

If the rules are not followed, the manager and operator of the facility must pay a fine of 3 million won or less, and users of 100,000 won or less. If a violation of the rules is detected at least once, the’immediate exit system’ (one strikeout system) is implemented, which prohibits collectively for the facility.

In the case of general management facilities,’restrictions on the number of users’ will be expanded. You cannot do high-risk activities, such as eating food. However, water or non-alcoholic beverages can be consumed.

Indoor sports facilities such as gyms, billiards and screen golf courses cannot be operated after 9 pm. No food intake is allowed, and the number of people is limited to one per 4㎡ of facility area.

In the case of wedding halls and funeral halls, only less than 100 people can enter.

In the case of the bathing business such as sauna and sauna, recreation room, and multi-room, eating and drinking is prohibited, and the number of people is limited to one per 8㎡ of facility area. 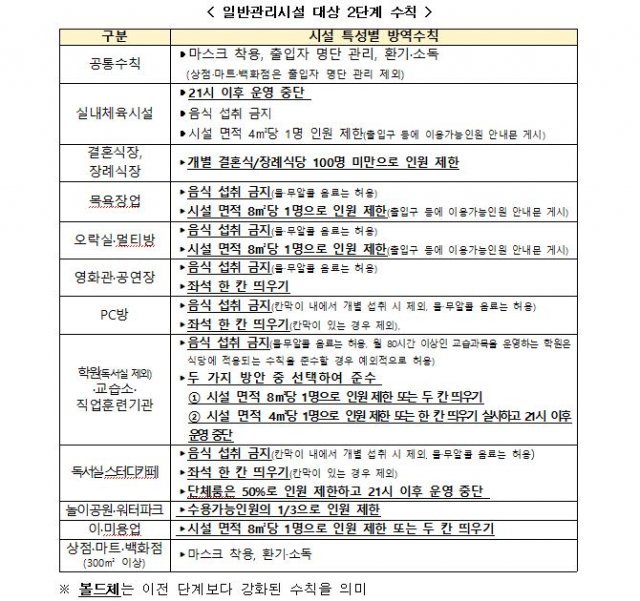 In the case of indoor multi-use facilities such as museums, libraries, and art museums that are not included in the priority/general management facilities, wearing a mask is mandatory.

In the case of social welfare facilities, quarantine measures such as restrictions on the number of facilities are strengthened to care for the vulnerable.

For exhibitions, fairs, and international conferences, the standard of less than 100 people does not apply. However, the number of people is limited to 1 per 4㎡ of area.

In the case of sports viewing, spectators are restricted to 10% of the maximum number of people per stadium.

In principle, the school attendance is based on 1/3 of the density (2/3 of the high school), but it is allowed to operate within a maximum of 2/3 through flexible academic management.

Religious activities are allowed to participate within 20% of the number of seats in the case of regular worship, mass, court, and rituals, but meetings and meals organized by religious facilities are prohibited. 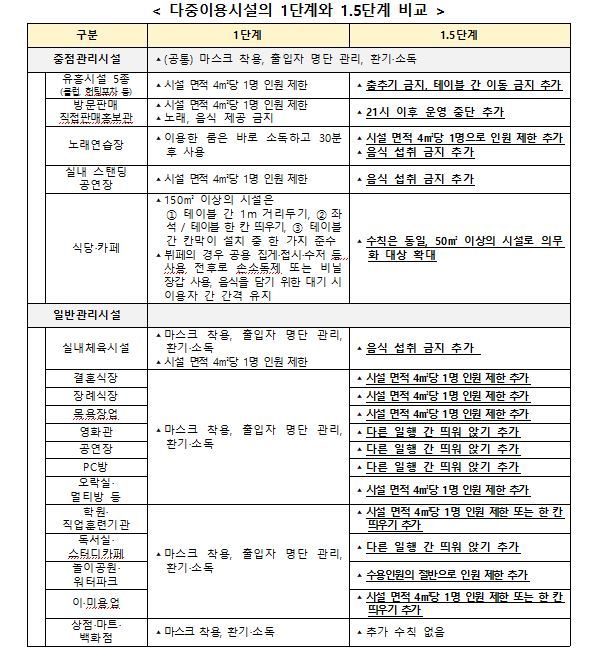 The Honam area, which is upgraded to step 1.5, is subject to additional rules such as restrictions on the number of users.

First, in the case of priority management facilities, the restrictions on the number of users are expanded, and high-risk activities such as’dancing in clubs’ and’prohibition of eating food in the singing practice area’ are prohibited.

For restaurants and cafés over 50m2, one of the following must be observed: 1m distance between tables, one seat/table space, and partitions between tables.

Direct sales promotion centers such as door-to-door sales will be closed after 9 pm. Dancing and moving between seats are prohibited in entertainment facilities.

In the case of singing practice, the number of people is limited to 1 per 4㎡ of facility area, and eating is prohibited. Even in the case of indoor standing concert halls, food is not allowed.

In the case of wedding halls, funeral halls, bathing halls, recreation rooms and multi-rooms, the number of people is limited to one per 4㎡ of facility area.

Movie theaters, performance halls, PC cafes, reading rooms, study cafes, etc. are required to have seats open between different parties. In the case of reading rooms and study cafes, the number of group rooms should be limited to 50%.

For academies (excluding reading rooms), classrooms, vocational training institutions, and barbering and beauty shops, the number of people must be limited to one per 4㎡ of facility area, or one space should be left.

In the case of amusement parks and water parks, it is limited to 50% of the capacity.

Close window
You recommended the articleFrom the 24th of the metropolitan area, the distance is raised to two stages… What’s different?Best Recommended News