Ga Se-yeon “Receive CCTV reports” Lee Jun-seok “If there is, disclose everything” 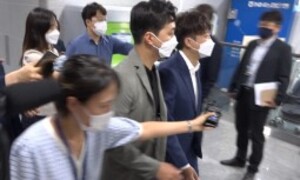 The People’s Power Central Ethics Committee announced on the 22nd that it would hold a meeting to discuss whether or not to take disciplinary action against Lee Jun-seok, the representative of the People’s Power, over allegations of sexual abuse and the controversy over teachers destroying evidence. In response, CEO Lee said that the warning was excessive, and he took the position that he could not accept any disciplinary action.

The Garosero Research Institute, which continues to expose CEO Lee’s suspicions, said that Lee Jun-seok entered the Yuseong Tourist Hotel in Daejeon 9 years ago and was informed of CCTV that someone was following, and said it would broadcast on the day of the ethics committee. CEO Lee is arguing that everything should be disclosed.

On the night of the 20th, Kim Se-eui, CEO of the Garosero Research Institute, posted on the back of the notice posted on the Ga Se-yeon YouTube channel community on the night of the 20th, saying, “And I have received an interesting tip these days.” “The CCTV entering the Yuseong Tourist Hotel… CCTV…Is there really a Ga Se-yeon? Wouldn’t it?” he wrote. CEO Kim said, “This Wednesday, that is, Wednesday, June 22, at 7 pm… The Garosero Research Institute will be broadcasting live in front of the People’s Power Company.”

In response, CEO Lee Jun-seok met with reporters at the National Assembly Hall on the 22nd and answered, “I don’t know the evidence well” to the question ‘It seems that Ga Se-yeon is revealing additional evidence’.

Earlier this morning, CEO Lee said, “If there is such a thing, disclose it all” when asked about ‘I will release the CCTV video at the time the ethics committee will be held in Ka Se-yeon tomorrow’ in a telephone connection with BBS radio’s ‘Jeon Young-shin’s Morning Journal’ this morning.

Read Also  Heo Kyung-young, the reason why he called after spending 1.3 billion won… "Don't put me on TV"

However, CEO Lee admitted that he had stayed. In response to the question of ‘Yooseong Tourist Hotel in Daejeon, it is a video of entering the hotel, can you go to the hotel for other things, do you have any memories of going there?’ But I have to explain exactly what it has to do with it, but without that, I simply do not know what CCTV is being disclosed.”

In particular, in response to a question from the host, when asked if there was any change in the position that the allegation of sexual remuneration itself was groundless, and that ‘the party representative, Kim Cheol-geun, met before the presidential election to see if there was any influence, the memorandum has nothing to do with this’. We have never said anything other than that, and we are in that position.” Here, the person that Director Kim Cheol-geun met refers to the director of Mr. Jang, who is known to be involved in the suspicion of hospitality.

Regarding the future response, CEO Lee said, “I will not make a quick decision in advance.” “Now, the ethics committee is saying a lot anonymously, very unusually.

Representative Lee Jun-seok met with reporters after attending two events in the Assembly Hall this morning, and most of them did not know or answered.

CEO Lee met with reporters after finishing the congratulatory speech at the ‘2022 National Assembly Industry-Hakjeong Joint Symposium – Future and Policies of the Medical Device Industry’ discussion at 10 am on the same day, and when asked if he would go to the ethics committee tomorrow, “I do not know because I have not heard anything from the ethics committee.” “There was no request to attend,” he said.

In response to the media today’s reporter’s question, ‘Did CEO Lee Jun-seok give instructions about the process of going to see Mr. Jang, director Kim Cheol-geun, after the broadcast of Ga Se-yeon?’, CEO Lee asked, “What are you talking about?” After further explanation, he asked, ‘That kind of thing appears in the call recording (CEO Lee and Mrs. Jang) immediately after the broadcast on December 27th of last year,’ but CEO Lee did not respond.

After the congratulatory speech at the ‘Art and Culture Exhibition through AR and VR’ held at the National Assembly Hall hosted by Lee Jong-bae’s office this morning, Lee met with reporters and was bombarded with questions related to the Ethics Committee. CEO Lee said, “I have not received any requests to attend,” and answered “yes” to the question, ‘Is the position that warnings are still excessive?’

Next, in relation to the broadcast content of Ga Se-yeon, when asked, ‘Is it true that CEO Lee had a meal with Director Jang and Seong-jin Kim (IKAIST CEO) on August 15, 2013?’, CEO Lee answered, “What are you talking about?” He did not answer media today’s reporter’s questions such as ‘Didn’t you drink or eat with them?’ ‘Tell me what happened that day, so the suspicions will be resolved’, ‘When did you know that Kim Cheol-geun, the chief of political affairs (investment of 700 million won to Director Jang), wrote the memorandum (in the process of writing the memorandum) CEO Lee) asked questions such as ‘wasn’t he involved in advance?’

In a press release on the 20th, the People’s Power Central Ethics Committee announced that it would hold a committee meeting at 7 pm on the 22nd to deliberate on issues in which disciplinary procedures were initiated according to the resolution of the committee held on April 21st.

The Central Ethics Committee said, “At this meeting, according to the results of the April 21 meeting, it reviewed the written explanatory materials submitted by party members who were notified of the ‘disciplinary procedure’, and as a result of the 4.21 meeting, the ‘Ethics Committee Article 14 (Obligation to cooperate)’ )’, we plan to have party member Kim Cheol-geun (the party’s representative, head of political affairs) appear at the committee to proceed with the fact-finding process.”

Director Kim Cheol-geun admitted that he went down to Daejeon to meet director Jang, who is known as a host, on the night of December 27, last year, when Ga Se-yeon aired. Regarding the reason, Director Kim said that it was to avoid appearing on regular broadcasts for fear of affecting the election, but he did not answer the question of whether he promised to invest 700 million won in return. It is a question that needs to be elucidated as to the authenticity of the statement that Kim Seong-jin, CEO of IKAIST, provided entertainment (sexual entertainment) worth 1.3 million won to Lee Jun-seok on August 15, 2013 in the prosecution’s investigation record.

Wasabi terrorism after I found out I was Korean… Japanese sushi restaurant controversy
Posted onJuly 5, 2022July 5, 2022