The “Tokyo 2020 Olympic Torch Relay Celebration” was held as a non-spectator event using NTT’s latest technology to liven up the torch relay. Seiko Hashimoto, Chairman of the Tokyo Organizing Committee for the Olympic and Paralympic Games, Aki Taguchi, Official Ambassador of the Tokyo 2020 Olympic and Paralympic Games,Satomi Ishihara also took the stage, and the venue was live-streamed on YouTube as well as live VR on “REALIVE 360”. 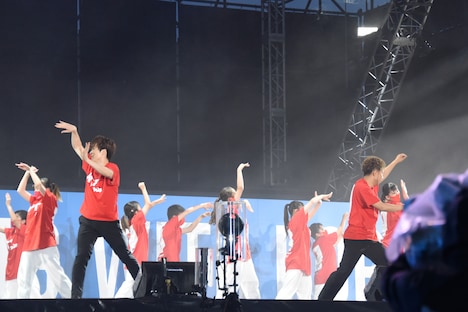 At the beginning of the event, USA and TETSUYA joined “Rising Sun -2020-” with kids dancers from Soma district in Fukushima prefecture, Mashiki town in Kumamoto prefecture and Nishihara village, and titled “NTT 2020 Special Dance-Connecting the future”. Show off a dance performance. Unfortunately, it was a stage in the rain, but the two praised the children, saying, “It was awesome!” USA said, “I think we were able to perform with our thoughts because everyone who has felt suffering and sadness.” TETSUYA said, “I want to continue to perform with the desire to energize Japan toward the future of children.” “I looked back on the stage. 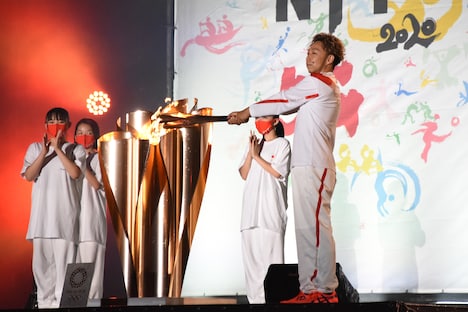 After that, while SAMURIZE from EXILE TRIBE welcomed, USA re-entered as the final torchbearer to this venue. The torch plate was ignited. USA, who finished the big role, said in a talk session with a relieved expression, “I was worried about the weather, but I was able to run with excitement.” TETSUYA, who watched the run in USA, smiled, “Isn’t the production more gorgeous than when I was? (Laughs), but it was very nice and beautiful” compared to when I ran at an event held in Osaka. I showed you.

Chairman Hashimoto said, “I felt the weight of the fire of Olympia in Greece so far,” and Ishihara said, “It was fantastic, dramatic, and very exciting. It made me feel better.” Reveal your impressions. In addition, USA, which was asked for an ale to the relay runner who connects the torch until the opening ceremony, sent a message saying, “I hope it will be safely done to Tokyo and become a torch relay that will illuminate the hearts of as many people as possible.” 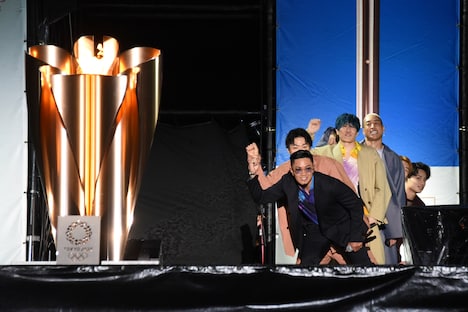 Following the performance by calligrapher Soun Takeda, we went to the GENERATIONS live stage. Here, a performance was unfolded using “Kirari!”, An “ultra-high presence communication technology” developed by NTT. After showing off the first song “You & I”, Ryota Katayose said, “It’s a song with a message that even if you’re away, you have one heart.” I thought it would be perfect for the theme, so I sang it. “ 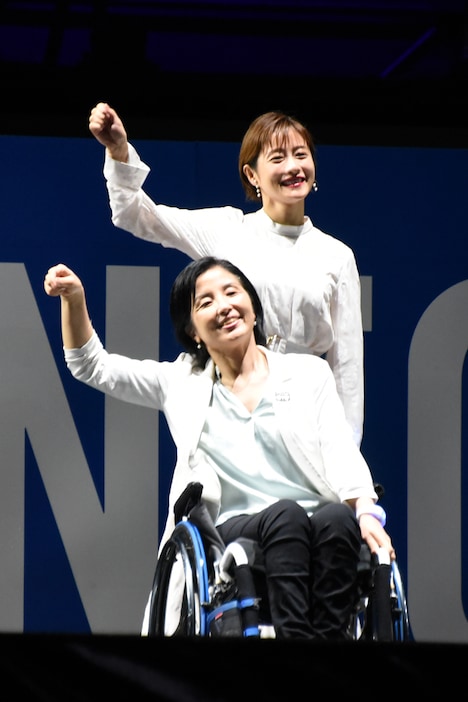 After that, USA, TETSUYA, Takeda, Ishihara, and Taguchi joined and performed a collaboration performance using “Kirari!”. GENERATIONS was surprised when the choreography of the EXILE “Choo Choo TRAIN” intro, in which each of the five danced, was cut out using “Kirari!” And immediately synthesized as a vertical row of dance images.

After “One in a Million -Miracle Night-“, which was fascinated by the video production and the performance with the female dancer, Katayose and Ryuto Kazuhara singing on the stage in “DREAMERS” use “Kirari!” Real-time “teleportation” to the NTT booth in front of the warehouse. In addition, there is a plan to transfer the appearance of Mandy Sekiguchi and Reo Sano to the audience seats where runners are seated and the NTT booth, creating a virtual sense of unity with the venue. At the end, “YMCA” was performed powerfully and the event was closed.

Images of this article (39 in total)

Other articles from GENERATIONS from EXILE TRIBE

Is Su Xiaotong’s boyfriend Zhao Haotian? What is the relationship between the two people meeting in the amusement park?

Two consecutive victories in the Olympics of tears...

Ayutthaya found 344 more covids, most of them...

Lewis Hamilton “I did everything and there was...

Reveals the number of 10 provinces infected with...

The results of the COVID-19 vaccination in...

May 15, 2021
We use cookies on our website to give you the most relevant experience by remembering your preferences and repeat visits. By clicking “Accept All”, you consent to the use of ALL the cookies. However, you may visit "Cookie Settings" to provide a controlled consent.
Cookie SettingsAccept All
Manage consent