·The election of the president of the Japanese Liberal Democratic Party is coming soon. What are the main candidates’ policy propositions and what are their advantages and disadvantages?

·What is the outlook for this election? Will it enter the second round?

(It takes about 5 minutes to read this article)

The competitive landscape of the Liberal Democratic Party’s presidential election is now basically taking shape, that is, Kono, Kishida, and Takashi are competing for hegemony. To a large extent, who can win will depend on the attitudes of the various factions in the party and their respective popularity among voters.

Kishida Fumio is 64 years old and comes from a political family. Both his father and grandfather were members of the National Assembly. Kishida has served as the Liberal Democratic Party’s National Assembly Policy Committee Chairman and Minister of Foreign Affairs.

In an interview with the media, Kishida once stated that if he becomes prime minister, he will promote constitutional amendments during his tenure, and strive for a referendum discussed by the Congress to realize the four amendments proposed by the Liberal Democratic Party, including adding emergency situations and clearly writing to the Self-Defense Forces. He claimed that, if necessary, it will explore changes to the Coast Guard Act and the Self-Defense Force Act.

Kishida’s main advantage is the faction with his own leadership. The Kishida faction currently has 46 members of Congress, and they basically support him in the election. Therefore, unlike other candidates, he does not have to run around to collect the signatures of 20 members of Congress. This also allows him to formally declare his participation earlier than other candidates. select. However, if Kishida wants to win the presidential election, he has to win the support of other factions in the party.

Although Kishida’s seniority is not bad, his presence in the party and the public has not been strong, and his popularity is not high.

Takaichi Sanae is 60 years old and was elected to the House of Representatives for the first time in 1993. She has served as the chairman of the Liberal Democratic Party’s government affairs investigation, the minister of general affairs and other positions.

On April 21, 2015, at the House of Representatives of the Japanese Diet, the then Prime Minister of Japan Abe (second from left) and then Minister of Internal Affairs and Communications Sanae Takaichi (second from right) discussed.Photo by Xinhua News Agency reporter Ma Ping

Gao City emphasized that “the ultimate mission of the country is to protect the lives and property of the people, territorial waters and airspace, resources, and national sovereignty and reputation”, claiming that the achievement of this mission will “gamble everything on one’s own.” She advocated amending the expressions in Article 9 Item 2 of the Constitution regarding not maintaining combat power and denying the country’s right to engage in war, to be clearly written into the “National Defense Forces.” She also advocated strengthening Japan’s defense capabilities and strengthening economic security to deal with security threats such as foreign cyber attacks and the outflow of cutting-edge technology.

Takaichi is the second woman to run for president of the Liberal Democratic Party after the current governor of Tokyo, Yuriko Koike. If elected, she will become Japan’s first female prime minister, which will help her to obtain votes from the grassroots, especially female party members. But on the other hand, Gaoshi’s conservative stance on women’s rights may dilute her female advantages, and in the conservative Liberal Democratic Party, especially for older party leaders, Gaoshi’s female identity may become another Disadvantage.

Kono Taro: Heresy in the Party

Kono Taro is 58 years old and comes from a political family. His father Yohei Kono and grandfather Ichiro Kono are well-known politicians in Japan. He has served as the Minister of Foreign Affairs, the Minister of Defense and other positions. He is currently the Minister of Administrative Reform and is in charge of the new crown vaccination work. 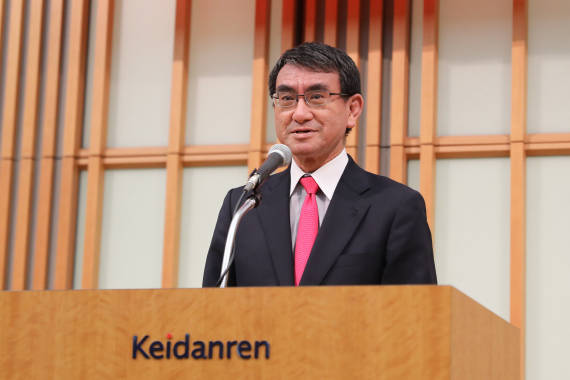 On December 3, 2018, in Tokyo, Japan, Taro Kono, then Minister of Foreign Affairs of Japan, delivered a speech at the reception “Commemorating the 40th Anniversary of Reform and Opening Up and the China-Japan Economic Cooperation Seminar”.Photo by Xinhua News Agency reporter Du Xiaoyi

Kono advocates strengthening defense capabilities and re-examining national security strategies to deal with new threats; enhancing the defense capabilities of the Self-Defense Force in new areas such as cyber, space, and electromagnetic waves; strengthening relevant mechanisms and deterrence to counter “unilateral attempts to change the status quo”; Build an “alliance that defends basic values ​​such as freedom, democracy, the rule of law, and human rights,” and establish Japan’s solid position in the international community.

Kono’s biggest advantage is his popularity among the people, and he currently leads the polls. Kono’s popularity mainly comes from his daring to speak and do style and his strong vocal ability. When he was a young congressman, he dared to make a different voice in the Liberal Democratic Party. After Kono took up important posts such as Minister of Foreign Affairs and Defense, he had a high exposure rate in the media. Since the beginning of this year, Kono has been in charge of the new crown vaccination work and continues to be in the spotlight. According to Japanese media reports, the Minister of the Environment Shinjiro Koizumi, who is very popular among the public, has decided to support Kono, which may further increase Kono’s popularity.

However, Kono’s daring to speak and do not only brought him popularity, but also made him appear maverick in the party. His views on many issues are liberal and incompatible with the conservative Liberal Democratic Party. Some Japanese media call him “heresy.” Even the leadership of the Aso faction that he belongs to has views on him.

What’s the outlook for the election

Judging from the rules of this presidential election, the candidates’ votes come from two aspects, namely, votes from members of Congress and votes from grassroots party members. The direction of the former is mainly determined by the intentions of the faction in the party, while the direction of the latter is basically consistent with the support rate of the polls.

There are seven main factions in the Liberal Democratic Party. At present, the Kishida faction basically supports Kishida. The Hosoda faction has decided to support Takaichi and Kishida. The attitude of the other factions is not clear. Judging from the votes of members of the Diet, Kishida, Kono, and Takashi each have their own advantages, and it is temporarily impossible to predict which one will have the better. According to the polls, Kono and Kishida are leading, while the high market is relatively lagging behind.

With at least three people running for the election and no candidate has an absolute advantage, it is very likely that the second round of voting will be held in the Liberal Democratic Party presidential election. In the second round of voting, the votes of members of Congress will be the dominant factor, and the one who gets the most votes in the first round of voting may not be the last laugh. This will also bring more uncertainty to the election results. (Reporter: Liu Zan; Editors: Sun Ping, Xie Binbin, Wang Shen)Return to Sohu to see more

The seller brought the grass to be rich and fried for sale. thousands of good income per day Believe that it can cure disease – Fresh news

Passing an escalator, an angry man kicks the...

Woman was hit and asked to apologize, and...

45 Republicans against the senator: Trump’s impeachment...

January 27, 2021
We use cookies on our website to give you the most relevant experience by remembering your preferences and repeat visits. By clicking “Accept All”, you consent to the use of ALL the cookies. However, you may visit "Cookie Settings" to provide a controlled consent.
Cookie SettingsAccept All
Manage consent