GS Caltex setter Hyejin Ahn rejoices with her teammates after scoring a serve during the 2021 Cup match against Ginseng Corporation at Uijeongbu Gymnasium in Gyeonggi Province on the 23rd. Provided by KOVO

Hyejin Ahn (GS Caltex), who played a key role in Korea’s advance to the quarterfinals by putting in a tricky serve at the Tokyo Olympics, gave the team the first victory by serving in the cup competition as well.

GS Caltex’s set score 3-1 (25-20, 25-19, 17-25, 25-20) in the first match of Group A of the 2021 Uijeongbu Dodram Cup Professional Volleyball Tournament against KGC Ginseng Corporation held at Uijeongbu Gymnasium in Gyeonggi Province on the 23rd. ) was won. Last year, GS Caltex, who defeated Kim Yeon-kyung’s Heungkuk Life Insurance and won the cup, came one step closer to winning the championship for the second year in a row with this victory.

GS Caltex setter Hye-Jin Ahn scored a whopping six points only with a tricky serve, and she shone in the cup competition following the Tokyo Olympics. In the first set 7-7, Hye-Jin Ahn broke the balance by scoring a serve, and then scored consecutive goals from the left, bringing the mood completely.

Hye-Jin Ahn played an active part in the second set, scoring two points as a serve each in the beginning and the end. Ahn Hye-jin, who scored 1 point in the 3rd set, led the team to victory by scoring as a serve in every game in the 4th set. In addition, even if no score was scored, there were several scenes where he shook the opponent’s receiving line and regained the right to attack.

Hye-Jin Ahn is a setter who can serve well enough to rank 5th in serve scores (0.254 per set) in the last 2020-21 V League. In the match between Korea and Japan at the Tokyo Olympics, he was put in as a one-point server at the end of the 5th set, effectively serving and contributing to a miraculous comeback victory, and also shook the Turkish receive line with a tricky serve falling in the quarterfinals against Turkey. 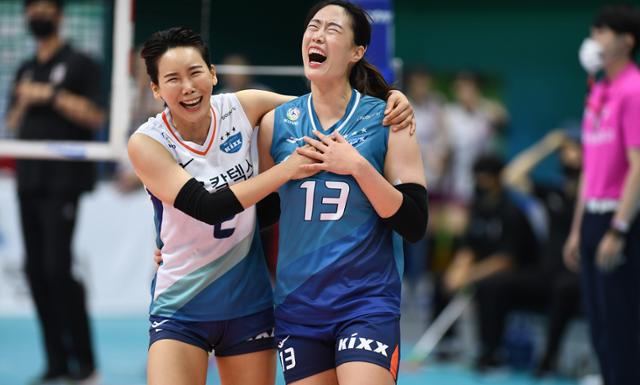 Oh Ji-young (left) and Choi Eun-ji, who transferred the team from Ginseng Corporation to GS Caltex. Provided by KOVO

Among the Tokyo Olympic members, Hye-jin Ahn, Oh Ji-young (above GS Caltex) and Hye-sun Yeom, Eun-jin Park (above Ginseng Corporation), excluding So-young Lee (Ginseng Corporation), participated in the match. In addition, Choi Eun-ji and Oh Ji-young, who transferred teams from Ginseng Corporation to GS Caltex, and Park Hye-min (19 points), who moved from GS Caltex to GS Caltex, all played against their former team, drawing attention. At GS Caltex, Kang So-hwi (16 points), Choi Eun-ji (15 points), and Yu Seo-yeon (16 points) led the attack with even performances, and Libero Oh Ji-young recorded a receiving efficiency of 45.5%. Park Hye-min did a good job with 19 points, but did not see the light of the team’s defeat.

‘My Way’ Professor Lee Soo-jung, lawyer’s husband revealed for the first time “We got married two months after we met”

On the field with bleeding legs; Fans applaud...

Three positions, six teams; Who else is...

October 30, 2020
We use cookies on our website to give you the most relevant experience by remembering your preferences and repeat visits. By clicking “Accept All”, you consent to the use of ALL the cookies. However, you may visit "Cookie Settings" to provide a controlled consent.
Cookie SettingsAccept All
Manage consent