Gyeongnam FC and Gwangju FC, the 1st in the league, challenge to hunt for points 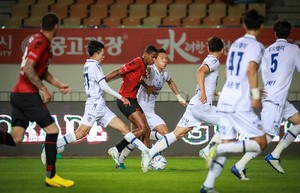 Gyeongnam FC will start hunting for points against the league’s No. 1 Gwangju FC.

Gyeongnam will play the 23rd round of ‘Hana One Q K League 2 2022’ against Gwangju FC at the Gwangju Soccer Stadium at 8 pm on the 26th.

Gyeongnam did not lose 4 matches in a row, but did not accumulate points with 1 win and 3 draws. The performance itself has changed stably compared to the beginning of the season. From the time key players such as Kim Young-chan returned from injury, coach Seol Ki-hyun’s tactics prepared for this season have been improving.

The only disappointing thing is the recent score. All the teams that meet Gyeongnam are preparing to stop Thiago and Hernandez. It means that the two players have excellent destructive power, but if interpreted differently, it can be seen that the support of the surrounding teammates is insufficient. Thiago and Hernandez’ shoulders became heavier as Willian, who was in the Brazilian triangle, moved to another team.

It is a time when the efforts of other attackers are required. Gyeongnam often wins when a foreign striker like Thiago scores a goal, but when it does not, it is difficult to accumulate points. With Willian’s transfer, Hanam and Chung Chung-geun, who will be given more opportunities to play, become more urgent.

Moreover, Gwangju is the team that boasts the best defense in K League 2 with only 16 runs in 20 league matches. An aggressive play that can shake the Gwangju defense should come out. Thiago and Hernandez will have more opportunities if the other players show good performances.

As coach Seol Ki-hyun said, “We must find a solution by doing what we are good at,” attention is paid to whether the key to victory can be found with an attack.