Dengue fever cases in Hanoi are on the rise, and many hospitals are overflowing with treatment beds, forcing patients to lie in bed or go home.

Thanh Nhan General Hospital is one of Hanoi’s medical facilities where many dengue patients have been hospitalized recently. The whole hospital treats around 250 people, and in particular, the occupational diseases department has as many as 100 in-patients.

Dr Nguyen Thu Huong (Department of Occupational Medicine) said that the number of patients has increased sharply since the beginning of October and that beds are always full in all departments. Since the beginning of the year, the hospital has received nearly 1,500 dengue fever patients, 30 to 40 percent of whom are seriously ill, including kidney failure, low platelets, and high liver enzymes.

“Usually, patients with severe symptoms need to go to hospital. However, because there are so many patients, we have to send them back ‘a little early’ the next day to prepare a bed for treatment,” said Dr.

Ysbyty Bach Mai, a tropical disease center, is also overflowing with dengue fever patients. There are up to 6 beds in a ward of around 15m², each for 2 people, and patients have to share. Hepatitis treatment rooms are used with dengue patients.

Hang Mo (27) was admitted to hospital because her gums were bleeding on the third day after she had a fever. After lying down for a day, the overload makes her more tired. “I want to leave the hospital quickly. I can’t stand this situation at the bedside anymore,” he said.

Explaining the overload, Cuong said the infrastructure of the Tropical Disease Center was old, outdated, cramped and lacking in materials and machinery. At a time when dengue cases are increasing, this shortage is making patients suffer.

The National Hospital for Tropical Diseases, which is at the forefront of treating infections, has around 90 to 100 in-patients, 10 to 20 a day. In some cases, more than half of the patients treated in emergency departments have dengue fever. Dr Pham Van Phuc, deputy director of the intensive care unit at the Central Hospital for Tropical Diseases, said that the number of seriously ill patients had risen suddenly. “Patients who are admitted early have a good result and low impact. However, many cases come late and are very difficult to treat,” said Dr. Phuc added that a 31-year-old patient who was in the hospital too late on November 5 died of the disease. 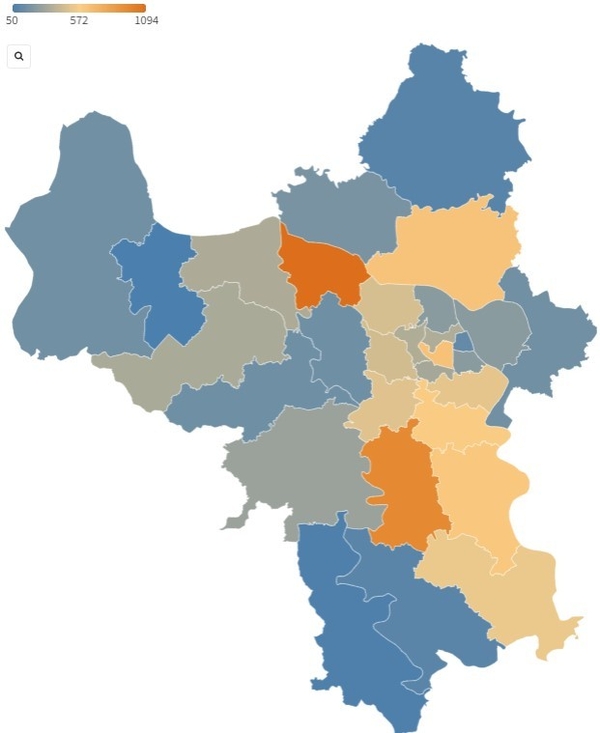 An official from the Hanoi Center for Disease Control and Prevention (CDC) said the number of dengue fever cases continued to rise during the week of October 28 to November 3, with 58 additional cases reported in many provinces, including Hoang Mai, Thanh Oai, Bac Tu Liem, Ha Dong and Thanh Tri said the city recorded more than 10,700 cases and 12 deaths, a 3.5 times increase from the same period in 2021, due to accumulated dengue fever since the beginning of the year , and more than 200 cases occurred in Bung Village (Tattak). Currently, Hanoi is reaching the peak of the dengue epidemic, and the CDC predicts that cases will continue to rise in the near future, peaking in November.

Before the rapid increase in dengue cases, hospital representatives said that making hospital beds was a difficult problem.

A representative from Hanoi’s Ministry of Health suggested that states fight dengue fever in the same way they fight COVID-19.

According to the representative of the Ministry of Health, the most important solution is comprehensive environmental sanitation. This is because many areas and autonomous regions are urbanized in a highly populated state, and construction, debris and waste are not organized, creating favorable conditions for mosquitoes to reproduce and dengue fever to increase rapidly.

Dr. Cuong recommends that anyone with severe symptoms should go to a medical facility and get tested. Symptoms include low blood pressure, abdominal pain, liver fatigue, cold hands and feet, vomiting, bleeding under the skin, nosebleeds, bleeding gums, diarrhea, bleeding, and excessive menstruation in women. At this point, the patient must be hospitalized for treatment.

In the case of home monitoring, the doctor mentions that the patient should not mistakenly prescribe the antipyretic drug paracetamol. Overuse of paracetamol or too short intervals between doses can affect the liver. In particular, dengue fever puts patients at risk by making liver enzymes available. The correct dose of paracetamol is 10-15 mg per body weight. Each dose is taken 4 to 6 hours apart and uses physical measures to lower body temperature while waiting for the next dose.